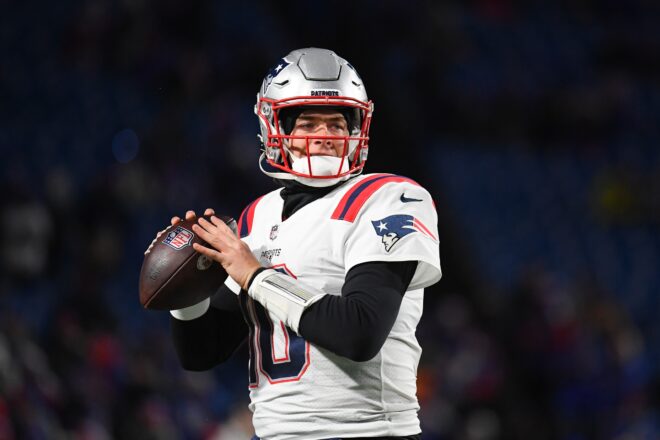 Words to be updated: “determined”, “methodical”, “stubborn”, “persevere”, and maybe nine or ten other similar words. Task at hand: Insert a photo of Bill Belichick to each updated word.

On a bitter cold and windy night at Highmark Stadium outside of Buffalo, with the wind blowing left to right at 50 miles an hour, Belichick passed three times and ran the ball 46 times, and had just enough to outlast the Buffalo Bills, 14-10 on Monday Night Football. The Patriots are now by themselves as the top team in the AFC, as well as the AFC East, with a 9-4 record and a seven-game win streak.

Belichick has authored some magnificent game plans, mostly on defense, in his legendary career. For this game, Mac Jones threw only three passes in the entire game, completing two of them. Belichick instead pounded the rock all game long, and knew deep down inside that he had enough defense to win the game. The Patriots wound up with the wind in the fourth quarter, and still played it close to the vest. This game was in abstract a hideous coaching mismatch, as Belichick literally pantsed Sean McDermott and kicked his can all night long.

Each team scored one touchdown, and both of them came off a turnover.

The Patriots struck first. On their second possession, Josh Allen mishandled a snap and fumbled the ball, with Lawrence Guy recovering at the Patriot 31. On the third play of the ensuing drive, Damien Harris took a toss left, then saw a huge hole opened up thanks to seal blocks by N’Keal Harry, Isaiah Wynn and Jakob Johnson. Harris burst through it, and the Bills had no one in second level coverage. The result was a 64-yard sprint to the house and a 6-0 Patriot lead. Rather than try a conversion kick into the wind, the Patriots went for 2 and got it on a left end burst by Brandon Bolden.

Buffalo got the ball back, and thanks to a holding call on Spencer Brown, the driver stalled at the 28. Matt Haack came on to punt, and the Patriots had two receivers in punt return formation. Gunnar Olszewski was up close, and Harry was deep. What Harry was actually doing out there is subject for debate, but the ball bounced near Harry and shot straight up in the air. Harry either lost track of the ball or was momentarily confused, and the ball nicked his facemask ever so slightly on the way down. Siran Neal fell on the ball, but the replay official saw the nick on the facemask and awarded the ball to Buffalo after the officials on the field gave the ball to New England. On the first play, Allen hit Gabriel Davis on a right slant pattern with Jalen Mills in coverage for a 14-yard touchdown. The kick conversion made it 8-7 Patriots.

The rest of the game was brutally physical, methodical, and carefully managed. Belichick decided early on that he had enough defense to win the game, and he was right. He got two field goals from Nick Folk, the defense yielded a 35-yard field goal by Tyler Bass, and that was it. The rest of the game was the Patriots relentlessly pounding the ball against the Buffalo defense, and the Patriots continuing their opportunistic defense ways of late, making just enough plays to win the game.

The game was in the balance late in the fourth quarter with Buffalo driving towards a touchdown to put them out in front. Their final drive of the game began at their 20, and Allen immediately got things going with a terrific 26-yard sideline toss to Stefon Diggs. Devin Singletary ran for 17 yards, and the Bills wound up at the Patriot 14 with just over two minutes left and the Bills down to only one timeout left. Singletary ran for one yard, stopped by Devin Godchaux (who should get game MVP with ten total tackles, six solo) on first down. Allen misfired on second down when he tried to hit Diggs in the right corner of the end zone.

On third down, Allen curiously forgot about the play clock and was called for a delay of game. On third and 14 at the Patriot 18, Allen was flushed from the pocket, was almost sacked twice, rolled right and tried to hit Dawson Knox in the end zone but Adrian Phillips knocked the ball out of Knox’s hands at the last minute. And on fourth down, an Allen misfire in the left flat intended for Cole Beasley was knocked down by Myles Bryant. The Patriots were able to run out the final 1:55 to close out the game.

As a team, the Patriots finished with 222 yards rushing and a 4.8 average per carry. Harris had 111 yards on ten carries, helped by his 64-yard touchdown run. He left the game in the second half with a sore hamstring. Rhamondre Stevenson had 78 yards on 24 carries, and would have had better numbers if not for two carries for minus-9 yards to begin the fourth quarter. Bolden had 28 yards on four carries.

It is almost folly to discuss the Patriot passing stats. Jones was 2 of 3 for 19 yards, with a 12-yard toss to Jannu Smith in the first quarter and a 7-yard screen toss to Bolden in the fourth quarter.

Allen finished 15 of 30 passing for 145 yards, one touchdown and a 75 passer rating (Jones had an 84 rating with all of his three passes). Allen was also the leading rusher with 39 yards on six carries. Diggs had four catches for 51 yards.

The three passes attempted in a victory are the fewest since Buffalo beat the Jets in 1974 with only two passes attempted. Jones said in his press conference that all anyone cares about is the win, and it was a huge win for the Patriots. The willingness to stick with the game plan in the windy conditions paid off for the Patriots, and this win could go a long way come playoff time.

The Patriots get a bye week next week, the latest bye week since when the NFL started scheduling bye weeks. In two weeks they will head to Indianapolis to take on a Colts team which has been terribly inconsistent, sometimes very good and sometimes very bad. Following that, the Patriots get the Bills again at home.

The Patriots are the only team in the AFC with nine wins. They have a game and a half lead over the Bills in the division, and are in control of their playoff destiny. The Patriot makeover continues, and against a tough team in a tough place to play on a tough weather night, the Patriots proved to be the much tougher team.

Sometimes you really have to step back and marvel at Belichick, even though it’s something that is timeworn and something you just take as given from the coaching GOAT. Watching what the Patriots did on Monday night was both exasperating and astonishing.

And in the end, all that mattered was the “W”. The Patriots are definitely back, and the NFL is officially on notice.

By: Mark Morse
Today I am going to give a wrap-up of the East-West Shrine game practices.  The Patriots coaching staff has been very hands-on.  Steve Belichick arrived…
21 hours ago