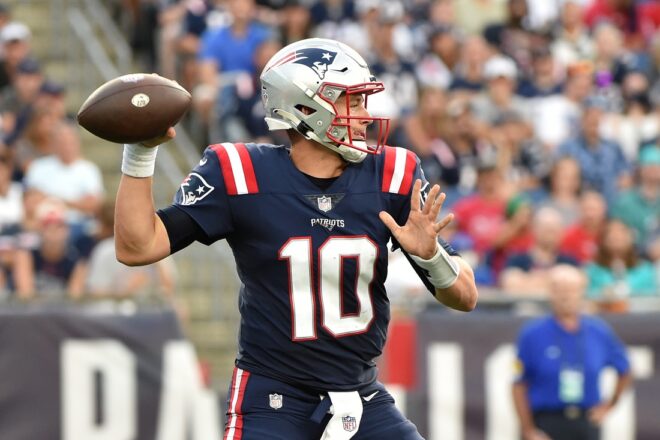 The Buffalo Bills will be the best team the Patriots have faced all year.  They are playing in Orchard Park, on the Monday Night Football national stage, and in temps that will be below freezing with a 50% chance of snow.  This is a must-win game for the Bills if they want to win the Eastern Division.

OL – On the Offensive Line you will not find any superstars, but they are a tough, efficient, and real lunch pail bunch that brings it every game.  Left Tackle Dion Dawkins is a very reliable player that plays all the downs.  He has given up just 4 sacks all year, but two came on Thursday vs New Orleans.

Right Tackle has been Daryl Williams who has played all 11 games at various positions, will probably stay in the lineup at Guard when Spencer Brown returns.  Bobby Hart also returns this week and gives them a solid backup.

Ike Boettger has been a rock at Left Guard, holding the line together.  Mitch Morse is a very underrated Center.  The former starter from Kansas City is a very physical player.  He has played nearly every snap and is as good a run blocker as he is a pass blocker.

Jon Feliciano has been designated to return from IR and may end up in the starting lineup.

WR – Everything is keyed off Stephon Diggs.  He is hard to handle.  JC Jackson has tried and failed at covering him one-on-one.  Diggs has 67 catches on 107 targets for 847 yards, 12.6 avg, and 7 TDs.  He is well on his way to a 1000 yard season.  I should expect him to be double-teamed in man coverage, freeing up Jackson for single coverage on a lesser WR.  Last season he made Jackson look slow on crossing routes.

Cole Beasley is a great possession receiver that was signed as a Free Agent from Dallas in 2019.  He has 62 catches on 79 targets for 530 yards 8. 5 avg, 1 TD.  Beasley is one of the most reliable receivers in catch percentage in the league. He is especially tough on third down.  The comparison to Julian Edelman is quite accurate.

Emmanuel Sanders came by way of Free Agency from New Orleans.  He has 36 catches on 61 targets for 559 yards, 15.5 avg, and 4 TDs.  Sanders will occasionally run the Jet Sweep which he has done twice this year for a 15.5 avg

TE– Dawson Knox is emerging as a top-line TE in the league.  Not only is the former Ole Miss Rebel known for his blocking, but his pass-catching has also come a long way.  Knox has 31 catches on 41 targets, 415 yards, 13.4 avg, and 7 TDs.  A long way from his college days when the walk-on had zero TDs in his college career.  He did have an 18.4 avg on his 15 catches in his Junior season which prompted him to apply for the draft.  Buffalo snatched him up in the 3rd round of the 2019 draft.

Former BC TE, Tommy Sweeney is his backup.  Sweeney is more of an inline player than Knox.  Sweeney was also taken in the 2019 draft, in the 7th round.

The Bills overall Defense is #2 in Points Per Game Allowed (Patriots are #1).  They are 3rd in 3rd down efficiency and 7th in the Red Zone.  The Buffalo Rush defense is #2 in the league, giving up just 3.7 yards per carry.  Their 96.6 yards against is 6th in the league.  The Bills Defense is 2nd in Takeaways with 24 (Pats are 3rd with 21).

DL – The Bills are stout across the line with pass rushers Greg Rousseau and Jerry Hughes and Interior run stuffers Star Lotulelei and Ed Oliver.  They are the number one team in the league on getting pressure on the QB and,  have 21 sacks as a team.

Rousseau was the team’s 1st round pick this year out of the University of Miami.  He has 37 tackles including 3 sacks and an INT.  Hughes is a 12-year veteran that is more like an OLB than DE.  He can be run at and, has just 9 tackles in 11 games, 6 of those were sacks.  Lotulelei is an immovable object.  At 6’2 “, 315 lbs he is short and compact.  Lotulelei is back for this game.  He makes it difficult for O-lineman to handle one-on-one, keeping the LBs clean to make plays.  Ed Oliver was the 1st Round number 9 overall pick in the 2019 draft out of Houston University and has 22 tackles and 4 sacks.  He is extremely hard to handle and can cause havoc if the line is not up for his brand of football.

LB – Tremaine Edmunds is back for this game.  Without him, they are a different team.  He leads the team in tackles with 63 despite missing two games.  The 6’5”, 245 lb Inside LB from Virginia Tech was their 1st pick in 2019.  He is just 23 years old and is one of the best players under 25 in the league.

Matt Milano, a former BC Eagle inside LB, plays the Weakside LB.  He was a Free Agent this year and resigned with the Bills, the team that drafted him.  He is third on the team in tackles with 57.

A.J. Klein is a 9-year veteran that was originally drafted by Carolina in 2013.  The Iowa St Cyclone has 31 tackles this year.  They are pretty thin at the backup linebacker position.

DB – You have to start with the loss of CB Tre’Davious White.  His loss to a season-ending ACL injury last week is huge.   He had 41 tackles. 6 pass breakups and 1 INT.  He was the leader of the secondary.  Dane Jackson should be the replacement, but look for him to be picked on if left in man-to-man coverage.  Taron Johnson is listed as the number one LCB, but I see his role more as the nickel corner.  He will see plenty of playing time.  Levi Wallace is the starting Right Cornerback.  He has 40 tackles on the season and 2 INTs.  Safety Jordan Poyer is the thumper in the secondary.  He has 58 tackles, and 5 INTs on the year.  The other safety is no slouch either.  Michah Hyde will take your lunch money if you are not careful.  Hyde chipped in with 44 tackles and 3 INTs.  They are opportunistic ballhawks.

Tyler Bass was the kicker I wanted the Patriots to draft rather than the unforgettable Justin Rohrwasser.    The Georgia Southern kicker is 23-24 on FGs and 34 of 34 on Extra Points.  He has been kicking in Buffalo now for two years and has adapted well to the weather in Buffalo.

Matt Haack is the punter that replaced Corey Bojorquez, the former 2018 Undrafted Free Agent signee of the Patriots.   Ironically, Bojorquez is the #9 ranked punter and Haack is 23rd.  Jake Bailey is #6.

Isaiah McKenzie is both the Kick and Punt returner.  He is ranked 4th in the league on Kickoffs with a better than respectable 24.9 average.   On Punts, he is 15th with an 8.7 average.  Patriots hold a big edge there with Gunner Olzsewki as the #2 punt returner in the league with a 12.52 average.  Marquez Stevenson only returned punts for one game.

Bottom Line  Who is going to dominate the trenches?  Who is going to impose their will on their opponent?  Can the Patriots establish the run game and out physical this team.  Some in the media have called Buffalo soft, especially after the Indianapolis loss at home.  The Patriots can beat this team, but they must win the turnover battle.  That means have Mac Jones play within the offense and not risk turnovers.  Play mistake-free football with no stupid penalties.  Take advantage of Tre’Davious White’s absence. The Pats must run the ball effectively in order to set up the play-action passes.  Look for screen passes to offset the Bills pass rush. They can’t settle for FG in the Red Zone

On Defense continue to do what they have been doing the last 6 weeks.  Be opportunistic and the more physical team.  Force Allen to be one-dimensional by taking away the run game.  Allen will make mistakes.  CBS Sports Levan Reid called Allen an arrogant arm.  He thinks he can make every throw.  Make him cough it up.

I am looking forward to this matchup and what should be a terrific  Monday Night game for 1st place in the division.