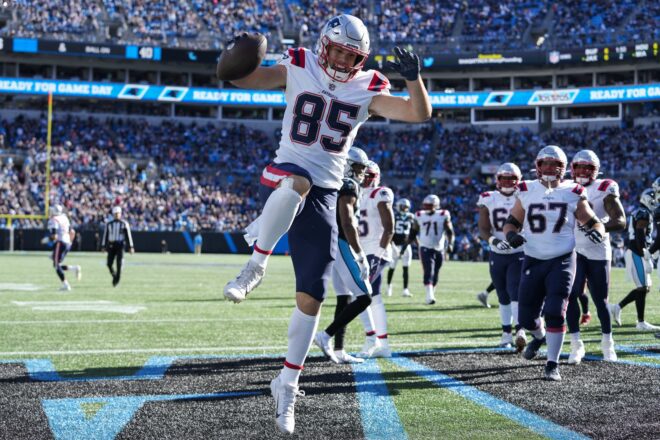 CHARLOTTE, N.C. — Halloween was a week ago, but Sam Darnold is seeing ghosts. Again.

The former Jet quarterback was picked off three times, one for a long touchdown, and was harassed and hurried all game long by the now-fantastic Patriot defense. Meanwhile, the Patriot running backs carried the day (while they were healthy), and the Patriots scored a rare victory over the Carolina Panthers, 24-6 on Sunday at Bank of America Stadium. Coupled with Buffalo losing on the road at Jacksonville, the Patriots at 5-4 are now a half-game behind the Bills for the AFC East lead.

Beating the Panthers is a rarity. This is the first win over Carolina since 2009, and it is the first win over Carolina here in Charlotte since the 2001 season. For you history buffs, that 2001 win was a 38-6 laugher which was a makeup of a September matchup which was postponed because of the September 11 attacks. The win gave the Patriots the two seed in the playoffs and set up the Snow Bowl/Tuck Rule game, the last game ever at old Foxborough Stadium. The Patriots can say that they beat these Panthers in Super Bowl XXXVIII at Houston, a wild 32-29 shootout win which remains one of the best Super Bowls ever.

Mac Jones was not the main reason why the Patriots won today, and he had some rough moments along the way. He was responsible for two first half turnovers which led to both Carolina scores, both of them field goals by Zane Gonzalez. Jones was strip-sacked late in the first quarter by Brian Burns, but the Panthers were only able to gain 12 yards and were held to a field goal to make it 3-0 Carolina.

The Patriots responded with a 75-yard, eight-play drive which featured a nice screen pass to Rhamondre Stevenson for 41 yards, and finished off by a 3-yard run by Damien Harris. On their next drive, Jones tried to hit Nelson Agholor on a right slant route, but some guy named Stephon Gilmore jumped the route and made the interception. Jones should have seen Gilmore lurking in the area, and the former Patriot All-Pro had an easy pick. After this turnover, Carolina only gained three net yards and settled for another field goal to make it 7-6 Patriots.

The defense played perhaps its best game of the season. Despite Christian McCaffrey coming back from a hamstring injury and Darnold regressing after a strong start to the season, Carolina still presented a formidable offensive opponent. That said, the Patriots bottled up McCaffrey very well until the second half when the Patriots were protecting a nice lead, and got after Darnold all game long.

Darnold’s first pick was costly. Midway through the third quarter, Darnold led Carolina on a nice drive from their 18 to the Patriot 21. Darnold managed to hit Chuba Hubbard with a nice dump pass over the middle for 33 yards with the Patriots in a blitz package, then later hit D.J. Moore on a 13-yard slant route to get the Panthers in good position to push it in. But on second down and 11, Darnold was flushed out of the pocket by Matt Judon and rolled left. He tried to hit Ian Thomas on the left sideline, but overthrew him and J.C. Jackson had an easy pick. Jackson took off, beat the initial players easily, and outran wide receiver Robby Anderson to the end zone for an 88-yard pick-six.

The next two Panther drives also ended in interceptions. Following the pick-six, Carolina drove to their 47, then Darnold dropped back and tried to hit Anderson with a quick hitter over the middle. Jamie Collins quickly leapt up and made a bang-bang interception, leading to a 37-yard field goal by Nick Folk. The next drive, Darnold took the Panthers from their 25 to the Patriot 14 going into the fourth quarter. McCaffrey had three touches for 57 yards, which is normal for their All-Pro running back. But on second down and six at the Patriot 14, Darnold floated a dangerous pass in the end zone to Moore, and Jackson was right in front of him and made a leaping interception. By now the score was 24-6 Patriots, and the rest of the game was mostly about running clock and getting out of there with a win.

The only thing Darnold can hang his hat on was that he avoided sacks for most of the afternoon. Judon finally got him in the fourth quarter, but his being rushed and hassled all game long pretty much shut down the Panther passing game. For the game, the Panthers were held to only 240 total yards.

Darnold was 16 of 33 passing for 172 yards and three picks. His passer rating was an abysmal 26.3, as the Patriots continued their dominance over this guy since his Jet days. McCaffrey led the team in both rushing yards (52) and receiving yards (54), something that usually happens. Beyond that, no other Panther was a major contributor on offense except for a play here and there.

Jones fared somewhat better, finishing with 12 of 18 passing for 139 yards, one touchdown (a 7-yard toss to Hunter Henry late in the first half), one pick and a rating of 85.2. In an eerie similarity to the Panthers, Stevenson led the Patriots in both rushing yards (62) and receiving yards (44). Carolina seemed bent on stopping Harris (30 yards on 15 carries), but Harris did score a touchdown.

Both Harris and Stevenson left the game in the fourth quarter due to injuries, which may be a concern moving forward. Brandon Bolden got in on the fun today with 81 all-purpose yards, so he and J.J. Taylor may have to be ready next week to help out.

Next week, the Patriots come home to try and win their second home game in a row as Cleveland comes to town. The defense will have a more dynamic quarterback to contend with in Baker Mayfield, but they handled Justin Herbert quite nicely last week out in Los Angeles.

The Patriots are now 4-0 on the road. They have won 3 in a row for the first time since 2019. Things are looking up for the Patriots, and thanks to Jacksonville upsetting the Bills, they are now within sight of the division lead. Of their four losses, only one of them (New Orleans) was a prohibitive loss.

This is more or less who we thought the Patriots were, to quote the late Dennis Green. Stout defense, stout running game, let the rookie quarterback manage the game and don’t ask him to win it. Three wins in a row now, with more hopefully to come.

READ NEXT:
Reasons Why Patriots Fans are Beginning to Panic
Posted Under: 2021 Patriots Season

By: Ian Logue
Some quick New England Patriots news and notes on this Wednesday.
8 mins ago