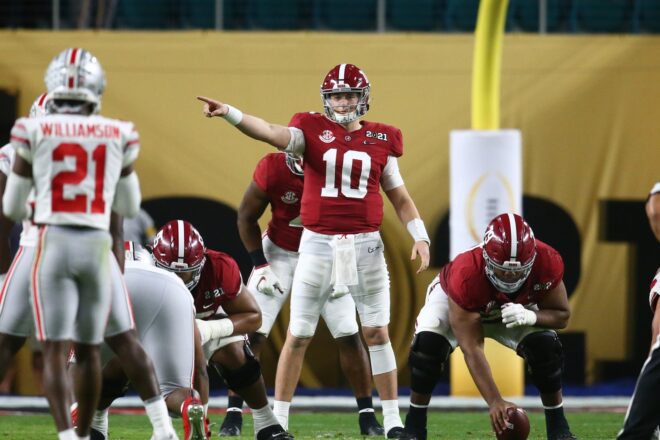 Here are some news and notes for this morning:

1) One thing that stood out after going back through some notes was a fact pointed out by the Athletic’s Jeff Howe following the Patriots practices last week.

While Cam Newton was clearly the #1 QB, what stood out was the fact that Bill Belichick made it no secret that Mac Jones is currently the #2 QB on the roster, which as Howe pointed out, was a little surprising.

Mac Jones worked as the No. 2 quarterback for the majority of practice. While this might seem obvious or a foregone conclusion, look at it from this angle: This was the first practice in front of the media, with seven of 10 OTAs behind closed doors. Belichick could have put Jones third or fourth in the pecking order to portray the first-rounder’s long climb up the depth chart, just two weeks after rookie camp, to stymie the Jones hype train in the media. Or Belichick could have used Jones as the No. 2 QB in the seven closed practices and rotated him from the bottom in the three open workouts to deliver the same message to anyone outside the team. Instead, this is a public portrayal that Jones is already the second-best quarterback on the roster. And while Jones absolutely should be, at minimum, the second-best QB on the roster, this indicates he’s off to a nice start in the coaches’ eyes, and there’s no need for semantics with the depth chart.

It’s actually a great point, and an even bigger indictment on Jarrett Stidham, who remains at the bottom a little over a year after being thought to be the club’s starting QB.  After the team came out of last year’s draft without taking a quarterback, the discussion centered on the fact that the former Auburn quarterback appeared to be on the verge of potentially starting the season.

Instead, the Patriots signed Newton, and that more or less slammed the door on that idea.

Again, several reports indicated that Stidham didn’t come out firing last preseason, nor did he show the competitive drive needed to seize the role and failed to go down without a fight.  Some seem to believe that didn’t sit well with the coaching staff and it’s going to be hard to see him surviving training camp now that Brian Hoyer is also back in the mix.

But it’s surprising how things are already starting to shake out and it’s hard to believe how different things were a year ago.  Especially for Stidham who, barring any drastic changes, may be playing elsewhere in the not too distant future.

2) While Patriots fans are rooting for Bill Belichick to eclipse former Miami Dolphins coach Dan Shula’s all-time win total, there’s at least one player who is apparently rooting against that potential accomplishment.

“I hope he don’t get it,” Marino told ESPN of Belichick. “I’m a Dolphin for life.  Coach Shula for life.  I don’t want him to get it.”

Marino played for the Dolphins for his entire career after being selected with the 27th pick overall in the first round back in 1983, with the quarterback retiring after the 1999 season.

Shula, meanwhile, retired in 1995 and remained as part of the organization after he walked away.  He passed away at the age of 90 just a little over a year ago on May 4, 2020.

His mark of 328 victories is now within reach for Belichick, who currently sits at 280.  With a handful of double-digit win seasons, it’s not out of the realm of possibility for him to overtake Shula, especially now that the team is seemingly headed back in the right direction.

As a result, with Belichick looking pretty spry at the age of 69, Marino may just find himself disappointed in a few years.

3) One cool story yesterday involved former Patriots receiver Chris Hogan, who appears to have moved on to a new career.

According to ESPN’s Mike Reiss, Hogan made the initial 25-man roster for the Cannons LC of the Premier Lacrosse League, beginning a transition now that his NFL days are behind him.

Hogan’s road hasn’t been easy, having not been drafted when the league made selections back in March.  Instead, he had to work his way onto the roster, which he said before he found out he made the team, it wasn’t that different from what he went through as a player in the NFL.

“To be able to make the 25-man roster, I think back to my days when I was on the bubble of getting cut [in the NFL], and that feeling,” said Hogan. “I certainly had it [Tuesday] night.”

Hogan’s club will take on the Redwoods at 7pm at Gillette Stadium and with Belichick likely at work prior to the match-up, it wouldn’t be a surprise if he takes in the game.  He’s a huge lacrosse fan and he’s already seen his daughter, Amanda, heavily involved in the sport.  She both played in college and she’s now in her sixth season at Holy Cross as the head coach of the women’s lacrosse program.

4) For anyone following the saga going on in Green Bay, it appears things are about to get a little interesting.

The Packers will hold their mandatory minicamp next week but they have no idea if Aaron Rodgers will be on hand when the team begins its three-day camp on Tuesday.

LaFleur remains hopeful Rodgers will be there, but wasn’t willing to comment further when pressed by reporters.

“I’ve got nothing to update on that situation, and you guys all know how we feel about it,” LaFleur said.

According to reports, Jordan Love hasn’t really been pushed during any of the recent sessions, with the most competitive moment coming during an 11-of-11 period which saw him sacked twice and intercepted once.  He was seen settling for checkdowns, dumping the ball off to running backs and not taking too many chances.

His most exciting throw was captured by the media, which you can view below:

Jordan Love sinks it in the net. The Lombardi is coming home. pic.twitter.com/k8o7FyqOFI

Nevertheless, LaFleur praised Love, who has been getting reps he normally wouldn’t have gotten if Rodgers had been there.

“You can tell he put some work in this offseason on his own,” LaFleur said. “I think the ball is really jumping out of his hands well right now. You know, it’s Day 2 of OTAs and all we’ve really done is thrown routes on air. We had some seven-on-seven, but you guys could see the team periods, they’re not full speed. We’re excited about some of the progress we’ve seen with him, but certainly, there’s a long way to go there.

“… I love his attitude and how he attacks it on a daily basis. He’s definitely matured over the course of the year. You can tell, like I talked about earlier, that he’s put in the time this offseason, not only just lifting and running and coming in in good football shape, but also, you can tell he’s put in the time in his craft in trying to continue to work on his mechanics, his fundamentals that are so critical to playing the position at the highest level possible. So he’s still got a lot to learn. I think he can tell you that, but he’s going to take it one day at a time. He goes out there with purpose. I like his mindset right now.”

For now, the Packers have remained adamant that they’re not going to trade the veteran QB.  They also extended Robert Tonyan, which further made it clear they expect him to be on the team in 2021.

5) It sounds like the Baltimore Ravens offense could look a little different next season.

According to ESPN’s Jamison Hensley, Ravens QB Lamar Jackson has apparently been taking more snaps under center this offseason, which could see a reversal of how he’s been used by the club.

As Hensley points out, Jackson’s almost never lined up under center, with the club instead having favored the pistol formation.

The idea behind putting Jackson under center would be to allow Baltimore to take advantage of the QB’s ball-faking abilities as well as his athleticism.  That would hopefully help him bounce back from an off year in 2020, which saw him finish with 10 fewer touchdowns and 3 additional interceptions.  Part of that can be attributed to his COVID diagnosis, which caused him to miss time and he admitted that being sidelined was tough for him.

“It felt like I didn’t play for a whole season,” said Jackson back in December after his return. “I was like, ‘It feels good to be back with my guys.’ Even in practice, walking into the locker room and stuff, I was like, ‘Man, I couldn’t wait to see you, your faces.’ It was like two weeks that I didn’t see those guys. I couldn’t wait to get out there and perform for those guys, because I know how much it would mean for us to win games.”

The 24-year old is likely hoping for a long-term deal as he’s set to earn just $1.771 million this year, although he’s already got some comfort in knowing he’s got a big payday coming up next season after Baltimore picked up his fifth-year option.

For now, one of the things he’s been focusing on is both getting better on the field, while also growing as a leader heading into 2021.

By: Steve Balestrieri
“A lot of guys were getting worried because when we were in the middle of camp, we were wondering what the plan was for our…
11 hours ago