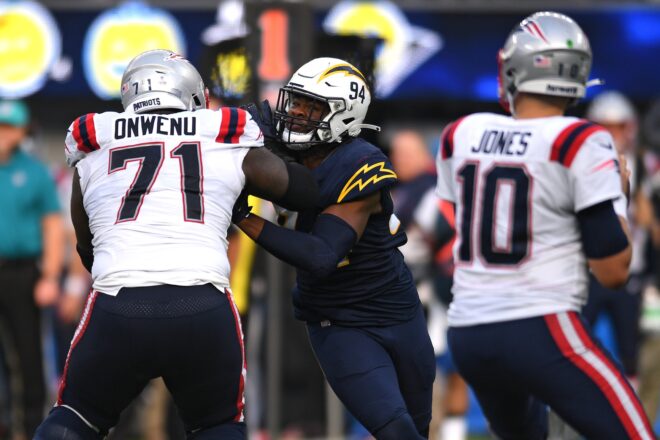 The New England Patriots traveled out to the west coast for a Halloween matchup with the Los Angeles Chargers looking to put together their first winning streak of the season.

Could the Patriots put together an upset victory on the road against quarterback Justin Herbert and the 4-2 Chargers? Take a look at all the best moments shared across social media throughout the game below.

Mac Jones looked like he was getting ready for a fight as he prepared to run out for the game. The #Patriots with a big win over the Chargers in LA and Mac looked like he got a TKO pic.twitter.com/iVFiomRVu5

In the first quarter, the Chargers jumped out to an early lead following an Austin Ekeler rushing touchdown, but Mac Jones responded in a big way on the next possession.

DAME TIME! Damien Harris pushes his way into the end zone for a #Patriots touchdown!!! pic.twitter.com/RISwbpVv2R

At the start of the second quarter, Justin Herbert gave the Chargers back the lead after finding Keenan Allen, but once again the Patriots  offense struck back with two Nick Folk field goals just before halftime to bring the game within one.

Former Chargers safety Adrian Phillips had some fun at his old team’s expense to help his offense with an extra scoring chance.

He wanted to play a game 🤡@Phillips_17 INT

During the third quarter, both defenses tightened up as both teams could only trade field goals, but by the time the fourth quarter rolled around, the Patriots again found themselves right in the game but needing some sort of spark to get points on the board.

Enter Adrian Phillips, who recorded his second interception of the game, but this time took it to the house for a Patriots 24-17 lead.

GO ADRIAN!!@Phillips_17 pick-six for the lead!

Matthew Slater ran in from the sideline to celebrate Adrian Phillips' pick-six. pic.twitter.com/iUjqnQHf5m

A Nick Folk 30 Yd Field Goal, his fourth of the game sealed the Patriots victory at the conclusion of a lengthy, seven-minute drive and a ten-point lead.

Although Justin Herbert added a garbage-time touchdown the Patriots would go on to complete their most impressive win of the season and move to .500 at 4-4 on the year.

The Patriots will travel to Charlotte to take on the Panthers next Sunday with a chance to get above. 500 for the first time.

That’s the kind of win I wanted to see #Patriots

Matt Judon is already looking ahead to next week's matchup with the Panthers after the @Patriots win today.

Two of his four career multi-INT games have come vs. New England.

Three-thousand miles from Foxborough, a home-away-from-home crowd appreciates the effort and celebrates the win for the ⁦@Patriots⁩. #ForeverNE pic.twitter.com/aT65tMgI8J

It’s something bout the vibes in LA…. 😎

Today was a great faukin day

Pats Nation Deep in LA!!
Love to see it!

Heading home with a win. pic.twitter.com/GEN6T4Rumm

I LOVE IT KEEP IT GOING😈 #bmorebegreat

By: Ian Logue
Some quick New England Patriots news and notes on this Wednesday.
20 mins ago