8 months ago at 6:30 am ET
Follow @SteveB7SFG
Posted Under: Patriots Report Card 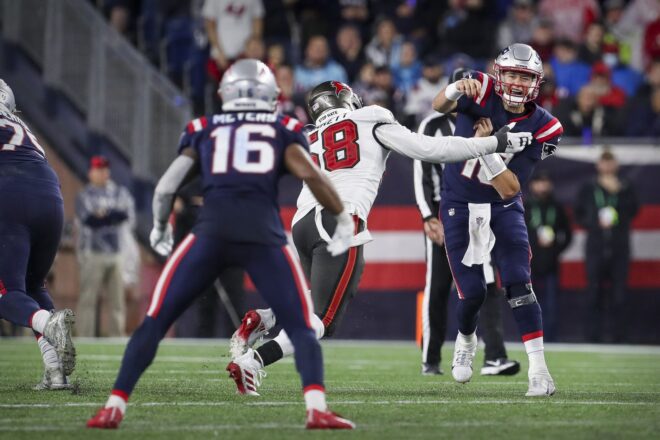 The Patriots ultimately lost in a rainy night game in Foxboro against the defending Super Bowl Champs. And as I wrote in my post-game analysis, there are no moral victories… but there are things to be encouraged by.

Before I write this, I have to preface this next statement by saying, I don’t believe this is a Super Bowl-caliber team at all. Okay, with that out of the way, this loss reminds me of the 2001 loss to the then-St. Louis Rams, “The Greatest Show on Turf”, who had already won a Super Bowl and were pegged as the next dynasty.

The Patriots had a new QB and were muddling along, the loss at Foxboro that November dropped them to 5-5. But the fact that they realized that they could hang with the Rams got the team to come together and gel. Sunday night’s game had much the same feeling. This was their best 60 minutes of football in quite a while. It was far from perfect (as we’ll see below), but this looked like a different team with a different vibe than the sluggish, sleepwalking team we’ve seen thus far.

That 2001 team didn’t lose again. There is no way that the same scenario is going to happen, however, you can definitely see where this may push them into playing much better football from here on.

So, here are our positional grades this week for the Patriots-Bucs game.

Mac Jones finished the night 31-40 with 275 yards passing and 2 TDs and 1 INT for a QB rating of 101.6. While all of the talk all week was the return of Brady to Gillette, the pressure on Jones in the big spotlight had to have been extremely high.

But with no running game (as in -1 yard), a porous offensive line, and an aggressive defense that was intent on blitzing the heck out of him, his performance was outstanding.

Yes, there was a pick, and very nearly another on an ill-advised pass in the Tampa red zone. And the team was 2-9 on third down, but for all the reasons mentioned above, that Jones had the Patriots in a position to attempt a go-ahead field goal with less than a minute remaining was a testament to his coolness under fire. Rewatching the game on Monday, the 3rd and 3 pass that was tipped at the line had Jakobi Meyers wide open for a 1st down that would have moved the sticks and eaten up the remainder of the clock.

At one point, the rookie QB completed 19 passes in a row. He was in command of the offense and looks like a player with far more experience than 4 games. His sliding in the pocket (making Devin White, coming free, miss) was outstanding.

When the running game has less than zero production, Brandon Bolden and J.J. Taylor each carried one time for zero yards, and Damien Harris had four carries for -4 yards, it is not good. But look at the tape. There was nowhere to run, they were getting constantly hit in the backfield, so it is hard to point the finger at the backs for the absence of a running attack.

However, there were some whiffs in pass protection by Harris and the veteran Bolden. J.J. Taylor’s fumble cost the team points, it was a first down pass that he caught inside the 30-yard line. That one really stung. Bolden and Harris each had some decent moments pass receiving, which keeps the grade from total failure.

Jakobi Meyers is becoming invaluable to this team. Once again, he led the team in receiving with 8 catches for 70 yards, and to top it off he completed two passes for 45 yards, the second of which was a beauty of a dime to Nelson Agholor for 30 yards which put the Patriots in a position to score. 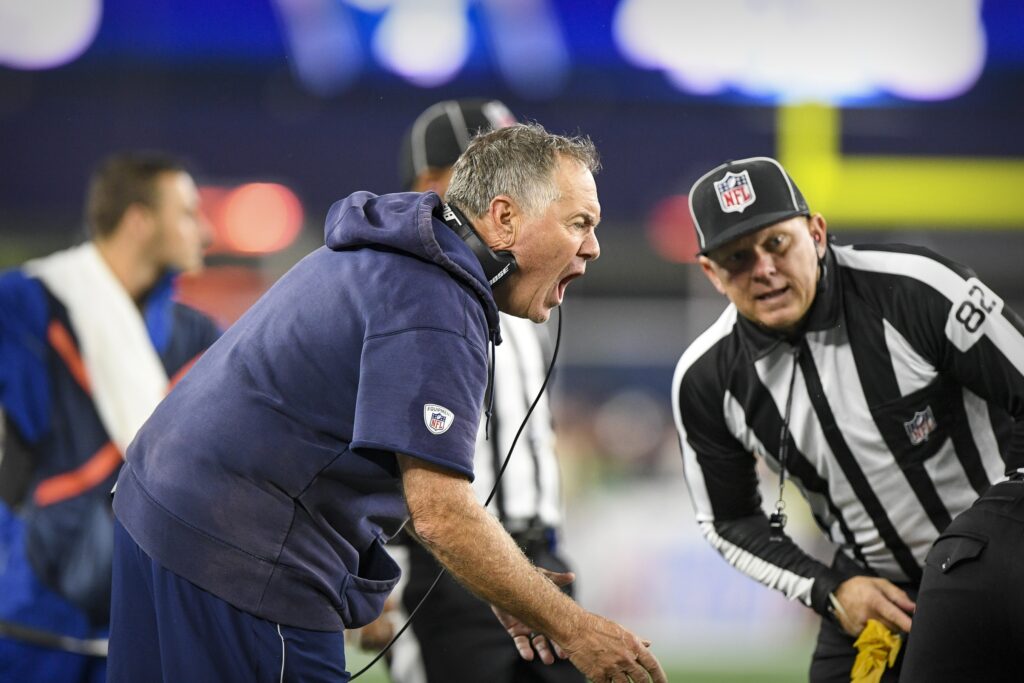 Bill Belichick reacts to a call by the officials. Brian Fluharty-USA TODAY Sports

Kendrick Bourne and Nelson Agholor are getting more and more in sync with Mac Jones. Bourne was targeted five times and had 5 catches for 58 yards. If Jones can ever get any consistent pass protection, these two will be able to start running deeper routes. Again, don’t blame them for other’s failures.

N’Keal Harry returned to the lineup for the first time in 2021 and drew a pass interference penalty and had 1 catch for 10 yards.

Jonnu Smith and Hunter Henry had only so-so production numbers-wise, 3-14 yards and 4 for 32 yards respectively but each had their first touchdowns as members of the Patriots, and both were …wait for it…in the red zone.

Smith recovered from a nightmarish game last week while Henry is rounding into form and finding more and more of a role in the passing game. He was wide open for what could have been another TD but Mac Jones didn’t see him.

The offensive line was awful once again. The non-existent running for the second week in a row falls on them. Are the Bucs’ front seven beasts against the run? Absolutely. But when a preseason Top 5 OL can’t generate a single yard of rushing, then something is badly amiss.

Pass protection? Nearly worse if that is possible. Tampa had three sacks coming in and their pass rush was a source of concern for them. Sunday night? Four sacks and 12 more QB hits. That is absolutely unacceptable.

And it isn’t just the right tackle, Justin Herron gave up four pressures, Isaiah Wynn three, David Andrews doesn’t snap the ball when the rest of the offense takes off, Michael Onwenu has two holding penalties on one series and is benched.

The run defense has been an issue this season (and last), but last night? No, it was by design. The Patriots went with a light package of six and seven DBs to take throwing lanes to Tom Brady. They were conceding the runs to Leonard Fournette, who was very good. But they still had some tough plays inside with Lawrence Guy and Deatrich Wise had big run stuffs.

Christian Barmore is improving every week and provided some good interior push upfront. And Wise had a key pass knocked down at the line.

The linebackers were led by Matthew Judon (who else?) once again. He’s been the Patriots’ best defensive player this season …and it isn’t even close. He had another sack, two QB hits, and five QB pressures. He also drew a hands to the face penalty that wiped out a huge Bucs completion. It did seem like he was held on every play. 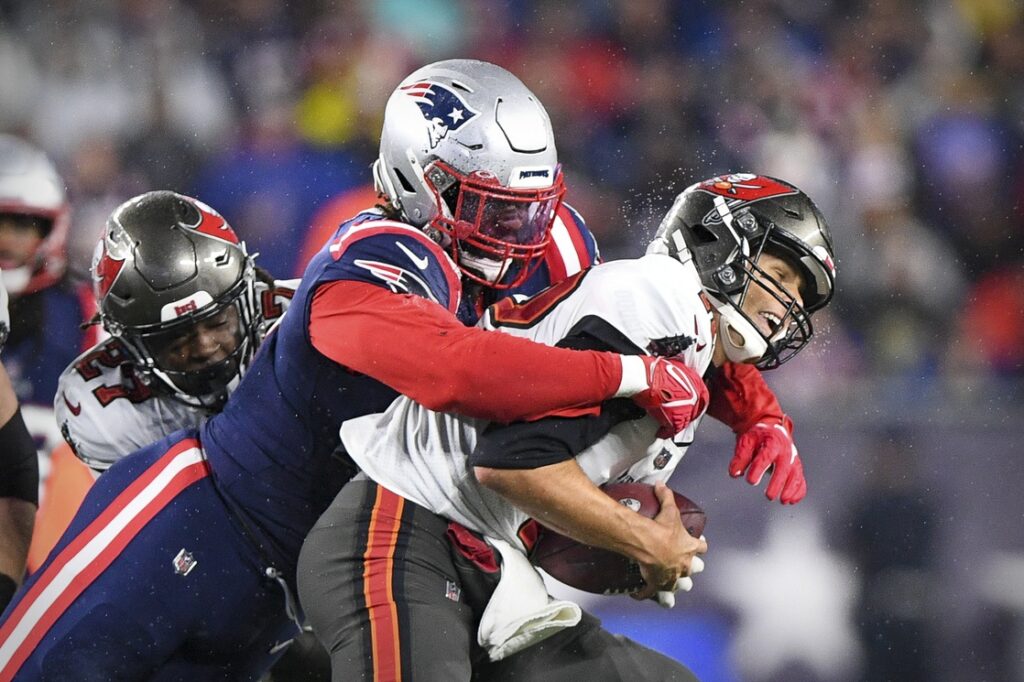 Matthew Judon with a sack of Tom Brady. Judon has been outstanding in the first month of the season. Brian Fluharty-USA TODAY Sports

Kyle Van Noy created some pressure but was isolated in coverage (not a good situation). Dont’a Hightower once again was not a factor. But Judon, who can rush the passer and set the edge in the running game elevated the crew.

The Patriots went with man coverage and competed all night long against the Bucs talented WR corps. They got their yards but they held the high-powered Tampa offense to just 1-4 in the red zone.

Tom Brady completed just 51 percent of his passes and had 0 TDs (22-43 for 269 yards, 6.3 yards per attempt, 70.8 QB rating). J.C. Jackson was going against Mike Evans and held his own. Jalen Mills did a good job of limiting Chris Godwin, while Jonathan Jones was matched up with Antonio Brown.

Stephon Gilmore is still a few weeks away from being able to be activated. Very good night for the secondary. Tremendous effort across the board.

The special teams’ units were showing some signs of playing like the talented group that we know they are and expect them to be. The coverage units picked it a notch. Justin Bethel and Chase Winovich stuffed a kick return at the 14-yard line. Justin Bethel downed a punt inside the 10-yard line. And then Matthew Slater looked like he generated a fumble…but upon further review…it was a deserved penalty on him that wiped it out.

There were other gaffes. Gunner Olszewski muffed a kick that the Patriots were lucky that nearly went out of bounds inside the 1-yard line. The return unit left a gunner uncovered and Olszewski had to rush to cover him, which resulted in the punt being unable to be returned.

The Patriots’ coaches definitely had the team ready (minus the OL) to play on Sunday night. Bill Belichick’s defensive game plan was a beauty and they hung with Tampa Bay and had the ball with a chance to win the game with under a minute to go. It’s a game of inches and sometimes they bounce your way and sometimes they don’t

We’re on to the Texans in Houston…

By: Robert Alvarez
Patriots Chairman and CEO Robert Kraft is honored by two organizations for his charitable and humanitarian work.
36 mins ago