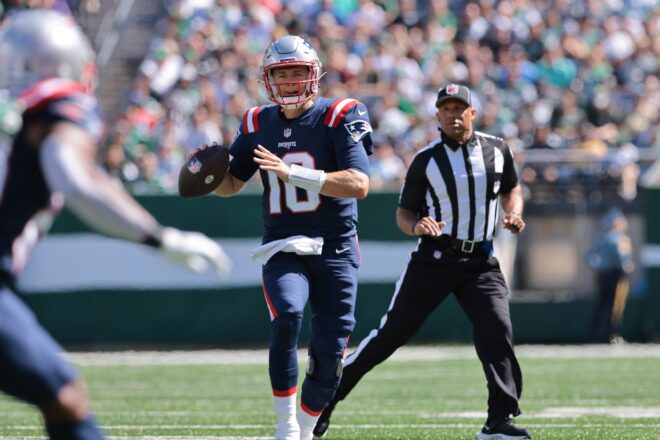 Some thoughts following Sunday’s 25-6 win over the Jets:

1) Rookie quarterback Mac Jones had another fairly solid outing against the Jets on Sunday, finishing the afternoon with another accurate outing after completing 73% of his passes.  He connected on 22-of-30 for 186-yards and, unlike his opponent, finished his second straight start without an interception.

However, Jones also walked away from this one without a touchdown pass, with the team struggling down in the red zone for the second straight week.  New England was just 1-of-3 down in scoring territory, with the coaching staff largely taking the ball out of Jones’ hands and instead relying on their running backs.  Both Damien Harris and James White each ran for touchdowns, with Harris’ coming on an impressive 26-yard run where he fought for every last yard before crossing the goal line.

Jones also made another tough decision late during the team’s final drive of the first half.  After he led them down to New York’s 21-yard line, the rookie found himself facing pressure and scrambled outside the pocket.  With nowhere to go, Jones tried to throw it away but instead threw the ball to the turf short of the line of scrimmage and was called for intentional grounding, which caused a loss of down and moved them back to their own 31.

Fortunately, kicker Nick Folk was on fire on Sunday and converted, hitting the 49-yard field goal to put New England up 13-3 at the half.  He finished a perfect 4-of-4 on Sunday, hitting on attempts of 46, 49, 32, and 26 yards respectively.

Jones didn’t have a great second half, finishing 5-of-9 for 44-yards but the running backs received the lion’s share of the play calls after they collectively rushed 12 times for 57-yards, including Kendrick Bourne running the football once for 16 yards.  But overall, he certainly finished with a better showing than Jets quarterback Zach Wilson, who threw 4 interceptions on the afternoon.  That ended up being the difference in the game, and it’s why Jones was able to get his team into the win column.

2) While there were times where it didn’t feel like it, New England’s defense was certainly much better than they were last week against Miami.

They made Wilson’s life miserable, putting him under pressure while blanketing New York’s receivers and forcing four interceptions.  Several of Wilson’s picks were deflections where Patriots defenders were able to come down with the turnover, with the rookie clearly baffled by the coverages.

J.C. Jackson picked off two passes on the afternoon, while Devin McCourty and Adrian Phillips also each finished with one.  Wilson’s miscues came largely when he tried to force the ball down the field instead of taking Jones’ lead and settling for what the defense gave him and they certainly made him pay.

By the second half, the boos were cascading down from the crowd who had hoped that the balance of power might have shifted their way with the addition of their first-round quarterback.  Instead, they sat there and watched the defense manhandle their guy while, on the other side, the Patriots had success with Jones.

For a team hoping to turn things around, Sunday was essentially business as usual for a Patriots team that extended their win streak over the Jets to 11 games, leaving the fans at MetLife Stadium frustrated and disappointed yet again by the time this one was over.

3) While it’s not an exciting position by any means, it’s tough not to appreciate how good punter Jake Bailey has been so far this season.

He had another terrific day punting the football, finishing with 5 kicks that saw four of them land inside the 20, which forced the Jets to have a long way to go nearly every time they touched the football.

His first one was big after New England’s opening drive stalled at the Jets 40-yard line following a sack on third down of Jones.  Bailey booted it down to New York’s 8-yard line, which was a high kick that former Patriots receiver Braxton Berrios had to fair catch.

Two plays later, facing pressure deep in his own territory, Wilson threw his first interception of the afternoon.

His ability to help change field position has quietly been one of the reasons why teams have had to work for every yard.  However, he had a rare miscue on Sunday after seeing one of his kickoffs go out of bounds, which gave the Jets the football at their own 40-yard line.

Thankfully, they didn’t take advantage as two plays later, Wilson threw an interception to Phillips and New England took it back 72-yards over the next six plays, with White finishing things off by running it in for a 7-yard touchdown.

With Jones still getting acclimated to the offense, it has to be good to know that if the drive stalls, someone like Bailey can come in and at least push the ball deep into opposing territory and make things a little easier on the defense.  But he’s hit some big punts so far already this season and he’s definitely been off to a nice start. 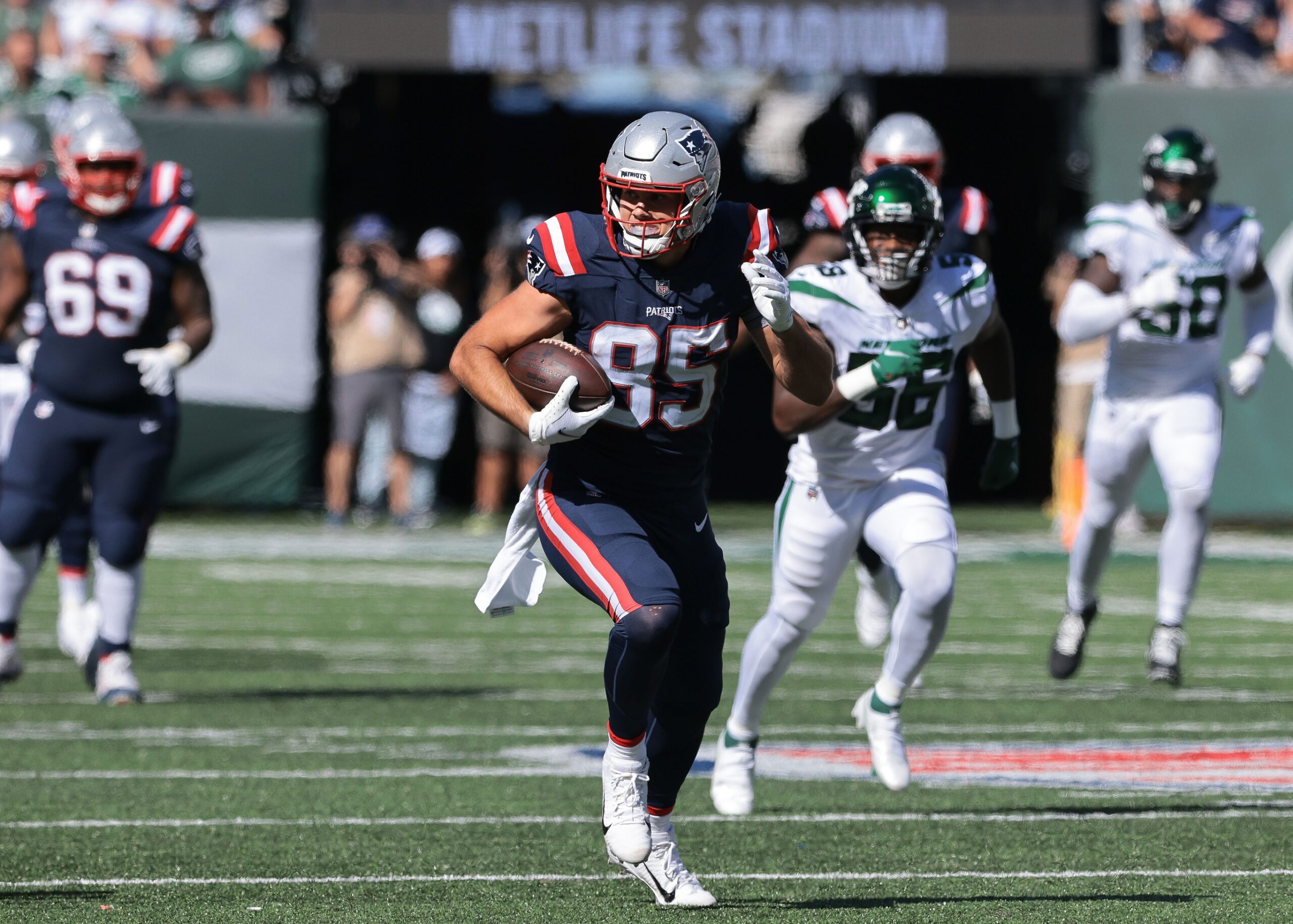 4) It was good to see newcomer Hunter Henry make some plays on Sunday, with the veteran tight end coming up with a key play late in the third quarter that helped get the drive going.

Henry caught a 32-yard pass from Jones to start things off that ended with a 32-yard field goal by Folk to put them up 22-3.  It was a terrific route by the tight end and a perfect strike by Jones, who hit him in stride and allowed him to make the play.

Despite playing most of last week’s game, Henry has been mostly a blocker to this point and hasn’t seen a lot of action in the passing game.  So it was good to see them get him involved and that play helped jumpstart the drive.  He also caught a 10-yard pass during the final two minutes of the first half, which helped New England get out to midfield before eventually driving down and kicking a field goal.

All in all, while it’s been a slow start for Henry in the passing game, he’s quietly been a key reason why they’ve been so effective running the football.  Hopefully, we’ll see him continue to get more involved and Sunday was a nice start for the former Los Angeles Charger.

5) Give Harris credit, following his fumble last week that cost the Patriots a chance at a win, he came back strong on Sunday.  He rushed for 62-yards on 16 carries (3.9 avg) and was impressive, with his 26-yard touchdown run going down as one of the more memorable plays so far this season.

Following Wilson’s interception early in the third quarter, New England found itself with the football at the Jets’ 35-yard line.  After completing a 9-yard pass to Nelson Agholor, which got the Patriots down to the 26, Jones handed the ball off to Harris, who initially was hit at the line of scrimmage but managed to run through the defender.

From there, another defender got him at the 19, but he slipped that tackle and kept going.  Another defender tried to get him again at the 14, but Harris slipped that one and ran behind Jakobi Meyers, who did a great job blocking his man out in front on the play.  Harris then slipped behind Meyers, who saw his man turn away from him to try and make a play at Harris, who managed to wrap him up.

Another Jets defender then came in and wrapped up the running back, with another joining the fray.  But Agholor, who had been blocking his own man nearby, ran over to help Harris start pushing forward, with Meyers joining him.

Then, out of nowhere, center David Andrews joined in, with Jones then surging in right after as the quarterback became the final piece that helped force the pile across the goal line.

It was a terrific play, and it extended the lead to 19-3 before Folk surprised everyone by missing the extra point.  But Harris has been a bright spot so far in 2021 and he fought hard on that carry and it was a terrific collective effort by everyone who helped him cross the goal line.

The win evens things up and puts New England at 1-1 on the season, which now has them tied with everyone in the AFC East but New York (0-2).  For a division where it seemed like their grasp on it might have been slipping away, the Patriots have suddenly found themselves right back in contention with a chance to get above .500 when the Saints visit Gillette Stadium next Sunday at 1:00pm.