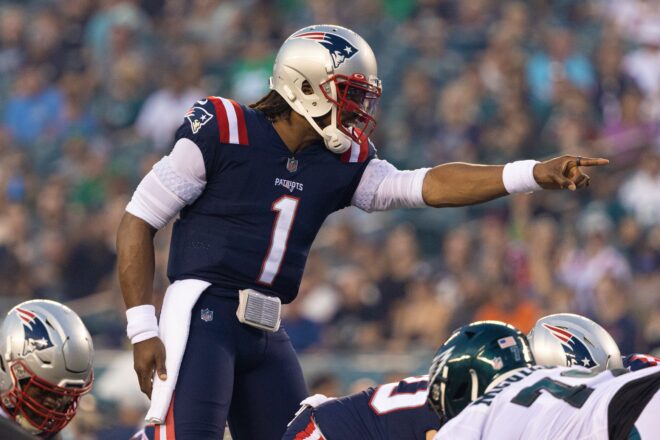 The Patriots have released QB Cam Newton and are going with Mac Jones as the starting QB against the Miami Dolphins.

Bill Belichick had said repeatedly this spring/summer that Newton was the team’s starting quarterback but that he had to reestablish that position, or someone would have to play better than him for the coaching staff to make a change. Apparently, that day has come.

Mac Jones had a very impressive training camp and preseason. Although Newton did get the first-team reps all through camp and started all three preseason games, Jones got the lion’s share of the reps during the games and was impressive, going 36-of-52 for 389 yards, with one touchdown and no interceptions, playing 107 snaps, while Newton, by comparison, played little completing 14-21 for 162 yards with a touchdown and an interception.

“I really appreciate all the love and support during this time but I must say please don’t feel sorry for me!! #i’mgood,” Newton wrote on his Instagram account earlier on Tuesday morning.

Many fans questioned why Belichick didn’t keep Newton as a backup to the rookie. The answer could be one of two scenarios. The first, (and the feeling here) is that Newton may have balked at being a backup and asked for his release. He obviously feels that he can still play and has $3.5 million in guaranteed cash coming his way that the Patriots are on the hook for. A team that wants to bring him on would only have to pay the league minimum.

However, another reason for his release could be that Newton is extremely popular in the locker room, and Belichick may feel that it would be more difficult for Jones to make the offense his own without having the presence of the former NFL Most Valuable Player behind him if he struggles. Veteran Brian Hoyer, who is (for now), the backup to Jones won’t have that kind of pull. Neither will Jarrett Stidham when he is eligible to come off of PUP later in the season.

Belichick is well aware of how rookies QBs can be exploited, he’s the best at doing just that. But he must feel that Jones will be able to weather the storm. Brian Flores, the former Patriots defensive coordinator who is now the head coach of the Miami Dolphins who the Patriots will face on Week 1, was Belichick-ian in his reaction.

“If he’s earned the respect of Bill Belichick and Josh McDaniels, then he has my respect,” Flores said to the media on Tuesday morning. “ He was a very good college player. Did a lot of great things there. … We’ll have our hands full with him and the whole team.”

That means, he’s going to throw the kitchen sink at him on Week 1.

In other news, Patriots cornerback Stephon Gilmore will open the 2021 NFL season on the reserve PUP (physically unable to perform) list, meaning he will miss at least the first six weeks of the season. Which is a big blow to the secondary.

Gilmore has been recovering from a torn quad suffered in Week 15 of last season. The injury required surgery. Due to the displeasure, he’s had with his contract situation and the fact he sat out of the mandatory minicamp, many assumed his absence was due to the contract and not his injury.

Gilmore will miss the first six weeks of practice/games and then the team has five weeks for Gilmore to begin practicing. Then the team has three weeks to decide on whether to activate Gilmore or place him on season-ending IR.

Now the trade for Shaun Wade makes more sense, the team obviously felt that Gilmore wasn’t going to be ready to go Week 1. Barring any further moves, the team will go with J.C. Jackson and either Wade or Jalen Mills at the #2 corner, with Jonathan Jones in the slot.