5 months ago at 5:00 am ET
Follow @IanLogue
Posted Under: 2021 Patriots Preseason 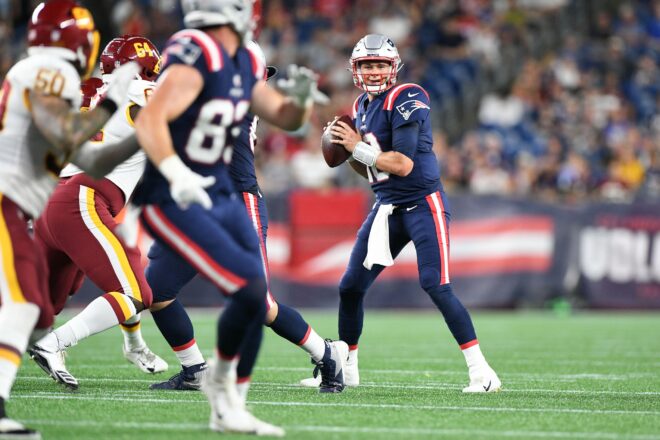 Some thoughts coming off of Thursday night’s 22-13 win over Washington:

1) Mac Jones has obviously been the talk of training camp and Thursday night’s debut will likely only increase the chatter following what was a relatively solid, albeit not necessarily spectacular, performance.

Jones took over the offense late in the first quarter, receiving a standing ovation as fans definitely gave him a warm welcome.  Jones rewarded that gesture by moving the offense with relative precision, although the first throw of the night was certainly interesting.

Undaunted, Jones came right back and fired a perfect strike to Kristian Wilkerson, who hauled in the perfectly thrown pass for 7-yards and a first down.  Jones then followed that up with a nice throw to Kendrick Bourne for 13-yards, before handing off twice to Sony Michel which moved them deeper into Washington territory to the 34-yard line.

However, he missed on what could have been the play of the night, throwing a terrific 34-yard bomb to Wilkerson up the left sideline that glanced off his fingertips as he was relatively well defended.

Three plays later, Quinn Nordin came out and hit a 50-yard field goal to finish the drive and the fans in Gillette Stadium were definitely pleased with what they saw.

He played the entire first half but the more interesting look at the rookie came early in the 3rd quarter when they opened with the no-huddle, to which Jones marched them down during a 13-play, 53-yard drive for what ended up being a 40-yard field goal by Nordin to extend their lead at 9-7.  Clearly, the coaching staff wanted to get a look at exactly how much the former Alabama standout could handle and for the most part, he delivered.

The fact he came out and had long sustained drives is really what stood out, which considering this was his first showing in a relatively meaningless preseason game, it was a solid first start.

Overall, the rookie finished the night completing 14-of-19 passing (74%) for 87-yards.  Not perfect, but it was certainly the type of first impression that fans were hoping to see from this year’s first-round pick.  For now, he certainly looked about like what we’ve been hearing and it should be fun to see his progress in the coming weeks.

2) As good as Jones looked, one storyline that sort of stands out is the fact that he’s got a lot of the intangibles to overtake Cam Newton as the starter, but he still didn’t quite do enough to create significant separation.

Newton’s first possession saw him get a visit from Washington’s Chase Young on a 3rd-and-8, with Young blowing past Isaiah Wynn and putting a hit on Newton that initially saw the ball came out before officials ruled it an incompletion.  That one came on a 3rd down play, while the next drive saw an 11-yard run by Damien Harris get negated by an offensive holding call on Jonnu Smith.  That essentially killed that drive, despite the fact Newton had them moving down the field and had made a couple of nice throws on that drive.

The veteran quarterback definitely showed some nice things Thursday night, finishing the first half with eerily similar totals with Jones:

So again, a terrific first impression by Jones, but as he’s done through camp, Newton also did enough things to keep it somewhat even.  Whether or not that continues will be interesting to watch, but credit Newton for coming out and playing relatively well after what was obviously an inconsistent 2020 campaign.  However, how things unfold in the coming weeks might tell us more about how the coaches are really looking at this and Thursday night was definitely eye-opening to say the least.

3) Kicker Quinn Nordin had a terrific night in his debut for New England, hitting all three of his field-goal attempts on the evening as he moved one step closer to potentially overtaking kicker Nick Folk in that position battle.

All of Nordin’s field goal attempts sailed right down the middle, including a huge 50-yarder he hit to finish off Jones’ first offensive series that looked like it would have been good by another 10-yards.

However, he walked away from Thursday night having pushed one of his extra-point attempts wide, which likely will give Belichick enough ammunition to keep him grounded for the time being.

But all-in-all, not a bad night for the former Michigan Wolverine, who definitely took one step closer to potentially being on the roster in September.

Matthew Judon: He’s an athletic player who was all over the field.  He made some nice plays but had a scary moment in this one where he took a hit to what appeared to be his knee and he immediately came over to the sideline.

After going into the medical tent, he emerged and went straight back over to the defense and then later re-entered the game.  He’s such a terrific player and it seems like he dodged a bullet Thursday night.  But he was disruptive and appears to be a physical presence that opposing teams are going to have a difficult time with.

Ronnie Perkins: He made his presence known on a few occasions Thursday night.  He finished second on the club in tackles with 5 and also had a tackle on special teams.

Ja’Whaun Bentley: He finished the night with one of the two sacks made by the defense and he was also disruptive, as well as making a tackle for a loss.

Ja’Whaun Bentley: He had a fairly good night, including one key thrid down play where he forced an errant pass by Tyler Heinicke that led to a punt.

Nick Thurman: Finished the night with four tackles but he made a big play that dropped running back Jonathan Williams for a loss to set up a long third down that ultimately led to a Washington punt.

Kristian Wilkerson: Despite not hauling in Jones’ deep ball, he had a pretty good night.  He led all receivers with 6 receptions on 9 targets and is surprisingly quick, looking about as good as he’s been advertised in camp.

Rhamondre Stevenson: He runs hard and showed some impressive acceleration on his final run of the night, breaking away from defenders during his 91-yard touchdown run.  That one was fairly funny because it shouldn’t have even happened.  Brian Hoyer kneeled down twice to run out the clock and end the game, yet Washington coach Ron Rivera called two timeouts.  So the Patriots opted to run the football and they made Rivera pay, with Stevenson delivering the knockout blow with an absolutely terrific run.

This is an incredibly deep group and Stevenson can walk away from this one feeling confident that he made a solid impression after his performance Thursday night.

James White: Made a terrific catch-and-run and looked about as explosive as we’ve seen in a while.  Definitely looks like he might be gearing up for a bounce-back year after both a tragic and difficult year for him in 2020.

Kendrick Bourne:  He looked quick and played fairly well in what little we saw of him.  His 13-yard reception from Jones to start the second quarter after the refs call on Meyers’ would-be catch was big as it helped jumpstart the offense and played a key role in that drive getting started.

Jonnu Smith: He had a big catch and run early in the game that if that’s a sign of what’s to come, Patriots fans should be excited to see what he’s going to do in this offense.

The Patriots will be in Philadelphia for the club’s next preseason match-up, which is scheduled for next Thursday night at 7:30pm ET.

Nice writeup son in law! You hit the highlights and nailed it on Mac Jones!