1 year ago at 10:55 am ET
Follow @IanLogue
Posted Under: Patriots News

1) The 2021 New England Patriots schedule was released on Wednesday night, filling in the gaps from yesterday’s news where we found out they’d start the season off at home against Miami.

They actually will start the year playing 2 of their first 3 games at home, with the Patriots going on the road in Week 2 to battle the Jets, before returning home for two games against the Saints and then a Week 4 match-up that will feature Tom Brady’s return to Foxboro on October 3rd.  That one will be a nationally televised game on Sunday Night Football, which will obviously be a big one for the networks and should definitely draw significant ratings.

Following that game, they hit the road and play Houston, followed by two home games against the Cowboys and Jets.

From there, the middle of the season is a little tough.  After starting the year playing 5 of their first 7 games at home, the reverse now comes into effect as Week 8 through Week 15 will see the Patriots play 5 of those 7 games on the road, with 4 out of 6 of those games coming before the Bye week in Week 14.

After that, they play two games at home against the Bills and Jaguars and will close out the season with a trip to Miami on January 9th.

Overall, it’s not easy by any stretch but there’s definitely an opportunity for them to be competitive this season.  The biggest question is probably going to be how well they can start off because the mid-point of the year will likely be a little challenging.  But now that we know how the season is mapped out, it should be fun to see how this year’s group fares after a tough 2020 campaign.

2) Speaking of which, if you didn’t see it, NBC Sports Boston posted a simulation yesterday pondering how this season would play out with Mac Jones as the starter compared to Cam Newton and the results were, let’s just say, interesting.

The test was conducted in partnership with Strat-O-Matic, with both scenarios being simulated and the rookie didn’t fare quite as well as Newton.

Overall, Jones threw for a few more yards than Newton, with the former Alabama standout throwing for 3,665 yards compared to 3,654 by Newton.  However, they had Jones throwing for more touchdowns (26) compared to Newton (21), but the edge went to Newton in turnovers as they had him throwing just 12 interceptions, compared to 19 by Jones.  That essentially gave Newton the edge in wins, with the veteran finishing 10-7 while Jones finished 9-8.

That one game differential ended up being the difference-maker, as the Patriots made the playoffs with a Wild Card berth with Newton but missed the postseason with Jones due to a tiebreaker.

The one interesting note was the fact that the Week 4 match-up against Brady was at least more competitive with Jones at quarterback, while the Patriots ended up on the wrong side of a 23-9 blowout with Newton at QB.  With the rookie, they still lost, but the final result was 27-26.

It’s tough to say how they came to these results but it’s definitely interesting.  However, barring Jones lighting things up in camp and both Newton and Stidham looking absolutely horrible during that span, it will likely be a while before Bill Belichick even considers putting his young QB under center.

3) It’s funny to see the difference with Brady when it comes to how much more he’s shown his personality with the Buccaneers.  He obviously seems to have more freedom when it comes to expressing his real thoughts on social media down in Tampa, compared to New England where aside from his Monday radio appearances on WEEI and his press conferences, we really didn’t hear much from him while he was here.

But down there, he’s definitely been having a little more fun from that standpoint.  After the schedule was released on Wednesday, the Buccaneers were revealed to be starting the season at home against the Cowboys.  Brady took to Instagram and took a playful jab at Dallas, writing, “9/9 CAN’T COME SOON ENOUGH.  EXCITED TO OPEN UP AGAINST ‘AMERICA’S TEAM'” while including a sarcastic wink-face emoji after it.

Tom Brady poking fun at the Dallas Cowboys on his Instagram. pic.twitter.com/kDAU9gHtlz

When the full schedule was revealed later Wednesday night, we learned that his return to Gillette Stadium will happen on October 3rd when the Buccaneers travel to Foxboro for a Week 4 match-up.

Brady then posted this:

Back to where it all started.

That game is already garnering significant money on the secondary ticket market, with StubHub showing some fairly outrageous prices for that match-up: 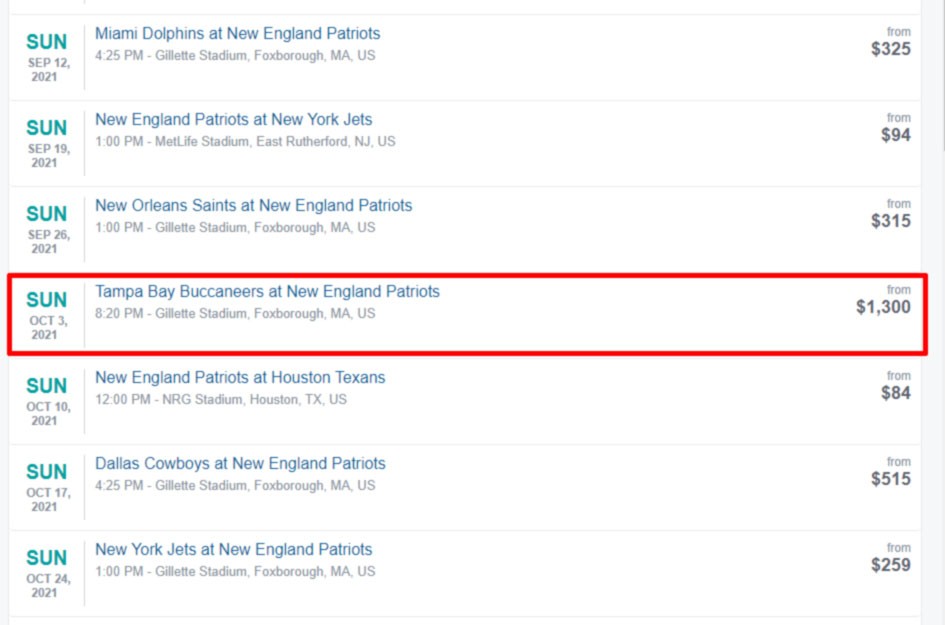 The contest should be Brady’s last-ever game at Gillette Stadium and it’s clearly going to be expensive for anyone looking to attend.

But it’s just interesting to see Brady, who many teammates have always talked him about being a fun and sarcastic guy, expressing himself a little more off the field.  He never had much of a chance to connect more with the fans during his tenure here, instead rubbing some fans the wrong way as his later forray into social media was initially more business related.  Down there, it’s definitely been a different story and the reaction with Buccaneers fans has been siginicantly different.  Then again, it’s obviously not hard to figure out why they’re enjoying it given how their previous season just finished.

4) There’s been a lot of talk recently about the fact Tim Tebow was given a tryout at tight end for the Jaguars and then subsequently the news came out that he’ll potentially be signing there, which has quite a few people questioning the fairness given the situation with Colin Kaepernick.

Former Patriots linebacker Brandon Spikes attempted to shut down that discussion a couple of days ago, with Spikes pointing out that Tebow won a National Championship for then Florida coach Urban Meyer, who is now the head coach in Jacksonville.

Spikes went off on Twitter and he can’t quite understand why there’s so much confusion as to how this all unfolded, citing their relationship and Meyer’s knowledge of Tebow’s work ethic as the real motivating factors behind the decision.

His college coach is now the head coach of the only team to give him a tryout. His coach knows he is a hard working and team oriented athlete that would be happy to play a role. Why are y’all still confused?!?

The fact Spikes has come to his defense is good to see, although his name is a reminder of odd circumstances in how things turned out in New England for him as a player.

He played well for the club in his first stint after New England drafted him in the second round back in 2010.  However, he suffered a knee injury at the end of his final season in 2013 and wasn’t re-signed.  Instead, he played in Buffalo the following year and played well enough for the Patriots to bring him back in 2015.

But instead, it never came to be after Spikes was involved in a bizarre hit-and-run where he left the scene after claiming he thought he hit a deer on the highway.  Instead, he rear-ended a couple on a stretch of highway in Foxboro and then abandoned his car on the median.

Once the club learned of the incident, the Patriots subsequently cut him and he later pleaded guilty in court and was sentenced to probation and lost his license for a year.

Meanwhile, Spikes has come a long way since that incident 6-years ago.  He’s been spending time with his family away from the game while not having officially retired, and was honored last August after joining Tebow and other former teammates in being inducted into the University of Florida Hall of Fame.

5) The Packers seem to potentially be preparing for life after Aaron Rodgers, with Green Bay surprising everyone with the signing of free-agent QB, Blake Bortles on Wednesday.

The Packers are downplaying the signing, claiming they needed three QBs heading into OTAs with just Rodgers and Jordan Love on the roster, but that’s obviously not the case.  The more likely scenario is they could be adding Bortles in the event Rodgers opts to skip them, which would have left them with just Love to run the drills.

Either way, that situation is likely far from being resolved and the whispers about him landing in Denver have continued.  Whether or not a move comes to fruition remains to be seen but it appears the Packers have at least made one move to try and cover themselves for the immediate future until they figure it out.

Should Rodgers eventually be dealt, Bortles also gives them another experienced QB on the roster until they’re able to decide who will step into that role.

For anyone who remembers Bortles career in Jacksonville, let’s just say Packers fans are likely not too excited about this one.

By: Robert Alvarez
Check out the Patriots mini-documentary highlighting Richard Seymour's football journey to becoming a Hall of Fame player.
1 day ago
wpDiscuz