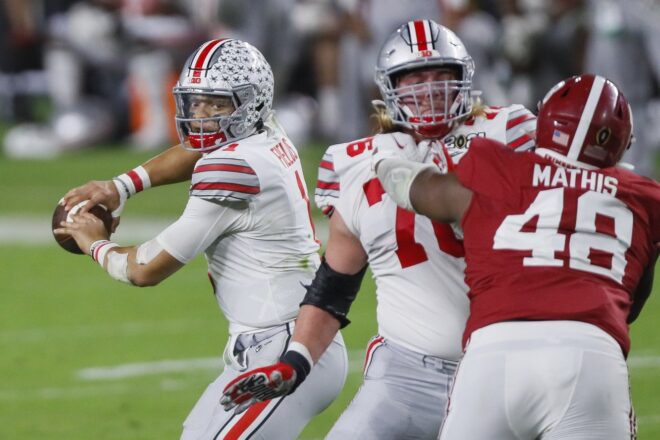 We’re on to Tuesday and here are today’s top stories:

1) Speculation will be rampant this week and it’s already started out that way as people try and figure out exactly what Bill Belichick and company may do heading into this weekend’s NFL Draft.

All eyes are clearly on what the Patriots will do to address their quarterback situation, part of which is out of their control unless Belichick decides to take drastic measures primarily due to who is ahead of them.

We know who Jacksonville and the Jets are taking, with the 49ers as the lone mystery.  The latest signs seem to point to them taking Mac Jones or Trey Lance, which will likely have a ripple effect down the board as New England makes a decision.

The next question will be whether Belichick will make the move up the board, which some experts are starting to believe might happen.  ESPN’s Mel Kiper Jr. falls into that category, with Kiper Jr. believing that should Justin Fields be within their grasp, a trade up to the #7 spot may make the most sense.  That would require a deal with the Lions, who may be looking to trade back as they try and bolster their roster with new QB Jared Goff now in the fold.

A move like that will obviously depend on how enamored Belichick and Josh McDaniels are with Fields, who is rumored to be among the quarterbacks they’re favoring.  But if they really like him, their approach this offseason has already been to go aggressively after it.  One would have to believe Belichick won’t pick the draft to all of a sudden take a more reserved approach.

“What they need to do is go up and get Justin Fields,” he said via WEEI.com. “If he’s there at 7, the Detroit Lions could be a team looking to move (down). If I’m New England, I’m not sitting at 15; no quarterback is falling in your lap. You’re not going to be that lucky or that fortunate. You’ve got to go get them. I’m going to be very surprised if they weren’t aggressive on draft day, Thursday, and go get that quarterback.

The Patriots have already reportedly been exploring what it might take to move up into the top 10, so Kiper may be right.  The only question now might be who will be there and what they might have to give up to get it done.  But Belichick has to know he’s got a good thing going and to come away with a potential QB of the future would certainly cap off what has already been a pretty impressive offseason.

2) Meanwhile, out in San Francisco, Jimmy Garoppolo’s time with the team was a topic of discussion again on Tuesday night, largely thanks to some bizarre comments by head coach Kyle Shanahan.

When asked whether or not he could guarantee if Garoppolo would be on the roster Sunday, Shanahan replied, “I can’t guarantee that anybody in the world will be alive Sunday.”

I can appreciate Shanahan’s need to try and sound as clever as Belichick, but Bill has moments like that down to an art, while that comment by Shanahan just left people shaking their heads.

GM John Lynch cleared things up a bit by saying that the club has been in contact with Garoppolo, who has been on hand for meetings and things have apparently been business as usual.

“Jimmy’s been a pro,” said Lynch via NFL Network reporter Tom Pelissero. “I just spoke to him over the weekend. He’s here, he’s taking part in our virtual meetings, planning on being at the workouts and Jimmy’s been completely professional.”

Obviously, the 49ers have had a frustrating few years with their QB, who has been injured far more than he’s been healthy.  They’ve seemingly got Garoppolo right where they want him, with plenty to prove and potentially nowhere left to go if things go south after this season.  The one man who would welcome him back with open arms is coming off of a 7-9 season and has spent the last two months preparing to move on after it was reported Garoppolo was the Patriots “Plan A” this offseason.   The train has to move forward and it could leave Garoppolo one step closer to becoming the NFL’s next forgotten journeyman quarterback.

Whether or not Shanahan will move him would certainly alter New England’s plans, but time is definitely running out on this scenario.  The Patriots are the only team who values Garoppolo this high, but Belichick likely won’t surrender anything more than the same 2nd-round pick he acquired when he dealt him.

As a result, the two have probably already had this discussion and we’ll see who walks away as the winner.  But this story is likely coming closer to reaching the end and it’s safe to say most people in New England will be glad when it’s over.

3) One of the more interesting predictions I’ve seen so far heading into this weekend comes from NBC Sports Bay Area reporter Josh Shrock, who gave his Five Bold Predictions on the 2021 draft.

One of his predictions could cause the Patriots problems as he believes both the Raiders and Bears will catapult themselves into the mix and leapfrog Denver for the final two available quarterbacks.

With the 49ers taking Mac Jones, Trey Lance and Justin Fields slide past four, five and six where two teams are more than happy to make a move up the board.

With the Broncos sitting at No. 9, Jon Gruden gets on the phone to the Lions’ new front office and sends the No. 17 picks, along with a 2022 and 2023 first-round pick to the Lions to move up to draft Fields. Facing Patrick Mahomes twice a season, Gruden has seen the benefits of having a quarterback who can make off-script plays and had to take a chance on a big move to improve the trajectory of the franchise. This also makes Derek Carr and Marcus Mariota available via trade as the Raiders look to recoup some draft capital.

Meanwhile in Chicago, Ryan Pace and Matt Nagy’s jobs are on the line and they can’t entrust their future to Andy Dalton. The Bears, in desperation mode, send three first-round picks to Carolina to go get Lance, leaving the Broncos empty-handed.

With the five quarterbacks off the board, the Broncos then trade back to No. 12, as the Eagles come back up to secure Jaylen Waddle and get Jalen Hurts a true top weapon.

From there, he has the Patriots sending off their second-round pick to the 49ers along with Cam Newton for Jimmy Garoppolo.

For the 49ers, that gives them a more capable veteran to join their QB room in place of Garoppolo, while allowing both New England and San Francisco to get back on the right track and start a new era.

Definitely a couple of crazy scenarios, but entertaining nonetheless.  However, some of the most bizarre things occasionally come to pass, but should any of it play out, let’s hope the Patriots come away on the right side of at least some of it. 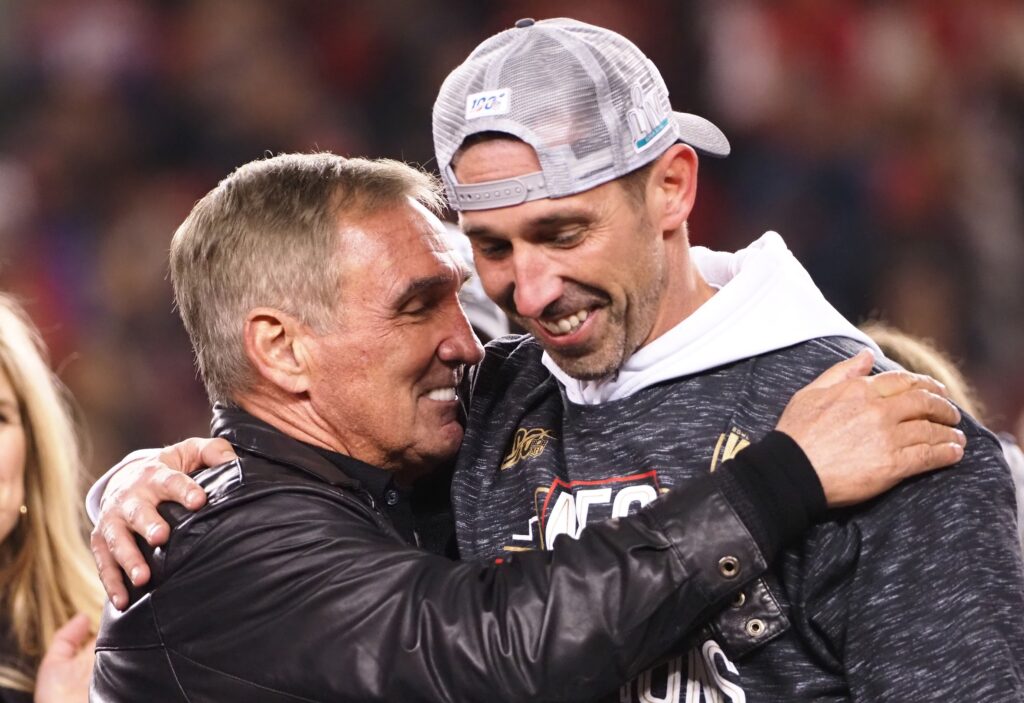 Mike Shanahan knows what his son is going through

4) With all this discussion of first-round quarterbacks, I came across an interesting chart on PrideOfDetroit.com where Mike Payton took a look at how things have worked out for teams who rebuilt around a marquee QB taken in round one and the results aren’t exactly promising.

Payton went all the way back through the quarterbacks taken in round one going back to 2010 and every quarterback beginning from 2016 going back to that year is no longer with their respective team.

For anyone keeping score, that’s 19-of-19 players taken in the first round who are either out of the league or sitting on someone else’s roster.  Quite a few of those mistakes have also resulted in many of the GMs who were in charge wt the time those guys were taken were also since fired at some point.

Overall, Payton notes that out of the 30 first-round QBs taken from 2010 to 2019, only seven remain with the team that drafted them.  That’s a staggering total, although after having also looked at that situation recently, it’s worth noting that even as bad as round one has been (if you look at this link), few players taken later on end up developing into significant players.

It just goes to show you how tough it is to get it right.  It’s going to be interesting a few years from now to look back and see how many of these guys who we’re all salivating over end up being on teams looking for their replacements.  History has already proven that this is how it will likely play out, which is why it’s so key for Belichick to do his best to hopefully draft one that pans out.

Belichick had the benefit of someone like Tom Brady, who defied the odds and played for 20-years and continued to do so at a high level.  Look at a coach like Mike Shanahan, who had John Elway for a handful of seasons in Denver but then never got back on top.  He cycled through guys like Brian Griese and Jake Plummer, before ending up in possession of a high-round pick at the top of the draft to try and get his team back on track.  Instead, he wasted it on Jay Cutler, who essentially was the reason Shanahan ended up cast aside by the team he helped build back up.  Now he’s out of the league and spending this offseason trying to keep the same thing from happening to his son.

Don’t get me wrong, Belichick is a better coach but the parallel is there.  Belichick is currently right there with everyone else trying to find a new leader who can get him back into the mix.  You can provide all the knowledge in the world but you still need a player who can execute those plans under pressure.

That’s what makes this so tough, and also one of the things that will make this weekend so important.

5) It appears when fans see Josh Uche on the field this season, they’ll need to look for a new number.

Uche announced the move on his Instagram page, posting a photo of the number #55 with his name next to it with the words “New Era” underneath.

Last year’s second-round selection played in 9 games as a rookie and he hands back the #53 to newcomer Kyle Van Noy, who previously wore that number during his previous tenure with the team.

A foot injury during his rookie season limited what started out as a promising season, but a recent workout video shows that Uche appears to be recovering well heading into this season, which is certainly good news.

Needless to say, keep an eye on #55 this season.  Uche appears ready to pick up where he left off, which should be good news for a Patriots team that will certainly benefit if he does.