2 years ago at 10:50 am ET
Follow @IanLogue
Posted Under: Patriots News 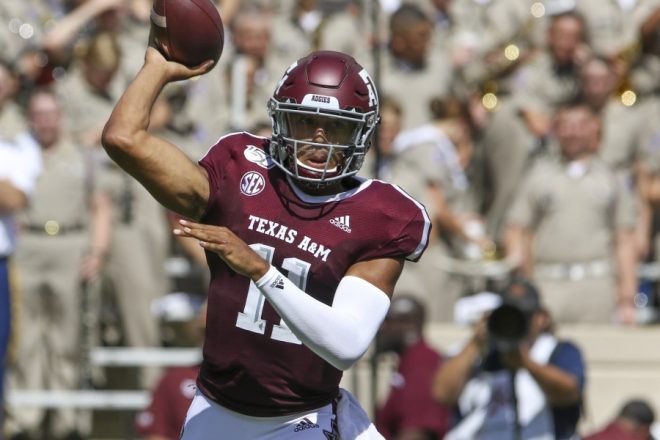 Good morning, and here are some Patriots news and notes for this Monday:

1) With the draft finally on deck for this week, we’ll hopefully soon have a better understanding of the Patriots quarterback situation heading into 2021, although it remains to be seen how things will play out.

Mark Daniels of the Providence Journal did his latest Mock Draft on Sunday and he had Texas A&M’s Kellen Mond being taken by New England with the 46th overall pick in the second round, but also had the club take a chance on Arkansas QB Feleipe Franks in Round 6 with the 197th overall selection.

Franks is an interesting player.  For anyone who follows college football, he initially was recruited by the Gators out of Wakulla high school in Crawfordville Florida but got off to a slow start.  He threw just 9 touchdowns with 8 interceptions in his freshman season as Florida went 4-7 that season.

However, the following year he turned things around.  He threw for 24 touchdowns and 6 interceptions and seemed like he had taken a terrific step forward.  But in 2019, he suffered a gruesome injury in the third game of the season where he dislocated and broke his ankle.

That, unfortunately, ended his career in Florida as Kyle Trask took over the starting role and the Gators went in a different direction.  Franks transferred to Arkansas where he threw 17 touchdowns and 4 interceptions but, more importantly, he completed 68.5% of his passes last season.

Daniels believes the Patriots “should think about double-dipping at quarterback” and he thinks Franks would give them another athletic player with “a cannon for an arm” to bring into training camp.

Taking it one step further, here’s another caveat to that pick.  If Franks doesn’t pan out, Senior Bowl executive director Jim Nagy suggested that he could potentially be useful elsewhere.

“It wouldn’t be a slot receiver, it would be more of a tight end projection, and that would be Arkansas’ Feleipe Franks,” Nagy said via HawgSports.com. “Now, Feleipe’s got all the tools. He’s one of the most intriguing quarterback prospects in this draft just because of the arm talent and all the game experience in the SEC. I think any team that drafts Feleipe is going to be committed to a long-term, 2-to-3-year plan with him. But if it’s just not working out over that span, I could see some time being open-minded enough to using Feleipe as a tight end.

“He’s 6-6. He’s got an 82-inch wingspan. He ran in the high 4-5s at his pro day. So very similar to a guy like Logan Thomas of the Washington Football Team. We saw what he did this year — 72 catches, six touchdowns. So Feleipe’s got very similar physical tools to a Logan Thomas. So, again, I think Feleipe’s a quarterback. But if two or three years down the road, it’s not working out, I could see that change being made.”

We all know Bill Belichick loves versatility, so it makes Franks an interesting prospect.

As for Mond, his selection by Daniels is also another one that makes sense, as the Patriots reportedly met with him at the Senior Bowl and Josh McDaniels has also even been exchanging texts with him this offseason.  Obviously, he doesn’t appear to be New England’s first choice but there are plenty of positive reports on Texas A&M standout and one would have to believe that being a day two pick might also be a motivating factor.

We’ll have to wait and see how it all unfolds but loading up on more than one signal-caller certainly makes sense.  Although, there are still reports that believe Jimmy Garoppolo could get released and may become available depending on how things play out in San Francisco, which could also come into play.

As a result, expect a crazy week.  It should definitely be an interesting and hopefully, productive one. 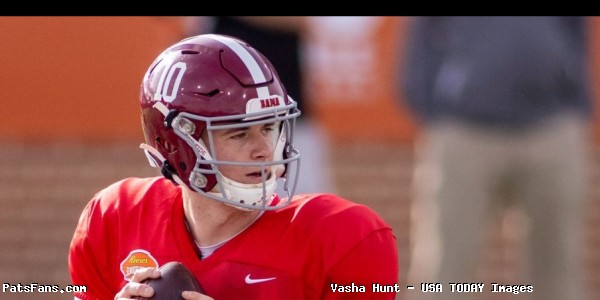 Mac Jones looks to be out of play for the Patriots.

2) Speaking of the 49ers, Michael Silver started a thread on Friday looking at their situation and he believes that Mac Jones will, in fact, be the pick Kyle Shanahan makes when they’re finally on the clock this week.

Considering that Jones was a player who many thought would go later in the round, the fact he’s shot up the board so high has been a curious development.

He caught a lot of attention at the Senior Bowl and his stock has been rising ever since.  But the interesting thing about all this is the fact that it really wasn’t long after news started coming out about New England’s potential interest in Jones that the 49ers shot up the board to #3 and seemed to lock in on him.

That trade was a massive gamble by Shanahan’s club, which has their entire future riding on whoever they ultimately take this week.  According to Silver, the idea behind the trade was that it put them in a firm position to have access to whatever player they wanted after the Jaguars and Jets, which Silver noted gave Shanahan and GM John Lynch the ability to relax and be thorough before making their final decision.

ESPN reports that part of their scouting has also included help from Kyle’s father and former NFL coach, Mike Shanahan, who has reportedly been involved with the process to try and help his son make sure they get this one right.

While Silver hasn’t spoken to them directly, he’s “had some conversations with people who know things” and believes that unless they’ve seen something from either Justin Fields or Trey Lance that would sway them away from Jones, the Alabama signal-caller seems likely to be heading to the Bay Area.  Ian Rapoport also reported that it’s between Jones and Lance, which means that Fields may be the odd man out at #3 and that it’s now between the two remaining players.

The pressure is now on for Shanahan and his father probably said it best in the ESPN piece.

“The line in the NFL is this thin,” Shanahan said, holding together two fingers.

3) Meanwhile, one other cool note over the weekend was the fact that Belichick received a unique honor in his hometown.

Belichick was on hand for the Men’s Lacrosse game between Army and Navy on Saturday and was honored at halftime and was given the key to the city of Annapolis.

What was really great was that, according to the Baltimore Sun, Belichick was all smiles as he was joined by former teammates and classmates during the ceremony, with the normally reserved head coach giving each one a big hug as they came on to greet him.

Honored to host Coach Bill Belichick at today's Army-Navy Men's Lacrosse game as he receives the key to the city of Annapolis!#GoNavy pic.twitter.com/8zKwd1luwT

A video tribute of Belichick was also played that included a message from Navy football coach Ken Niumatalolo as well as from Patriots long-snapper Joe Cardona.

“It’s an incredible honor to be recognized by your hometown. There’s nothing bigger than that. I’m so proud to be an Annapolitan,” Belichick said via the newspaper.

Overall, it was a terrific afternoon for Belichick, who was clearly overwhelmed with emotion as he received the honor.  But he was obviously surprised to be reunited with guys he said he hasn’t seen since his playing days, which really made it special.

4) For anyone who missed it, Rob Gronkowski pulled off a pretty impressive feat over the weekend.

The former Patriots tight end was on hand as he joined former teammate Tedy Bruschi at their alma-mater this weekend.  But Gronk made his way into the record books by catching a football dropped from 620 feet in the air, putting him in the Guinness Book of World Records.  The previous record was 563 feet, which was accomplished by Dude Perfect.

It took Gronkowski a couple of attempts to get his bearings but he caught the third attempt, tracking it all the way down in the bright Arizona sun before finishing it off with one of his Gronk spikes.

Rob Gronkowski and Tedy Bruschi are the honorary head coaches for the University of Arizona’s spring game. But before the game, Gronk set a world world record because…he’s Gronk. pic.twitter.com/RuSCZPUFQU

One person on Twitter noted that the fastest football thrown in the NFL is 60mph, while doing the math, the ball Gronk caught was likely traveling at 133.52 mph when it reached him from that height.

Needless to say, it was a pretty terrific accomplishment and a nice moment for the football team, who was on hand to witness the historic event.

5) Finally, Albert Breer reported on Monday that the Patriots have inquired about moving up this week, although it remains to be seen how serious they might be.

The Patriots have at least touched base with teams in the top 10, though I spoke with one Sunday that was skeptical of how serious they are about trading up. I have heard New England connected to Horn, though I don’t think he’ll make it this far down the board. Of course, the big question on most teams’ minds is whether or not Bill Belichick will get aggressive if, say, Fields is there around No. 7 or 8.

Fields has been a name that the Patriots have been said to possibly be interested in, but the question has also been whether or not they value him enough to give up the draft capital to go up and get him.  The selection of defensive back Jaycee Horn makes sense because looking back at New England’s most successful runs in recent years, it’s come largely thanks to the improvement in the secondary.  With the uncertain futures of Stephon Gilmore and J.C. Jackson, taking Horn definitely seems like a logical choice if they don’t feel like giving up a ton to go after Fields.

So we’ll see.  But for now, buckle up, because it should be an interesting week.