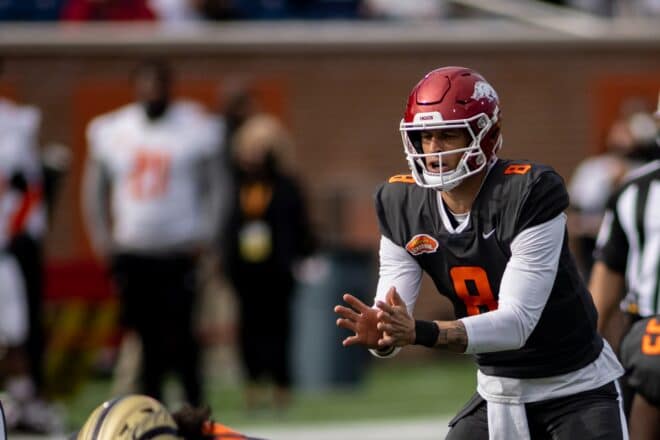 It’s been a crazy couple of months and with the draft finally nearing closer, we’ll hopefully find out by the end of this week how the Patriots plan on addressing things at their most important position.

With Cam Newton and Jarrett Stidham as the two quarterbacks currently on the roster, the biggest question has been who the team will potentially select in the upcoming draft to join them.  The board has been shifting with different scenarios over the past few weeks but at #15, the Patriots are unfortunately at the mercy of how things unfold ahead of them.

The first and second picks are essentially decided, with Jacksonville and the Jets already locked in on their guys.  From there, San Francisco seems to have narrowed things down to Mac Jones and Trey Lance, with Kyle Shanahan favoring Jones while the 49ers front office seems to like Lance.  However, after they pick, several reports have indicated that whoever isn’t selected will likely be gone long before the Patriots get a chance to pick at #15.  Justin Fields remains a name being thrown around, but he’s expected to be snatched up before New England can make a selection.  That means, unless Bill Belichick really wants one of them enough to trade up for them, they’ll have to make alternate plans.

One scenario that was brought up over the weekend came from Mark Daniels of the Providence Journal, who did his latest Mock Draft on Sunday.  In his mock, he had Texas A&M’s Kellen Mond being taken by New England with the 46th overall pick in the second round, but also had the club take a chance on Arkansas QB Feleipe Franks in Round 6 with the 197th overall selection.

Franks is an interesting player.  For anyone who follows college football, he initially was recruited by the Gators out of Wakulla high school in Crawfordville Florida but got off to a slow start.  He threw just 9 touchdowns with 8 interceptions in his freshman season as Florida went 4-7 that season.

However, the following year he turned things around.  He threw for 24 touchdowns and 6 interceptions and seemed like he had taken a terrific step forward.  But in 2019, he suffered a gruesome injury in the third game of the season where he dislocated and broke his ankle.

That, unfortunately, ended his career in Florida as Kyle Trask took over the starting role and the Gators went in a different direction.  Franks transferred to Arkansas where he threw 17 touchdowns and 4 interceptions but, more importantly, he completed 68.5% of his passes last season.

Daniels believes the Patriots “should think about double-dipping at quarterback” and he thinks Franks would give them another athletic player with “a cannon for an arm” to bring into training camp.

Taking it one step further, here’s another caveat to that pick.  If Franks doesn’t pan out, Senior Bowl executive director Jim Nagy suggested that he could potentially be useful elsewhere.

“It wouldn’t be a slot receiver, it would be more of a tight end projection, and that would be Arkansas’ Feleipe Franks,” Nagy said via HawgSports.com. “Now, Feleipe’s got all the tools. He’s one of the most intriguing quarterback prospects in this draft just because of the arm talent and all the game experience in the SEC. I think any team that drafts Feleipe is going to be committed to a long-term, 2-to-3-year plan with him. But if it’s just not working out over that span, I could see some time being open-minded enough to using Feleipe as a tight end.

“He’s 6-6. He’s got an 82-inch wingspan. He ran in the high 4-5s at his pro day. So very similar to a guy like Logan Thomas of the Washington Football Team. We saw what he did this year — 72 catches, six touchdowns. So Feleipe’s got very similar physical tools to a Logan Thomas. So, again, I think Feleipe’s a quarterback. But if two or three years down the road, it’s not working out, I could see that change being made.”

We all know Bill Belichick loves versatility, so it makes Franks an interesting prospect.  He’s a great athlete and came in with a 4.55 40 time on his pro day, which was dead even with Lance and just behind Fields.  He’s also a little more like a traditional pocket passer who moves around well and can make plays with his legs.

As for Mond, his selection by Daniels is also another one that makes sense, as the Patriots reportedly met with him at the Senior Bowl and Josh McDaniels has also even been exchanging texts with him this offseason.  Obviously, he doesn’t appear to be New England’s first choice but there are plenty of positive reports on Texas A&M standout and one would have to believe that being a day two pick might also be a motivating factor.

What the club will ultimately do remains to be seen.  But Daniels’ suggestion of Franks’ seems like it might be a good fit and makes a lot of sense, especially given Nagy’s assessment.

What the Patriots think is obviously a different story.  But for a team in need of options, it also seems like he might be a player who could be a good one on Day 3.