In the hours following Julian Edelman’s retirement announcement last week, the New England Patriots media team released two pieces of video highlighting some of the top moments from his career, and the most comical ones.

You can check out both in the YouTube links below.

On Thursday, head coach Bill Belichick offered up even more praise for Edelman during a press conference with the media, highlighting his difficult journey and the versatility he brought to the Patriots.

“Julian’s been one of the players that’s probably come further than most every other player that I’ve coached and his development from a quarterback in college to a receiver, a punt returner and even a defensive player, all positions that he never played, I’d certainly take sail as a punt returner as a receiver, for a number of years at those very difficult positions as quite an accomplishment, especially considering he wasn’t trained to do those things in college,” Belichick said.

“His toughness, his competitiveness, his play-making ability certainly is a big, big part of the backbone of our team. I have a ton of respect for Julian and what he accomplished in his career, how hard he worked to accomplish it and a great appreciation for all he’s done for me personally and our organization.”

Edelman retires from football as a three-time Super Bowl champion, a participant in four of them, and is second all-time in postseason receiving yards (1,442) and receptions (118).

As for what lies ahead for Edelman in retirement, maybe a return of smoothie tyme?

By: Robert Alvarez
Mac Jones shares post over Instagram reflecting on his rookie season while also voicing his appreciation for his teammates and fans.
4 mins ago

By: Robert Alvarez
Former Patriots WR Deion Branch returns to his Alma Mater University of Louisville as the director of player development.
58 mins ago

By: Robert Alvarez
Brandon Bolden shuts down retirement rumors following a misinterpretation of his Instagram post by fans on social media.
2 hours ago 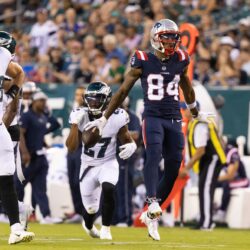 PHOTO: Kendrick Bourne Reflects Back On Debut Season With Patriots

By: Robert Alvarez
Kendrick Bourne reflects back on his debut 2021 season with the Patriots in his latest Instagram post.
3 hours ago
wpDiscuz