9 months ago at 11:41 am ET
Follow @IanLogue
Posted Under: Patriots News 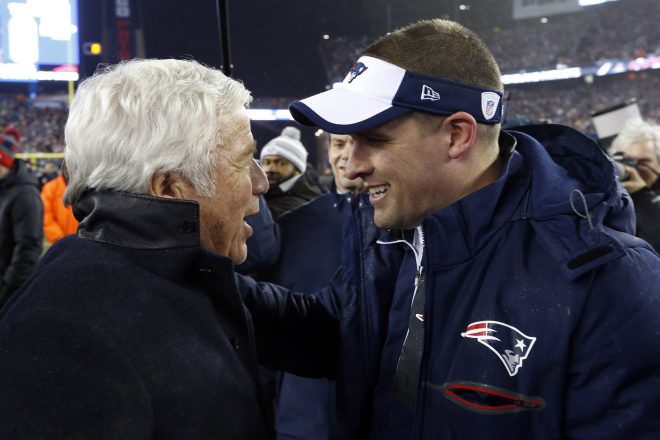 1) Maurice Jones-Drew did a mock draft over at NFL.com and he predicts a trade-up by New England after San Francisco let Mac Jones go in favor of Justin Fields.

In his scenario, he had a trade between the Patriots and the Lions for the #7 overall selection, which allowed New England to select Jones.

From there, the Lions went on to select Penn State linebacker Micah Parsons with the 15th overall pick.

What happens at Fields’ pro day will likely be the deal-breaker as both New England and San Francisco will be on hand for that one, which will likely make up Kyle Shanahan’s mind in terms of who he’ll want to move forward with.

Most rumors out of the Bay Area seem to favor them going with Jones, so it will be interesting to see if that changes as he’s a player the Patriots seem to like.  But with the 49ers sitting in the driver’s seat at #3 overall, whether or not New England gets the opportunity to take him remains to be seen.

2) Pro Football Focus also did a recent Mock, which also has the 49ers taking Fields but they went that route because they believe Fields is the best option, not for any other reason related to the team itself.  They then had a trade-up by the Patriots with the Giants to 11 overall for New England to select Jones.

The discussion out west seems to be conflicted, as they like the versatility that Fields brings since he’s an athletic quarterback who is both a good athlete and solid throwing the football.  That would allow Shanahan to get creative and allow the 49ers to do different things, with the team likely looking at what Patrick Mahomes has done in Kansas City and believing they might be able to do the same with fields.

At the same time, Jones provides a more traditional style of play, with the Tom Brady comparisons also likely swirling in Shanahan’s mind.  He’s under a lot of pressure this season to get this one right, so it’s going to be interesting to see if he steps out of his comfort zone with Fields or plays it safe with Jones.

Either way, that pick may ultimately decide if New England takes someone in round one, or if we might instead see them alter course with a later round selection. 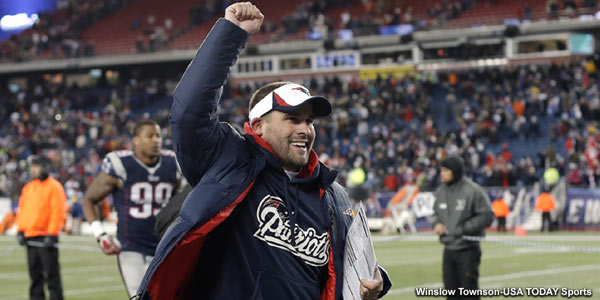 How would McDaniels change the offense with Fields at QB?

3) One big question would then be whether or not the Patriots would take Fields if he were to fall down the board, which would obviously be a massive shift from how they’ve operated in the past in terms of their offense.

After seeing what they did with Cam Newton last season, it’s possible that bringing in an athletic player like Fields could work.  However, knowing the complexity of their offense, which even a veteran like Newton struggled with, it would likely keep him out of the line-up for at least this season.

Greg Bedard of Boston Sports Journal pointed out that taking Fields is a long-term deal that would cause a commitment on their part to completely change their offensive philosophy to fit his strengths, which is the thing that presents the biggest obstacle.

For a team that often finds itself in pressure situations given the level they’ve been at for so long, that’s where Bedard believes an athletic player only takes them so far.  The ability to make the big throw in a tight game is still what’s most important and he believes that will be the defining factor.

From a recent column:

To them, the NFL game still comes down to whether or not you can make a tight-window throw on third-and-long with the game on the line when the opponent is playing 2-man. A player’s legs are really not going to help them all that much in that scenario, unless your name isPatrick Mahomes, but he’s a unicorn.

That style of play didn’t work out too well last season as the Patriots finished 7-9, but that was primarily because of Newton’s struggles throwing the football down the stretch.  When you take into consideration someone like Russell Wilson, who Fields has drawn comparisons to, seeing him develop into that type of passer would likely have provided a different outcome.

If they did choose to go that way, the timing for a transition to someone like Fields certainly makes sense since playing behind Newton would allow them to work toward that style of offense compared to seeing him play behind a traditional pocket-passer.  But again, whether or not they’ll even decide to go that route remains to be seen.

4) Meanwhile, it’s been sort of interesting to see the ascension of the Cleveland Browns, who have finally started turning things around. Cleveland managed to work its way back into NFL relevance and finished by putting a smile on the face of every Patriots fan by pulling off the massive upset against Pittsburgh, knocking out the self-proclaimed Super Bowl favorites in the first round of the playoffs this past January.

Granted, that all came to an end the following week out in Kansas City, but they proved they’re on the way up and that optimism seems to be making its way around the league.

Colin Cowherd recently talked about the offseason moves made by teams around the NFL and heading into 2021, he believes the Browns now have a roster that’s among the best in the game.  In fact, he puts them just behind Tampa and Kansas City at #3.

“In my opinion, Tampa’s the best, Kansas City second. I’d put Cleveland third,” Cowherd said. “Especially if they sign Jadeveon Clowney tomorrow, which is expected. Best offensive line, best running back tandem, great tight end and wide receiver, major upgrade in the secondary with Troy Hill and John Johnson II. That was their weakness…They’re loaded and they have a competent head coach.”

They definitely seem to have a bright future and it’s pretty amazing to see Cleveland starting to be talked about among the tops in the league.  That’s a story the Jets are likely hoping plays out with their own club, but given what we know about Gang Green, that still seems like a long shot. 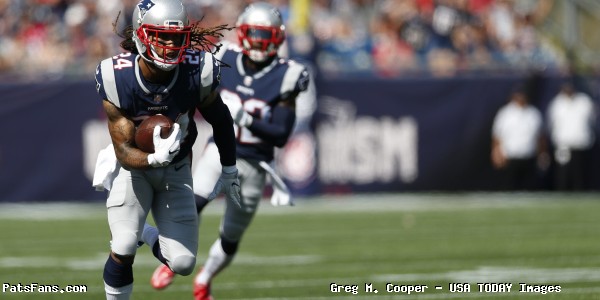 5) Stephon Gilmore’s future is obviously a big question mark this offseason, with no resolution still in sight heading into 2021.

Gilmore has been quiet recently and he told Ben Volin of the Boston Globe earlier this week that he’s just letting things play out and said at this point, it’s out of his control.

With Gilmore set to turn 31 in September, he’s approaching the age where defensive backs start to break down and that could potentially be where New England might be hesitant in terms of offering him another long-term deal.  However, the good news is that Gilmore has said he’s open to an extension, so now it’s just a matter of whether or not the two sides can reach an agreement.

For now, Gilmore said he’s still happy to be a member of the team that took a big chance bringing him here and he’s hopeful things work out.

Is it Shanahan or Lynch making the draft decisions for SF? Maybe collaboration but I presume GM Lynch has the final say.

That’s the tough question. I’ve read conflicting reports on that, as Lynch was rumored to have the final say and that Shanahan hasn’t established enough of a record as a head coach to overrule him. Yet, another report had Lynch saying otherwise. So that’s what is making it so hard to predict how it might play out.

Also, not sure if you can answer this as I can’t find the details. If the Patriots trade for a 3rd round pick higher than that stripped from them do they lose that higher pick and instead get their original 3rd round pick back?

By: Steve Balestrieri
So afraid were the Patriots coaches of Buffalo’s speed advantage, they refused to bring pressure on Allen for fear of getting burned.
20 hours ago

By: Bob George
The Bills completely obliterated the Patriots, as they scored touchdowns on all seven of their drives in a frustrating loss Saturday night.
21 hours ago