On Friday, Grammy nominated hip hop artist and actor Earl Simmons, best known by his stage name DMX, passed away according to his family.

Simmons had been hospitalized in New York since last week following a heart attack at his home triggered by an overdose.

“We are deeply saddened to announce today that our loved one, DMX, birth name of Earl Simmons, passed away at 50 years old at White Plains Hospital with his family by his side after being placed on life support for the past few days,” his family said in a statement to the Associated Press on Friday. “Earl was a warrior who fought till the very end. He loved his family with all of his heart and we cherish the times we spent with him. Earl’s music inspired countless fans across the world and his iconic legacy will live on forever. We appreciate all of the love and support during this incredibly difficult time. Please respect our privacy as we grieve the loss of our brother, father, uncle and the man the world knew as DMX. We will share information about his memorial service once details are finalized.”

As ESPN Boston’s Mike Reiss later noted, DMX was a favorite of the Patriots during their practices at Gillette Stadium, with his music often playing over the loudspeakers to help keep players loose.

When the Patriots needed a little extra spark at practice, DMX delivered. https://t.co/rZHJdwJKjF

Following word of his passing, current and former members of the Patriots reacted with tributes to DMX over social media. 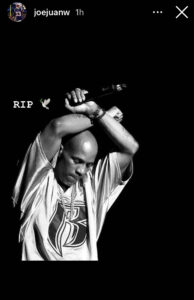 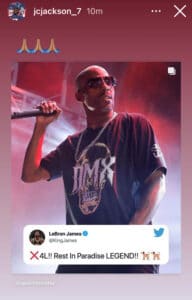 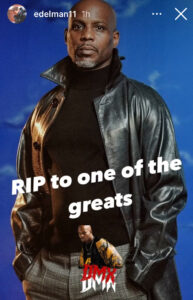