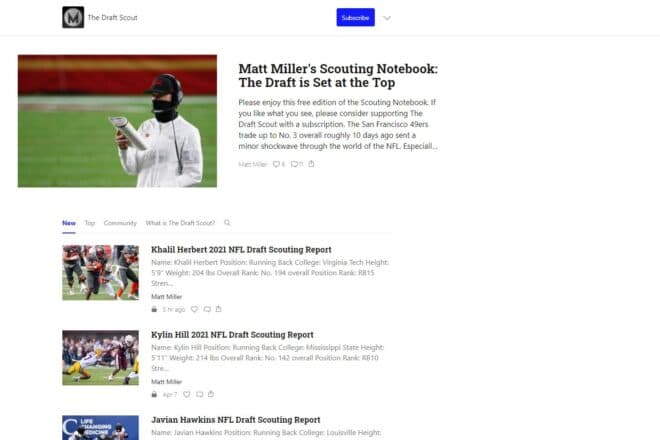 The new kid on the block, Matt Miller, brings his Draft insight direct through The Draft Scout.  Matt launched this new Draft Service on February 11th.   Miller is sponsoring the Patsfans Draft Contest by providing a Free Year subscription prize to the winner.

According to his website, Former Bleacher Report NFL Draft analyst and insider Matt Miller brings a decade’s worth of insights, knowledge, connections, and sources to The Draft Scout where all things NFL offseason for all 32 teams gets the attention and coverage they deserve.

At Bleacher Report, we built a community of readers and listeners who loved the NFL and NFL draft; that’s what we’ll do here, too. Subscribers will get access to in-depth reporting, stories, rumors, news, scouting reports and mock drafts but they’ll also be part of the process and get access to:

In the past, you may have felt like finding Matt’s work was sometimes impossible. You won’t have to worry about missing a post or scrolling through an app to find articles anymore.

No more missing mock drafts or turning on tweet notifications hoping you can find a writer’s newest work. Every new edition of The Draft Scout goes directly to your inbox where you can read each article without ever leaving your email app.

Be part of a community of people who care about journalism and care about football and start gaining access to all new stories as they post; including access to special subscriber events and perks!

Born and raised in the Joplin, Missouri area, Matt Miller spent the last 10 years building the NFL and NFL draft coverage at Bleacher Report into what it is today. A father of two and avid fan of bourbon, barbecue, and Kansas City Royals baseball, Matt writes from his office in downtown Joplin where he also hosts a daily radio program Mic’d Up and runs his foundation, The 417 Foundation benefitting low-income families in need.

At The Draft Scout you’ll get the unbiased, real articles and content you want; not whatever was clicking best that week. If you care about real news and information surrounding the NFL and NFL draft, you’ll want to be here for mock drafts, player rankings, scouting reports, rumors, and news breakdowns, plus a community that loves the draft as much as you do.

So why pay $7 to read articles? Well, for one, it’s to support the writer. There are no ads or sponsorship deals. You’re allowing me to report, study and write the type of content you want. Also, it’s to be a part of something. $7 a month isn’t just for articles—it’s to be a member in a club that loves the NFL and NFL draft and will live and breathe that 365 days a year.

Check out his site https://www.thedraftscout.com