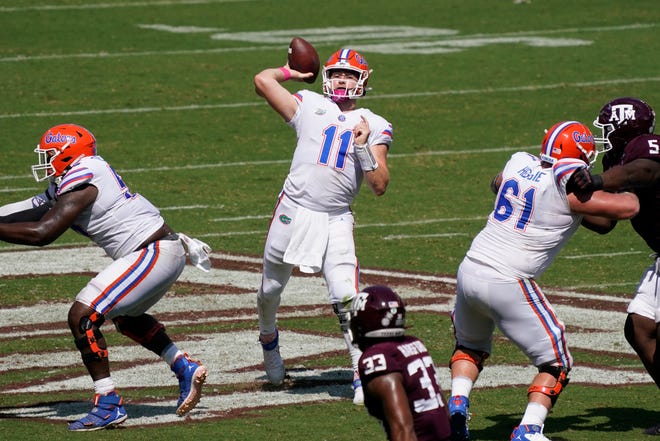 As the 2021 NFL Draft draws closer we’ll profile some of the players that may be on the Patriots’ radar or that we feel would be a fit.

The Patriots have re-signed Cam Newton on a one-year deal and his contract is more akin to a backup than a starter. While the reaction to the possible earnings that Newton can earn in 2021 raised the ire of fans and media, for Newton to earn those incentives, would mean that the Patriots would have to win the Super Bowl.

While the endless talk of reacquiring Jimmy G. seemingly never stops, we’ve laid out all the reasons why that isn’t going to happen. So, in absence of a trade for another veteran, it seems like the draft is the answer. So…who will the Patriots draft?

A lot depends on what it will take to move up into the top five of the draft in a trade with either Atlanta or Cincinnati to land one of the top QB prospects in the draft. The 49ers created a stir with what they paid the Miami Dolphins to move up nine spots for the #3 pick. Will Bill Belichick pay a similar ransom to move up to #4 or #5?

While we’re all working out possibilities for those, (and the Patriots have reportedly reached out to both Atlanta and Cincy according to the Athletic’s Jeff Howe), what if the team decides that the compensation is too rich for an unproven player?

They could actually trade back into the second round or stand pat to select a QB in Round 2 of the draft.

Trask is a big framed QB at 6’4, 239 who has had to claw and scratch his way up since high school. He wasn’t even a starter in HS but in limited action created enough tape to get a shot in Florida. Once again he had to ride the pine and wait for his turn, which came four games into the 2019 season. After an outstanding redshirt junior season, Trask had a fantastic 2020.

But despite that, Trask isn’t considered one of the top QB prospects.

– Excellent ability to slide in the pocket and make plays

– Played under center, as well as shotgun/pistol a rarity in the college game today

– Limited athletically, will not be able to scramble

– Arm strength is adequate but not great

– Processing time will have to increase at the next level

Jarrett Stidham, although the team could consider keeping three QBs

Trask does a lot of things well, he is a smart, cerebral QB who rarely makes mistakes with the ball and rarely turns it over (15 career INTs in 28 games), something that resonates with Belichick.

He does a very good job of looking off wide receivers and moving safeties with his eyes and has an over-the-top delivery that is very efficient. His back-shoulder throws are outstanding and he delivers the ball accurately and on time.

Watching Trask, one gets the impression of watching a young Ben Roethlisberger, and while he doesn’t have the arm strength of Roethlisberger’s younger years, but the size, accuracy, and toughness would make him an interesting developmental QB.

If the Patriots aren’t able to move up into the top 10 of the draft, then they’ll be in the market for a QB on Day 2. And while Trask may not be the player that fans aren’t clamoring for, he may be the guy they choose.

A highlight film for Jones from JustBombs Productions can be seen here: