2 years ago at 9:42 am ET
Follow @IanLogue
Posted Under: Patriots News 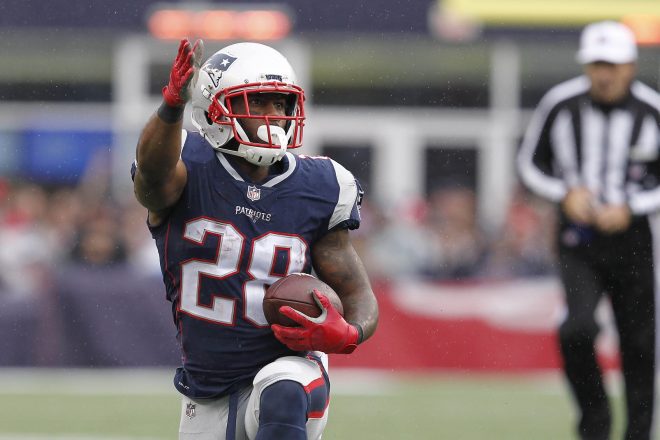 1) There was a bit of a surprise on Monday night, with running back James White reportedly re-signing with the team.

According to ESPN’s Jeremy Fowler, White is returning on a 1-year deal worth $2.5 million, which is fully guaranteed.  It’s a bit of a surprise given the fact he and Cam Newton never really got on the same page in 2020, which made it hard not to wonder if he might decide to move on this offseason.

White finished last season with just 49 receptions for 375 yards and 1 touchdown over 14 games, a far cry from the 72 and 87 receptions he had in 2019 and 2018 respectively.  The dip in production is largely due to the fact Newton struggled to get him the football, often getting it there late or misfiring as the two couldn’t quite get in sync.

His return is certainly good news for the offense, as it keeps New England’s core group of backs together heading into 2021.

2) Another surprise was the return of Lawrence Guy, who many believed might have been heading to Miami.

Instead, Mike Reiss of ESPN reported that Guy is returning on a 4-year deal, which will keep him in New England’s defense for the foreseeable future.

Guy has been a key part of the Patriots defensive line and his departure would have definitely stung.  He had recently visited with the Dolphins and it appears he gave the club an opportunity to retain him and they got it done.

The veteran has been terrific since joining the team four seasons ago, missing just two games over that span.  He finished last season with 47 tackles and 2 sacks in 2020 and his return solidifies a pretty good group up front that should be fairly formidable in 2021.

3) As we head further into the offseason, there appears to be an ongoing battle between the NFL and NFLPA about how that all is going to play out.

ESPN’s Chris Mortenson reports that the NFLPA wants a repeat of how they handled things in 2020 where the offseason was entirely virtual, but it remains to be seen if they’ll get their way.

Most coaches around the league will readily admit that having players working together in the building for OTAs and minicamps is one of the more important aspects of getting them immersed prior to training camp.  With the NFL also set to go to a 17-game regular season, Mortenson reports that the union is calling for a revision to the off-season and in-season work rules.

If the NFL does get its way, one key aspect the NFLPA is pushing for is daily coronavirus testing and the same protocols that were in place during the season, which obviously make sense.  But it will be another side story to keep an eye on, as the 2021 season will certainly be a little different with another game on the table.

Reynolds has been primarily a special teams player and given Bill Belichick’s emphasis on the kicking game, his addition adds to a pretty good group that was one of the best in the league in 2020.

The veteran also has some experience in the postseason, having played in seven playoff games over his career.

Reynolds played in all 16 games with the Falcons last season, finishing with 3 defensive tackles and 10 special teams tackles.

5) Offensive lineman Justin Herron was one of two men who recently received the “Outstanding Service” award from the Tempe Police Department after his role in rescuing an elderly woman from being sexually assaulted over the weekend.

According to published reports, Herron was reportedly walking in a park in Tempe late Saturday morning when he came to the aid of a 71-year old retired school teacher who was being attacked by a 30-year-old man who was also threatening to rape her.

Instead, Herron and another resident tackled him and held him until police arrived and made the arrest.

“At that moment, I was in shock,” Herron said via 12news.com. “It was 11 a.m., middle of the day, in a very open field and the fact that it happened there at that time was just very shocking. I wish I could tell you what I was thinking, but I could just tell someone needed help. All I could do was rush myself over there to make sure I could help the victim and I could comfort her and be the best person I can be.”

Police acknowledged Herron’s efforts and noted that had he not been there, there’s no telling what might have happened.

“If not for the swift actions of Mr. Justin Herron and Mr. Murry Rogers, this vicious attack could’ve been much worse,” Tempe police Det. Natalie Barela said.

It’s an incredible story, and it’s definitely a good thing the two were around to prevent what could have been a horrible outcome.

By: Mark Morse
Green Bay comes into this game with a 14-game home unbeaten streak.  It's third to two Patriots records of 16 and 18 games.  They are…
20 hours ago
wpDiscuz