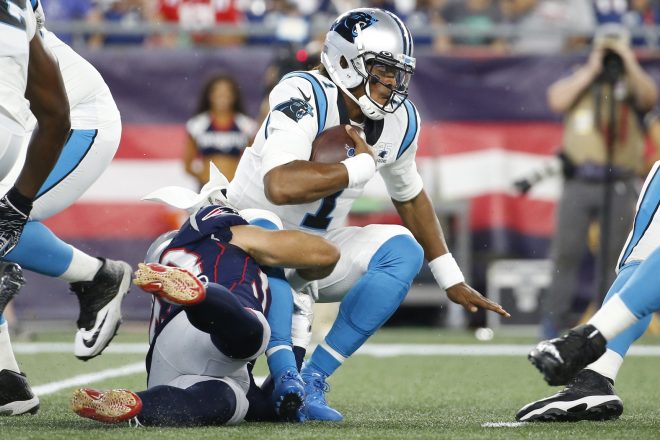 The Patriots improved to 3-0 in the preseason with a 10-3 win over the Carolina Panthers at Gillette Stadium on Thursday night.

As we’ve seen during the first two preseason games with mainly the backup defense, the starting unit played for the first time and was dominating, holding Carolina to just 29 yards in five first-half drives. The Panthers could only manage two first downs and were 0-5 on third downs, managing just 1.7 yards per play.

Once again, despite not having “a dominant pass rusher” the unit hounded Cam Newton for a few series before he left with a foot injury after being sacked by Adam Butler. Newton played in his first preseason action after offseason surgery.

The starting unit registered three sacks with Butler, Michael Bennett, and Kyle Van Noy taking down the Panthers’ QB. Ufombra Kamalu had the Patriots other sack. Carolina only had a total of 99 yards of offense with 48 passing and 51 rushing and could only muster seven first downs in the entire game.

Tom Brady and much of the first unit offense were in for three series and scored one touchdown, with the other two drives wiped out by penalties. With no Julian Edelman, N’Keal Harry, Demaryius Thomas, Maurice Harris, Braxton Berrios, and Josh Gordon [NFI] in the lineup, Brady was targeting mainly Phillip Dorsett [5 targets, 5 catches for 41 yards] and rookie Jakobi Meyers.

Meyers got off to a rough start with Brady. He stopped running on a deep route, had a drop on a drag route where the pass was slightly behind him and had another pass batted away by cornerback James Bradberry.

Brady ended up 8-12 for 75 yards, his two best throws were an 18-yard laser down the seam to Ryan Izzo and a nicely zipped pass on the outside to Dorsett. He looks ready to go.

Dorsett was targeted five times by Brady and twice by Stidham and hauled in all seven passes thrown his way.  He looked quick off the line and sure-handed as he and Brady were locked in one another. It was a good veteran performance as he stepped up with all of the other players missing and with Harris missing, Dorsett has solidified his grip on a roster spot. Many have him neck and neck with Harris. He didn’t hurt his chances with a solid game tonight.

Michel looked quick to the hole, decisive and elusive. He made people miss with some outstanding, explosive cuts and looks absolutely ready for the regular season. While he had just 36 yards on 10 carries, those numbers are skewed somewhat as he had two runs including a really nice 30-yard run wiped out by a holding penalty downfield, [Meyers] and was stuffed on the goal line twice, once where the TE [Saubert] missed his block.

The Patriots starting unit did a good job of protecting Brady and other than some holding penalties that have to be cleaned up, did a nice job of opening holes for Michel and the running game. And this was against a very good Carolina front seven.

The starting unit of Isaiah Wynn, Joe Thuney, David Andrews, Shaq Mason, and Marcus Cannon was solid overall. Wynn, other than a whiff on a screen to Dorsett once again appears to be well on his way after his injury last summer that wiped out his rookie season.

The backup offensive linemen had a rougher evening. Carolina sacked Jarrett Stidham five times and registered eight QB hits. While two of the sacks were the result of the rookie QB holding the ball too long, this wasn’t a great night for the backups.

During the game, Kyle Van Noy, Nate Ebner, Damien Harris, Ben Watson, Gunner Olszewski, Lance Kendricks, and Stephen Anderson all left with injuries. Van Noy and Ebner returned, the rest did not. Brandon King was carted off with what appeared to be a serious leg injury.

Jarrett Stidham – once again appeared good, not as good as last week but his protection wasn’t nearly as strong. Belichick made the decision to replace Brady not with Brian Hoyer, but with the rookie. This was a chance to see what the rookie can do against the better players who will be there in the fall. They know what they have in Hoyer, so he sat. Stidham completed 15-19 for 134 yards. He hit some tight windows.

Gunner Olszewski – had a really good night in the punt return game. He called for a fair catch on his first where it appeared he had plenty of room to run, but after that he had four returns for 63 yards. He caught one pass for 15 yards from Stidham and it was then that he was injured and didn’t return.

Stephen Gostkowski – missed a field goal for the third straight game although this one was firmly on the hands of rookie Jake Bailey who put the ball down with the laces facing the kicker….”laces out Dan!” This will have to be cleaned up moving forward.

Jake Bailey – Speaking of the rookie, despite his gaffe holding for the field goal, he was outstanding in his punting, averaging 48 yards in his four attempts, putting two inside the 20-yard line and with excellent hang time. The Panthers had just five yards on three punt returns, because of how long the ball was in the air.

Calvin Munson – continues his strong summer. He appears quick and is all over the field. He had four tackles, one for a loss, plays special teams and with King down, may just crack the 53-man roster.

Jakobi Meyers – After an inauspicious start with Brady, the rookie WR settled down with Stidham and made seven catches 74 yards. He’s shown good chemistry with Brady during joint practices, he’ll have to learn from this and shake it off.

Penalties – The yellow flags continue to pile up against the Patriots, this has to be a very sore spot with Belichick and the coaching staff. Last week they got flagged numerous times for hands to the face, tonight it was holding. However, the Panthers did challenge two non-call Defensive Pass Interference plays and both were upheld.

The Giants come in a week from tonight for the final preseason tilt.