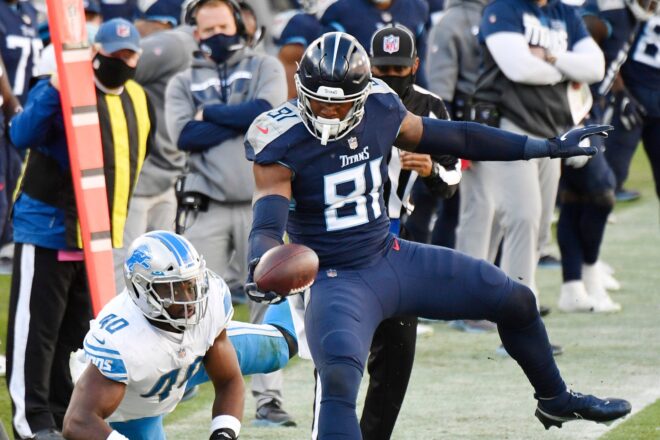 Oops, well as the old saying goes, money talks and …something else walks. The Patriots have holes to fill and on the first day of legal tampering, they’ve filled a lot of those holes with some quality, and expensive signings.

The Patriots did lose Joe Thuney, which wasn’t a surprise, we figured he’d price himself out of New England. He agreed to a five-year deal with the Chiefs.

Patriots’ tight ends the past two seasons have been dead-last in receptions (55), receiving yards (673), targets (87), and receiving touchdowns (3) in the entire NFL. They drafted Devin Asiasi, and Dalton Keene last spring but they didn’t add much in their rookie seasons. The hope is they will continue to develop, but they needed help there…and badly.

On Monday, they found one. One of the best tight ends in free agency, the Titans’ Jonnu Smith agreed to a four-year deal worth $50 million dollars with $31.25 million guaranteed. Last year Smith caught 41 passes for 448 yards and eight touchdowns. All eight scores came in the red zone. The Patriots as a team, had seven red-zone TD receptions, also last in the league.

After Tyler Lewan went down with an injury, he was asked to block more which hurt his production as did an ankle injury. But Smith is only 25 and should be a key contributor to the offense.

He’s an ascending player and very versatile, the Titans even used him as a tailback. And we heard from someone in the know, that Smith loves Cam Newton and came to New England because of Newton. So, perhaps the Newton signing has paid dividends already.

Tight end? Check. Wide Receiver? No offense to Jakobi Meyers who is a favorite around these parts, but when the UDFA is the top option at wide receiver after Julian Edelman went down, then things aren’t good.

The Patriots addressed that need with two free agents, former Raiders WR Nelson Agholor signed a two-year deal worth $26 million. Agholor caught 48 passes for 896 yards and eight touchdowns in 2020. He had 666 yards after the catch (YAC), something else sorely missing in the Patriots air attack.

The 6’0, 200-lb wide receiver is 28 and had a fresh start with the Raiders after leaving Philly as a disappointment.

The Patriots also agreed to terms with former 49ers WR Kendrick Bourne on a three-year deal worth $22.5 million. The 6’1, 203-lb Bourne had 49 catches for 667 yards and two touchdowns for San Francisco.

The sure-handed Bourne was originally signed as a UDFA in 2017 out of Eastern Washington. After his rookie season, he caught 42 passes for 487 yards and four touchdowns in 2018. During the Niners Super Bowl run in 2019, he added 30 catches, for 358 yards, and five touchdowns.

Besides the offense, the Patriots added four new defenders as well as re-signing two of their own free agents. Two of the biggest issues with the Patriots’ defense last year were the rush defense, which was atrocious at times, and the absence of a pass rush.

Again the early feeling here is that they addressed those with more free agency and the draft still to come. The big prize on defense was former Ravens OLB/Edge Rusher Matthew Judon. The feeling here, (and we weren’t alone) was that Judon would be priced out of the Patriots’ price range but the team agreed to a four-year $56 million deal with $32 million of it guaranteed, according to Adam Schefter.

Judon, 28, is a two-time Pro Bowl OLB/edge rusher who has been the Ravens’ best pass-rusher over the past three seasons. His 30.5 sacks since 2017 led the team. He played under the franchise tag a year ago earning $16.8 million.

Judon is well-known as a player who prepares and practices as hard as he plays. The Ravens used Judon as a versatile, chess piece, moving him all over the field and finding matchups that were favorable. That will probably be how Bill Belichick plans on using the versatile player as well. In five NFL seasons, he’s only missed four games, so he’s been durable as well.

Asked Monday afternoon why he chose New England, Judon responded with, “they chose me.” The Patriots have high hopes for pass rushers Josh Uche and Chase Winovich who are still learning on the job. But the pair teamed with Judon should be a much-improved group in 2021.

Godchaux, 26, who is 6’3, 311-lbs is a big physical run-stuffer who can play nose tackle, something the team was missing a year ago. He signed a two-year deal worth a reported $16 million dollars. Anderson is an experienced, versatile 3-4 Defensive End or a 4-3 defensive tackle who is another good run stuffer. He was released by the Jets earlier this month, so his signing, a two-year deal worth $7 million is already official.

The Patriots also signed a very, versatile defensive back, Jalen Mills who was with the Eagles, who agreed to a four-year deal worth $24 million. Mills, 26 is thought of as a corner first and foremost, which set tongues wagging that Stephon Gilmore was on the trading block. That could be true, however, he played in the slot but also played a ton of safety last year. He’s very versatile so the team may be looking at him as a box safety and moving Kyle Dugger to free safety, being the eventual replacement for Devin McCourty. But Mills may be the 2021 replacement for Jason McCourty, a guy they can move all over the backfield.

The Patriots also re-signed DL Carl Davis and Deatrich Wise who signed a four-year deal worth $30 million with $10 million guaranteed.

I guess that Miguel @Patscap is burning the midnight oil tonight.

But for a Day 1 of legal tampering…the Patriots were very, very active and have greatly increased their depth at several spots.

By: Ian Logue
When it comes to beating the Green Bay Packers on Sunday, the New England Patriots just need to do something they haven't been able to…
10 hours ago

By: Robert Alvarez
Check out the mic'd up video footage from the Patriots sideline during the home opener vs the Baltimore Ravens.
11 hours ago

By: Ian Logue
The big question heading into this weekend for the New England Patriots will clearly be whether or not back-up quarterback Brian Hoyer can get the…
13 hours ago

By: Mark Morse
Green Bay comes into this game with a 14-game home unbeaten streak.  It's third to two Patriots records of 16 and 18 games.  They are…
18 hours ago
wpDiscuz