2 years ago at 8:33 am ET
Follow @IanLogue
Posted Under: Patriots News 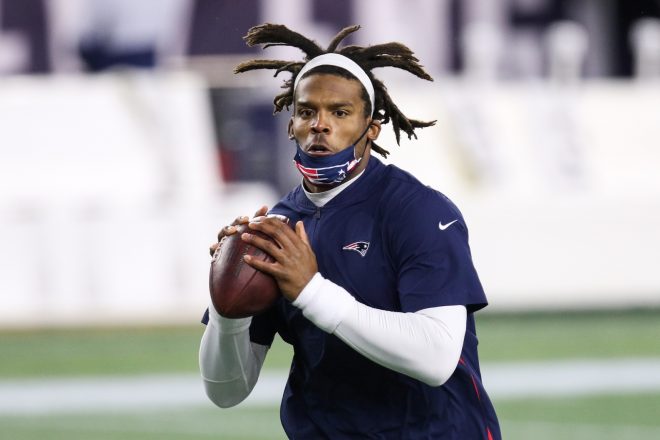 While most of the news on Monday centered around Cam Newton’s exchange with a camp member that went viral for all the wrong reasons, there was something a little lighter about the former Pats QB that came out on Monday.

Newton recently sat down with Brandon Marshall, Chad Johnson and Fred Taylor in an “I AM ATHLETE” video for a conversation that featured a variety of topics.

The opening exchange was pretty funny. Anyone who followed Newton this season likely knows that he’s a Vegan and he’s quite committed to his diet. Given his problems this year, (see this morning’s News/Notes column), Johnson tried to blame the QB’s diet and offered to help get him into shape.

However, there was just one problem. Newton had to get on board with Johnson’s less-than-healthy meal advice.

“I’m going to get you together too,” said Johnson. “You been eating healthy your whole career?”

“No? You have any injuries early in your career?” asked Johnson

“No, lingering…I had to have surgery early in my career,” replied Newton.

“Were the injuries, early in your career, were they hampering where you weren’t able to function and produce?” inquired Johnson.

“I know where you’re going, Bro,” answered Newton, clearly on to Johnson’s line of questioning.

“Talk to me,” pushed Johnson.

Johnson was undaunted. “Just talk to me, don’t even pay the camera no mind. [Just] you, me and the barbershop talking.”

“OK, well I think, I need you, this upcoming season, to change your diet,” said Johnson. “Go back to eating Honey Buns…”

“No you wouldn’t,” argued Johnson.

“Yes I would,” said Newton.

But Johnson wasn’t ready to take “no” for an answer.

“Listen, if you need me to come live with you, I’ll come stay with you and make sure you don’t gain any weight,” said Johnson. “Because I work out like a mad man…”

Fred Taylor then interjected with, “You know what his diet is?”

Newton later asked him about what the potential meal plan would be, which Johnson said for breakfast would include McDonald’s hotcakes, Sausage McMuffin, a large orange juice. For Newton’s snack Pop-tarts (Strawberry, frosted icing – from Publix or Winn Dixie) and 6 boiled eggs. For lunch, Johnson said that would include a trip to Bahama Breeze, where he would have pasta, with extra chicken and no asparagus. Before they get dinner, Johnson said Newton can throw his “healthy [expletive]” in there as a snack. Then for dinner, Johnson said would be “Soul Food.”

“Listen, this is every day,” said Johnson.  “I need you for six months, that’s all I need. I need six months and you don’t even have to pay me.”

Newton then went on to tell him he currently weighs 250lbs. Johnson said he could get him down to 210lbs in two months.

You can see more from the episode below, which was surprisingly interesting: