2 years ago at 8:18 am ET
Follow @IanLogue
Posted Under: Patriots News 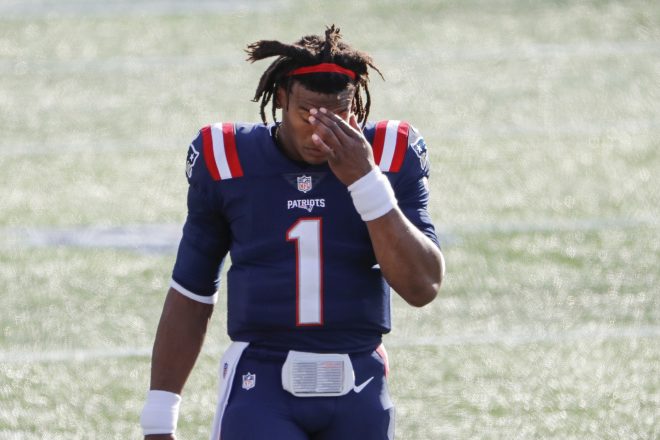 1) Cam Newton appeared on “I AM ATHLETE” on Monday, which featured an interview with Chad Johnson, Brandon Marshall and Fred Taylor, with both players sitting down and talking with Newton about a variety of topics.

One of the most interesting parts of the segment was when Marshall inquired with Newton about what happened to him when he went through his COVID-19 diagnosis, and how it affected him moving forward. Marshall, who also went through his own illness from COVID, mentioned that it did affect him so he was curious to hear what the former Patriots QB’s experience was like.

Newton talked a little bit about his symptoms, but prior to Marshall asking him directly about what he went through, Newton first alluded to the fact that he had limited time to prepare for the season and when he was diagnosed, the train continued on without him and he had a hard time catching back up when he eventually returned.

“I used the analogy today,” explained Newton. “So from Atlanta Georgia, originally, I was driving to Miami. Two different cars, everybody’s on the same wave, I’m following this car [gesturing toward the front car]. I make a phone call to the front car, I say, ‘I’ve got to get some gas but you all go on.’ Boom, they’re gone.”

“I get some gas, I get some food, stop by McDonald’s, whatever, but they’re gone. And then by the time I get back on the road, I’m behind. And I was one of the first athletes, well…football players, to catch it. And I’m over here like, ‘how did I get it, where did it come from?’ And everybody’s in this panic mode, as we should still be.”

“But yet through it all, it just happened so fast and when I came back, it was something that…that’s where the lack of offseason, the lack of having time really being invested in the system kind of showing itself.”

Newton described what it was like the morning he found out,

“So just to paint the picture, I got the phone call at 5 in the morning. And it was Saturday, so I didn’t need to be up that early. Usually, everybody knows the football schedule on Saturday is just walkthroughs and we got a later start time and when the phone call came, I thought I was dreaming. The athletic trainer called me and was like, “You tested positive.”

“You were asymptomatic, then, basically,” said Johnson.

“The only thing that I’ll probably say that really hit me was my smell…I really couldn’t smell. I didn’t realize that until my cousin brought it to my attention. I was like, ‘Man…I really can’t smell.’ It didn’t dawn on me that I lost my smell, but if I really had to finger point something, that was it. It was just like walking out in the morning with that fresh air and like your nose is right. It takes you some time to really collect yourself and do that.”

“By the time I came back, I didn’t feel comfortable.”

Marshall then asked him, “Physically?”

“Skillfully,” replied Newton. “And a lot of that discomfort came pre-snap.”

“Going back to that analogy, the offense kept going and I was stopped and stagnant for a week…two weeks. Then by the time I came back, there was new terminology. I was like, ‘Hold on, hold on, hold on, go back to level one. But I wasn’t just trying to learn a system for what it was, I was learning, let’s be honest, a 20-year system in 2 months.”

That was clearly the point that stopped what had been a relatively good start for the veteran QB, as he was never the same from that point on and it showed for the rest of the season. Newton still claims he was fine physically and it was the mental hurdles that held him back.

However, looking back, Newton said he was still fine with how it ultimately played out.

“Let me clear this up,” said Newton. “I would not have wanted it any other way.”

“At the end of the day, you have to go through things in that type of manner to make you realize, that you can’t skip processes.”

2) We also learned what Bill Belichick’s favorite word is during this video, which Fred Taylor pointed out.

Taylor asked Newton, “Were you ever considered a ‘moron’? That’s Bill’s favorite word.”

“He’s got a lot of sayings,” laughed Newton.

When asked if Bill ever called him that, Taylor laughed again, answering, “No, I ain’t no f***n moron.”

Johnson also chimed in, saying that he’s seen Belichick “cuss Tom[Brady] out, day one on the field, they going at it, cursing each other out.”

Definitely a fun fact and a nice little glimpse behind the scenes at the Patriots head coach. 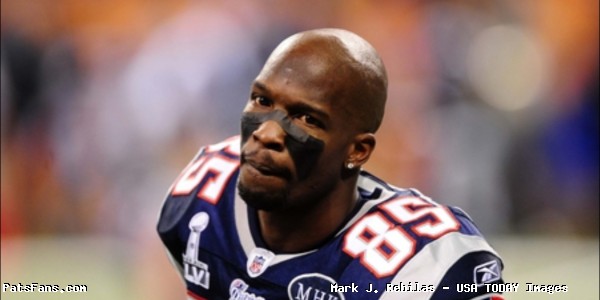 Johnson had a tough time in New England.

3) Meanwhile, we’ll pick on Johnson, who still remains in denial about his time here.

Many likely remember the struggle that Johnson went through during his tenure in New England, with the receiver struggling big time when it came to getting comfortable in the offense.

Marshall asked Johnson directly if he had trouble with the “Patriot Way”, and the former receiver dismissed that notion and immediately seemed to get irritated.

“It’s still football at the end of the day,” quipped Johnson. “They had too many motherf*****s … Me, Wes Welker, Gronk, Aaron Hernandez…it was so much. And if you’re not up to speed, right then…”

Taylor, then inferred that it was whoever was the “hot hand”, saying that “it doesn’t matter your status”.

That seemed to be the consensus by each of the players, but it was clear after that exchange that Johnson remains frustrated about how things went, which is too bad, because that season ended in a Super Bowl run where they could have used another play here or there to edge out the Giants.

4) Shifting gears, rumors continued to swirl on Monday about the future of quarterbacks around the NFL, and one that is quietly being discussed around the league is Ben Roethlisberger, with several outlets wondering what the future holds for the Steelers QB.

Jason LaCanfora believes that the Steelers and Roethlisberger are caught in an uncomfortable spot right now, with ownership concerned about the play of their 39-year-old quarterback, in addition to their current financial situation.  Roethlisberger is reportedly going to also need to give up a sizeable sum to stay, provided they even let him.

As LaCanfora points out, currently all the communication between them has largely been handled through the media, with the two sides not communicating directly.

LaCanfora writes that this, “tells me that some of what needs to be said will be uncomfortable, awkward, unlike anything these parties have been through with one another before.”

He wonders if the issue goes far beyond merely converting a chunk of Roethlisberger’s base salary into yet another signing bonus. As it stands currently, he’s not aware of what the plan will be but that he believes news may be coming “shortly”.

Roethlisberger’s not believed to be one of the possible candidates for the Patriots but there are obviously plenty of dominos that still need to fall first.  The thought of Roethlisberger in New England isn’t exactly appealing given how he looked at the end of the season.  Not to mention that if it reaches the point where they were out of better options, one would have to believe Newton would probably be the more likely option.

Either way, let’s hope it ends up being neither of these two players. 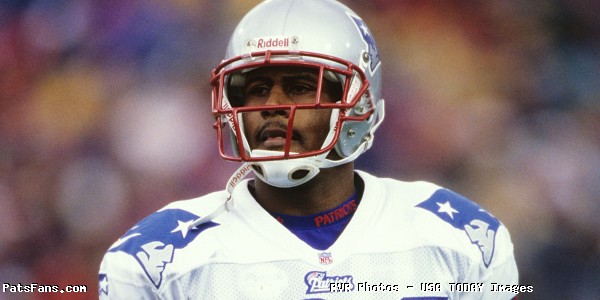 Players like Ty Law bought into what Bill Belichick was doing when he arrived in 2000.

5) One of the discussions recently has centered on how the Patriots might be able to lure free agents given the current state of the team. Jeff Howe was on 98.5 Monday morning and discussed a variety of things, but he addressed that concern and cited an example from way back in the early 2000s, which he pointed out was sort of a parallel of the two situations.

“I mean, I circled back to the early 2000s, which I know was a long time ago, but the reason I went that far back is because that was the last time you could really point to the Patriots not having…look, Tom Brady was great in 2001, but nobody really knew Tom Brady was going to become Tom Brady,” said Howe. “So after the 2000 season, Belichick got Roman Phifer to buy-in. And Roman Phifer was a damn good football player and an important piece of the early part of the dynasty. He was a key free agent.”

“The reason he was able to get Roman Phifer was because of the culture that they started in 2000. They got guys like Willie McGinest and Ty Law to buy-in. Those guys were telling their friends, Roman Phifer among them, ‘Hey, this is going to be a damn good team. Don’t look at this record just come on board and let’s see what we can do.’ And Belichick was a big part of that.”

Howe also talked about a couple of other key free agents, including Rodney Harrison and Roosevelt Colvin, neither of which initially wanted to play in New England.

“Roosevelt Colvin didn’t want to play for Belichick because of his perception of Bill Parcells. Belichick kept calling and calling, and calling and after Colvin went on two or three visits to other teams, Belichick finally got Colvin to relent and at least travel to Foxboro for a visit.  After meeting with him, he was like, you know what? I actually, I like this guy. I had a misconception about him.’ And it helps that the Patriots gave him the highest offer. So there are just three examples right there that I keep going back to.”

Meanwhile, between Marcus Mariota and Jimmy Garoppolo, Howe believes that Garoppolo is who he believes is the more likely choice as possible options at the quarterback position. Regardless of who they do get, Howe feels they’ll also have the money to surround them with some talent.

Howe also said that he believes the chances are low that the Patriots might potentially trade up into the top 10 and he believes that won’t happen. With free agency rapidly approaching, it will be interesting to see how that plays out since that will certainly affect what happens in April.