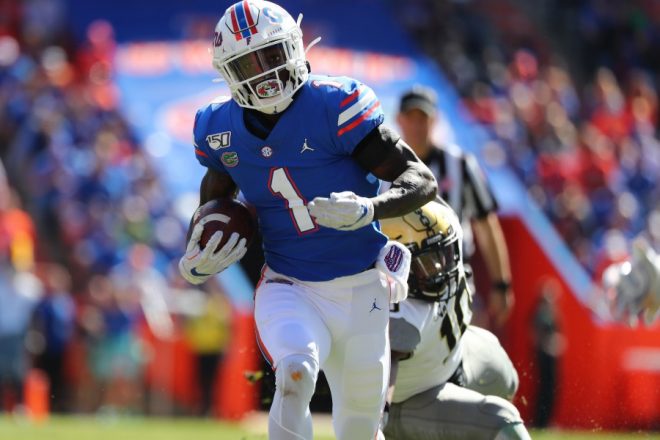 Kardarius Toney, Florida, was basically a gadget player for his first few seasons with the Gators but turned into a legitimate threat when paired with Kyle Trask in 2020. Toney put together a very good 2020 season with 70 catches, 984 yards with 10 TDs receiving. He added 19 rushes for 161 yards (8.5-yard average) with another TD.

Toney can play outside or in the slot, where it seems is his best fit. However, his outstanding agility and athleticism make him a threat in all three levels. His last three games in his college career were all big games. He caught 8 passes for 108 yards and a touchdown at Tennessee. He then added 9 catches for 182 yards and a score against LSU. And in the SEC Championship Game, he caught 8 passes for 153 yards and a TD against Alabama.

Toney is something that no Patriot receiver is…he’s dynamic with the ball in his hands. He has that rare explosion that few WRs have and he’s a threat anywhere he catches the ball. He has elite acceleration and is very agile.

He’s not a big guy at 5’11, 189 but his explosion, athleticism, and acceleration mean that defenses have to respect his speed. If a cornerback bites on a move, he’ll blow right by them and is a threat to go the distance.

His route running can use some improvement, but it is because they didn’t ask him to do much. He can be so much more in the NFL.

– Versatile, can line up all over the formation

– Can put defenders on skates with his agility

– Uses his body too much when catching contested passes

– Route tree can be polished

Yes, as he gets comfortable in the offense and the coaches find his best fits, he will turn into a true weapon.

None, there is no one on the roster with his athleticism

Good, Florida had him returning some kicks and punt returns.

Toney is a fun player to watch on the field, as he draws so much attention, even when he doesn’t have the ball. He can create separation and yards after the catch. I can envision the Patriots (if they select him) using him much in the same way that the Chiefs use Tyreek Hill, not that he has Hill’s top-end speed. Toney will probably test out in the 4.4 range during his Pro-Day, not that it is slow, but his agility and explosion will get him open all over the field.

He was electric during the week of practice at the Senior Bowl, turning in highlight-reel catches every day. He’s had some off-field issues earlier in his college career, so, his character needs to be checked out, but the last couple of seasons, we haven’t heard anything that would put up any red flags. He can struggle against tight man coverage, however, with his burst, if he gets separation he’ll be tough to bring down.

He would be the Patriots’ next great slot receiver with the versatility to move all over the field. And with the athleticism and joystick moves to make him a very dangerous wide receiver in space…he’s something the team desperately needs.

He can run slants, bubble screens, shallow crossers as well as deep routes. He has good hands. He’s isn’t a great run blocker but is willing and despite his somewhat undersized stature, he is capable to break tackles with a physical style of running.