2022 NFL playoffs: Schedule through the Super Bowl, including AFC and NFC matchups for Bengals-Chiefs and 49ers-Rams 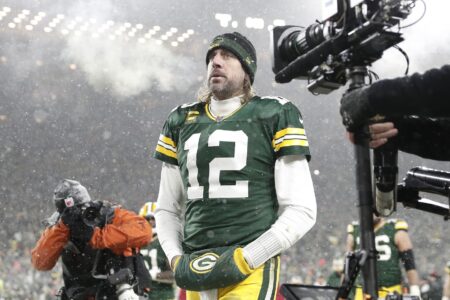 2021 Season:
5 Monday Patriots and NFL Thoughts After a Crazy Weekend
By: Ian Logue

It's truly the end of an era.

After 13 amazing seasons, Patriots linebacker Tedy Bruschi held a press conference on Monday where he told everyone he felt "fulfilled" with his accomplishments and announced that he has decided to call it a career.

The veteran linebacker told reporters that the reason he's made the decision is because there's nothing left that he feels he needs to accomplish, and wanted to instead make today a celebration of all of his great moments over the years that he's been a Patriot.

"Over my career I worked so hard to have this day be more of like a celebration," said Bruschi. "Because this would be so much harder for me if there was more that I wanted to accomplish, if there were any more goals that were left on the table. I think of everything that I ever wanted to achieve in this game, and I was able to achieve those goals."

"I spoke with a lot of my teammates yesterday individually on the phone to let them know what was happening today, and to know where I was in my career. The one word that I used, I found myself using this word with all of my teammates pretty much is 'Fulfilled'. Fulfilled with my career, fulfilled with all of the moments that I had. A feeling that, 'Man, I did everything I set out to do', it's a good feeling. To me this is a celebration today for my wife, for myself, for my family, for my sons who would rather have stayed home and played with their Transformers than come and sit in the front row. It's a celebration, I'm in a great place."

Bruschi's decision is a tough one to take for most fans, because he's a guy who is one of the last remaining players from the start of New England's rise to greatness. He was taken in the third round back in 1996 by then head coach Bill Parcells, who at the time had added Bill Belichick as defensive coordinator. Coming out of Arizona, Bruschi had played defensive end, but Belichick admitted that there were questions about what Bruschi's role would be in their defensive scheme.

After the draft Belichick said they weren't really sure what to do with Bruschi. They knew they were going to make him a linebacker, but they hadn't seen him (the all-time PAC 10 sack leader) do anything but rush the passer. They didn't feel he could succeed in that same role in the NFL.

Back then at just over 6-feet, 245-pounds, he was considered to be too small to play up front. However, they saw enough of him to feel like he could potentially become a solid linebacker in their system. Instead, Belichick said he became a player who transformed himself from a great college player, into a great NFL player.

"That's pretty unusual," said an emotional Belichick regarding Bruschi's transition into his new role. "It takes a pretty special guy to do that."

"Of course all along the way he heard, 'Too small, too slow, too this, too that', and just kept getting better and better, and working harder and outworking and outcompeting pretty much everybody that he faced. It didn't make any difference who it was. Faster backs, bigger lineman, big tackles, athletic tight ends, he found a way to compete and more importantly win in those competitive match-ups."

"I don't think I've ever seen a player do what he's done. To be as great of a college player as he was, and then to morph into a great professional player in so many different ways but still bringing the same qualities, it's truly special."

Belichick also said of Bruschi "I'd say he's the perfect player. He helped create a tradition here that we are all proud of."

You could definitely tell during today's press conference that there is a tremendous amount of mutual admiration between those two. Bruschi referred to him as "My Coach", saying "That's the way I refer to him".

"He turned me into a champion," said Bruschi of Belichick. "Yes I learned how to play linebacker, and I knew how to play. I mean (Bill) Parcells came in, (Pete) Carroll came in, but I didn't know how to win until Bill came here. He taught me how to win, he taught everybody in that locker room how to win, not to just go out there and play well. You can go out there and roll your helmet out there, and even though it has a Patriot logo on it, do you think they're gonna lay down? They're not. You still gotta play."

He then turned to Belichick and said, "Thank you so much for being who you are."

Bruschi has been a part of each of the five teams who have made it to the Super Bowl, and feels fortunate to have been a part of so many great seasons. His career includes 1,134 tackles, 30.5 sacks, 12 interceptions, and 4 touchdowns, and he has a winning record in 11 of 13 seasons. Under Belichick the team has missed the postseason just three times, with nine playoff appearances, eight division championships and five conference titles. Bruschi also holds the franchise record for most postseason games with 22.

That's an amazing amount of success that most teams don't even come close to achieving, which he emphasized that everyone in New England should definitely appreciate.

"I hope the people in New England realize who they have here," said Bruschi of Belichick. "He's that great, and I really felt it was a privilege to learn under him for all of these years."

The veteran didn't say what the future holds just yet. So far it included taking out the trash this morning before he came to the stadium, but he's not sure what else lies ahead. He did say that he and Belichick already had the discussion of the possibility of him being called back out of retirement should the team find themselves in tough shape in November due to injuries. However, it appears that the decision has been made and he doesn't plan on returning. Now it's time for him to focus on his family, and he'll take whatever opportunities come along off the field under consideration.

"This morning I woke up, and I put out the trash, for real," laughed Bruschi. "I'm ready to live life. I think that's just who I am. I'm just regular. Whatever comes, I'll listen to it. If I like it, 'yes'. If I don't, 'no'. I think that's just the way you have to handle things.

"But in the meantime I'm a 36-year old father of three, and I'm looking forward to playing that new role in my life."

When the players enter the stadium, there is a sign that includes the saying, 'Do your Job". Number 54 says his job is done -- and he's grateful for all the support the fans have given him over the years. From his start, to his stroke, to his amazing return back to the field, he said, "the fans took that journey with me" and he's enjoyed every moment.

Unfortunately all great players eventually decide when it's time to walk away. For Bruschi he leaves on his own terms, and the player known for his "Full Tilt, Full Time" work ethic can never have anyone tell him he didn't do things the right way.

"My job's done Bill," Bruschi said to his coach. "I'm looking forward to living the rest of my life."