Here’s a quick rundown of this morning’s news, although today’s entry focuses primarily on what went down Thursday night and how it relates to the Patriots.

1) The Browns had a busy night and finished with three picks in round one, grabbing two defensive players and a talented player on offense. After they appeared to be in the mix for Jimmy Garoppolo during this offseason, they bolstered their defense after they selected defensive end Myles Garrett with the first overall selection Thursday night. They also later grabbed safety Jabrill Peppers, and tight end David Njoku after trades with the Texans and Packers, respectively.

Mary Kay Cabot believes that following the trade by the Browns, Cleveland should be in the mix for Garoppolo next year.

#Browns now have plenty of ammo to trade for #Patriots QB Garoppolo. Have the 25th this year, 2 first-rounders next year and three 2's in 18

2) The Chiefs traded up with the Bills to grab quarterback Patrick Mahomes II with the 10th overall selection, which surprised plenty of people. That obviously creates an interesting situation in Kansas City with starter Alex Smith, who has been a great regular season quarterback but hasn’t been able to help the Chiefs take the next step in the postseason. While most analysts expect Mahomes II to red-shirt and develop behind Smith, the Chiefs moved up from 27th overall for a reason and this obviously doesn’t bode well for the veteran quarterback. As a result, it’s safe to say that will be a situation worth keeping an eye on as the Chiefs could be in the mix by the end of the season, and they’re also the team New England will open 2017 against.

Meanwhile, while the Bills received Kansas City’s 1st and 3rd round picks this year and the Chiefs 1st round pick next year to get Mahomes II, Buffalo oddly enough appeared comfortable enough to make that deal and give up the chance to draft him, instead opting to stick with incumbent Tyrod Taylor, Cardale Jones, Josh Woodrum and T.J. Yates heading into 2017.

3) The Jets selected safety Jamal Adams out of LSU with the 6th overall selection, with the Patriots rival continuing to try and improve their defense. The most curious part of that selection is that they passed on the opportunity to grab quarterback Deshaun Watson, who fell far enough to allow Houston to trade up and take him six picks later at 12. That position continues to be a question mark with Josh McCown, Christian Hackenberg and Bryce Petty as the current options sitting on that roster and as nice as the Adams pick might be, Jets fans probably won’t be happy if Watson goes on to do well.

4) The Saints, who were part of potential Malcolm Butler talks and seemingly seemed poised to add him to their roster, used the #11 selection they refused to give up on defensive back Marshon Lattimore. That likely takes them out of the mix for Butler, who is looking more and more like he’ll be back in New England in 2017.

5) The Texans traded up with Cleveland to try and solve their QB situation by drafting Deshaun Watson. We already mentioned Watson above, but what’s interesting here is the fact that if Watson pans out to become a legitimate player, the Texans have been a quarterback away from being a contender for a while now and his addition could be the start of Houston becoming a team the Patriots may continue having to deal with knocking out of the playoffs each year. We’ll see if Watson starts making that harder.

In Houston, they were pretty happy about the move:

6) The Ravens grabbed cornerback Marlon Humphrey out of Alabama with the 16th overall selection. The selection of Humphrey adds a talented cornerback to their secondary, which seemed to surprise some in Baltimore given some of the other players who were still available. For a Baltimore team that prides itself on its defense, the addition of Humphrey will be one to watch for a team that finished 8-8 and was a non-factor in the AFC in 2016.

7) Denver grabbed an offensive tackle with the 20th overall pick, taking Garett Boles out of Utah. Adding talent on the offensive line is always a smart move and Andrew Mason out of Denver pointed out that John Elway hinted a few days earlier that there could possibly be a Day 1 starter at tackle in the draft, and they grabbed one in Bolles. Bolles’ moment was a memorable one, with the rookie bringing his baby with him to the stage to accept the honor. “He’s been the best thing that’s happened to me in the last four months,” said Bolles of his baby, adding being drafted “is the second best,” as he talked to Deion Sanders afterwards.

8) The Dolphins selected Charles Harris with the 22nd overall pick, adding the defensive end out of Missouri to an already tough Miami defense. Obviously he’s a player we’ll get a good look at since New England sees them twice a year, and he’s already sounding pretty confident. He called it “a blessing” to be picked by the Dolphins, and that, “I’m going to come to the league and I’m going to dominate.” Needless to say, add him potentially to the list of players the Patriots might need to account for this season.

9) Oakland surprised everyone with the 24th overall pick, taking Gareon Conley, who is the cornerback facing questions regarding a sexual assault allegations. The former standout from Ohio State was named as a suspect in an eight-page Cleveland police report released earlier this week, which likely played a part in his slide into the latter part of the first round. He’s denied the allegations, calling them, “completely false.” Either way, it didn’t bother Oakland, who went ahead and added the cornerback to their secondary.

10) The Bills selected LSU cornerback Tre’Davious White with the No. 27 pick Thursday night, adding a defensive back to their defense after having lost Stephon Gilmore to free agency to the Patriots. He had 34 career pass break-ups during his time at LSU and he’s another talented player who we’ll likely get a good look at in the coming years.

11) Pittsburgh opted to draft linebacker T.J. Watt with the 30th overall pick, which was a great addition to their defense. While the Steelers are a team that New England tends to cross paths with in the postseason, Mike Tomlin continues to seemingly be the weak link in that match-up and fortunately for the Patriots, Bill Belichick tends to be the X-Factor in that match-up who helps to solve any match-up issues between the two clubs. As a result, while Watt will improve his new team, one would have to believe Belichick will come up with something to stop him, much in the same way he’s done with Houston against his brother.

12) New Orleans used the 32nd overall pick they acquired from New England on Wisconsin offensive lineman Ryan Ramczyk, who will add some depth in front of veteran quarterback Drew Brees. There was a lot of discussion about whether or not Butler could have been in the mix for a deal after signing his tender to recoup that selection, and give Belichick credit for not going in that direction. 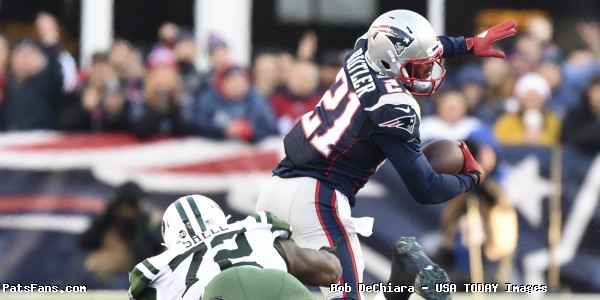 Malcolm Butler is still here after round one of the NFL Draft.


It was definitely an interesting night as the theme of the evening within the division appeared to be adding defensive talent to try and slow down the best quarterback and offensive group in the game after the Jets (Safety – Jamaal Adam), Dolphins (Defensive End –
Charles Harris) and Bills (Cornerback – Charles Harris) all went in that direction.
We’ll finally see New England make their first selection tomorrow as they’re currently slated to make their first pick with the 72nd overall selection.

As we posted yesterday, barring any trades, here’s the list of selections they have this year.

NFL Spokesperson Takes Exception to Boos – Nearly 70,000 fans turned out for the draft Thursday night in Philadelphia, with a sea of people clearly visible on television who are on hand for the event being held in their city.

To no surprise, those who were there did their part in booing Roger Goodell as often as possible as the commissioner came out and announced each selection.

NFL Spokesperson Greg Aiello obviously took exception to that, pointing out that the commissioner is the reason the draft was being held there.

If those 70,000+ great fans in Philly like the Draft being there, they should cheer Roger Goodell. He's the reason the Draft is on the road.

One thing Aiello might not have noticed is Goodell gets booed everywhere, so there really wasn’t anything that unusual about what happened Thursday night and try as he might, there’s definitely little he can do to stop them.

Brady wished players luck Thursday night – As a player who was taken 199th overall, Tom Brady knows all too well that the so called “experts” don’t know every attribute of every player.

That was something Brady emphasized via his Instagram account Thursday night, pointing out that scouts might look at all the measurables, but they don’t always realize the heart of the player they’re evaluating.

Remember: they can't measure heart. Whether you're picked first, last or not at all, YOU decide what happens next, every day. Good luck!!!

Good stuff from Brady, who has proven more than anyone that heart sometimes beats out all those things and that one quality alone can be the difference in helping make a player emerge into who no one else believed they could become.