Considered by many as the best of all time at the position, Moss spent 14 years torturing opponents secondaries to a tune of 982 career receptions for 15,292 yards and 156 touchdowns.

During his New England Patriots tenure, Moss set the NFL record for most touchdown catches in a season with 23 in 2007.

Following retirement in 2012, Moss was inducted to the Pro Football Hall of Fame as a member of the 2018 class.

“One of the smartest players I’ve ever coached. Certainly the smartest receiver,” Patriots Head Coach Bill Belichick said of Moss in 2019 during the NFL All Time Team television special. “He taught me more about receiving and the passing game than by far anybody else.”

Check out some of the best social media postings celebrating Moss’ career and birthday wishes by former teammates below. 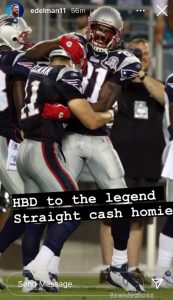