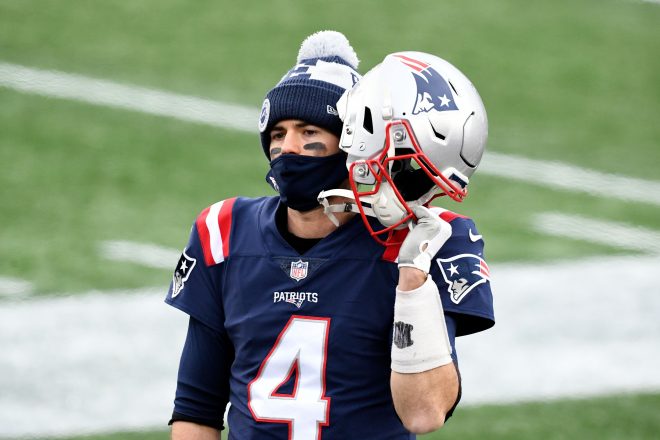 Anyone who watched Tom Brady go out and do Tom Brady-esque things on Sunday night woke up Monday morning with one sobering thought.

The Patriots still need a quarterback heading into 2021.

That’s a situation which on the surface doesn’t seem quite as bad as it really is.  However, finding smart, poised players who can play that position and rise to the occasion on the biggest stage is obviously much tougher than it looks.  You can sometimes get lucky and find guys who will get you to January.  But getting to February and then completing the job is a completely different story.

After all, even Kansas City Chiefs QB Patrick Mahomes struggled Sunday night.   While the Buccaneers defense did a good job putting pressure on him, Mahomes looked rattled and wasn’t anywhere near as poised as he’s normally been.  He had a hard time finding guys open and even admitted after the game that he and his players just couldn’t get on the same page.

Meanwhile, Sunday night’s win for Brady looked fairly effortless as he navigated the offense in and out of plays and aside from one sack, the ball was out of his hands long before the defense got there.  Better yet, he kept the pressure on to the point where he made the Chiefs pay for leaving just under a minute left on the clock in the first half after they kicked a field goal. He went in for the kill and wasted no time taking them down the field and scoring a touchdown before they went into the locker room.

From there, the rout was on.

Back in New England, we viewed it as business as usual.  But then again, we had the luxury of watching him do it for over 20-years and didn’t have to deal with the frustrations that the rest of the league has been forced to deal with.

The bad news is, we lived through it this past season after Brady headed south and the team eventually took a shot at former NFL MVP, Cam Newton. That obviously turned out to be a disaster after Newton struggled and despite weeks of positive rhetoric, never got himself right.  At this point, most fans have written that off but considering that Jarrett Stidham potentially no longer appears to be a viable answer and Brian Hoyer remains a great teammate and scout team player but a mess as a starter, they essentially have a massive void heading into next season.

You can’t get to the postseason, let alone win, without a serviceable quarterback.  It’s been said here previously, but that’s what makes 2020 so maddening is that the Newton disaster set the Patriots back and caused it to essentially be a lost season.

To make matters worse, while no one has officially come out and said it yet, the only thing it taught us is that Newton won the battle of mental toughness after his signing seemingly affected Stidham bad enough where his stock plummeted.  Considering everything we heard last offseason about how confident the team had appeared to be with him potentially as a starter, it still remains fairly stunning to see how things ultimately played out.

The third-year quarterback’s wife has hinted on social media at the struggle that the season had been for him, which is unfortunate but it clearly shows the stark contrast between Stidham and a player like Brady.  Brady came in and immediately set his sights on the starting job against a player like Drew Bledsoe, who was fully entrenched and even signed a $100-million deal heading into the former Michigan standout’s second season.

That contract would have likely caused any other player to put it in neutral and glide through the season.  Instead, Brady continued outworking him and ultimately took the job. 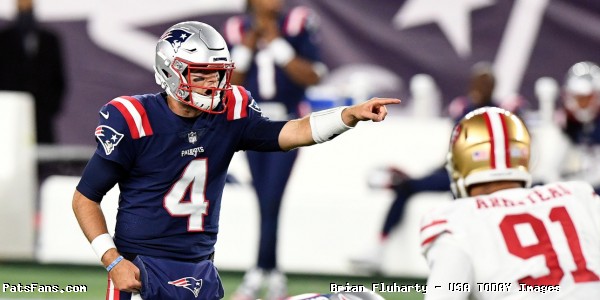 NBC Sports Boston’s Tom Curran has covered this fairly closely, pointing out that Stidham never showed that type of fire and has instead remained an inconsistent player who turns the football over in practice and has already done the same in his limited time on the field.  He was spotted recently working this offseason in preparation for 2021, but the bigger question may be whether or not Bill Belichick has seen enough and is willing to stick with a player who crumbled at the first sign of adversity after Newton’s addition.

That being said, it remains a position of need.  We’ve already seen a couple of dominoes fall after Matthew Stafford and Jared Goff swapped teams in the first major trade of the offseason, while Deshaun Watson, Derek Carr and Carson Wentz are all players who have been discussed as possible trade options by their respective clubs.

Watson has already made it clear he wants out of Houston, but new GM, Nick Caserio, said they have no intention of moving him.  Carr’s name has come up as the Raiders appear interested in moving him to acquire the draft capital to try and change Caserio’s mind, while the Eagles appear to be shopping Wentz and the Patriots have been reported as being among the teams who might be interested.  The only problem seems to be the Eagles plan on being greedy and if they do, indeed, decide to part with Wentz, it looks like they’ll be looking for a significant amount to let him go.

With that in mind, any deal that involves multiple first-round selections and a high price tag likely takes New England out of the mix for any of those players.  Wentz seems like the most possible option, but not if Philadelphia shoots for the moon for a player they’ve already given up on.

The Patriots have also reportedly looked into acquiring Carr’s backup, Marcus Mariota. If Gruden is looking to build up his draft stock, moving Mariota would certainly allow him to do so and it would at least give the Patriots a stable option. If he can make the same turnaround as his former teammate, Ryan Tannehill, it would give New England an experienced veteran and a player who is fairly athletic. He showed promising flashes at the end of last season and it would be interesting to see what he could do in this offense.

One other name that potentially remains an option could be former quarterback Jimmy Garoppolo, who one year removed from a near Super Bowl win appears to have fallen out of favor in San Francisco.  The 49ers recently added Josh Rosen and they appear to be exploring their own options heading into 2021.  Belichick and Kyle Shanahan have a good relationship, so it’s not out of the possibility that a deal could get done to send him back to the East Coast.  A reunion at this stage would be a major win for Belichick, who everyone knows was high on the former Eastern Illinois QB.

If San Francisco stays the course, the next option would be for New England to go the path of the draft and potentially take Alabama’s Mac Jones at #15.  The only issue they might have is Jones had a decent showing recently heading into the Senior Bowl before an ankle injury sidelined him.  However, enough teams seem to have caught on and that could see his stock rise, which could be bad news.  As it is, some mock drafts have even seen Washington make a deal to jump ahead of the Patriots and snag Jones at #14.  That would be tough to swallow, especially if the other top QBs are gone by the time New England makes their pick.

Getting back to potential free agents, another possibility could be Mitchell Trubisky, who appears to be on his way out of Chicago and will be a free agent this offseason.  Trubisky has been the epitome of inconsistency during his tenure with the Bears and that might lower his asking price enough to put him in range for Josh McDaniels to begin a reclamation project.  The former first-round pick has shown flashes during his NFL career, but just hasn’t quite been able to get things turned around.  A change of scenery would probably help him, but anyone who honestly believes he could be what gets the Patriots back on a path to greatness is definitely quite an optimist.

Either way, there’s no answer that seems definitive at this point and New England faces an uphill battle in fixing a position that everyone else in the league is also focused on this offseason.  But after watching their former starter be the difference-maker in making the Buccaneers a Super Bowl champion, the Patriots have to know that getting it right this time in the coming months will be critical if they ever hope to get back to that level.