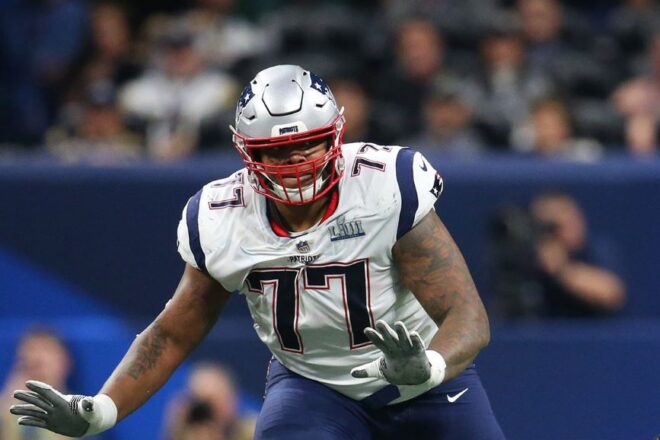 As Atlanta Falcons wide receiver Julio Jones’ name continues to swirl in trade rumors this offseason, New England Patriots tackle Trent Brown is doing his best on social media to try and get the All-Pro wide receiver to Foxboro.

On Monday, Brown sent out the following tweet, tagging Jones in his message.

Jones reportedly requested a trade from the Falcons back in March and the Patriots have had “internal discussions” in attempting to acquire him this offseason since that time.

“You know who (Jones) really wants to play with? … He wants to play with Cam Newton. He likes Cam,” Holley said. “That’s the other thing: He thinks (Falcons quarterback) Matt Ryan has lost a little zing on his deep ball.”

The trade rumors would then reach a high point on Monday when Jones called into the FOX Sports “Undisputed” program and told Shannon Sharpe “I’m out of there”.

Presently the Patriots rank tenth in the league with $20.2 million remaining in cap space where they could swing a deal, but as for now, the rumors and recruiting roll on.

By: Robert Alvarez
Check out the Patriots mini-documentary highlighting Richard Seymour's football journey to becoming a Hall of Fame player.
1 day ago
wpDiscuz