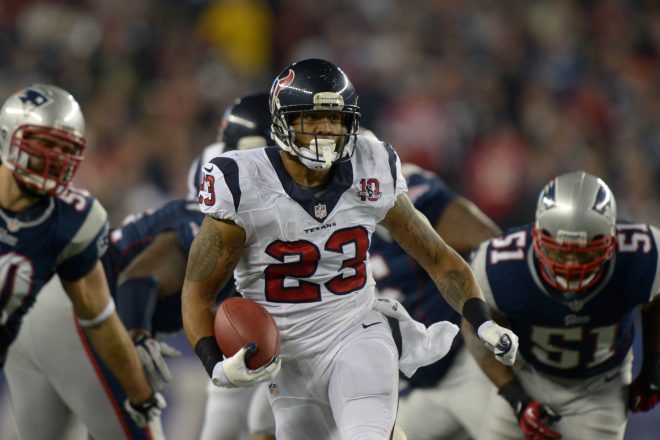 The NFL Draft came and went without the Patriots addressing the running back position, which is arguably one that is dangerously thin and hardly settled heading into the start of training camp just over a month from now.

Obviously the question is still, how can that be?  With Dion Lewis coming off of knee surgery and LeGarrette Blount returning from a hip injury that ended his season in 2015, the Patriots obviously have more questions than answers at a spot where they need help in order to try and keep opposing defenses from simply teeing off on Tom Brady.

One would have to think that head coach Bill Belichick and New England’s front office must have someone in mind to add to their backfield, although to this point there has yet to be an obvious answer to whatever master plan is being concocted in Foxboro.

However, there was an interesting turn of events on Thursday after free agent running back Arian Foster was apparently spotted in Boston, with one fan pointing out his presence via Twitter.

Aside from that Tweet, there’s not much to go on and for a guy who took a selfie, there were no further Tweets following up on whether or not he broached the subject of Foster playing for the Patriots, what brought the free agent running back to New England, nothing.  Not that Foster would potentially reveal anything, but any insight into his visit would at least give people a little more to go on other than the speculation we’re left with.

Foster is obviously a talented back and at the age of 29 should still have a little tread left on his tires.  He’s coming off of a year where he tore his Achilles in Week 6 so he didn’t absorb much wear and tear last season thanks to the injury.  The bigger question now would be whether or not he’s healthy enough to be dangerous and if he still has the same burst and quickness to make him an effective running back.  That’s clearly something he’d have to prove in order to end up here.

Having played for the Texans and head coach Bill O’Brien, there’s obviously enough of a connection there for O’Brien to provide Belichick with any insight to Foster’s health to make the decision to have him in for a visit.  Without knowing why he was here, it’s tough to read too much into that.

But if that Tweet is in fact accurate and he was in town, it’s interesting to think about what type of impact he could make on this offense if he’s able to get back to close to where he was prior to the injury.  Maybe he’s the reason the Patriots didn’t take a running back, and maybe he’s been on Belichick’s radar this whole time and he’s the reason there haven’t really been any other serious moves to address the position.

Or maybe Foster’s just here to check out Roger Goodell’s house in Maine.  Either way, that Tweet will certainly have people talking and stirred things up a bit on an otherwise quiet Thursday afternoon.

UPDATE: Ian Rapoport of NFL Network says Foster is in town, but not to visit the Patriots:

@jburke616 Arian Foster is in town, but not to visit the Patriots