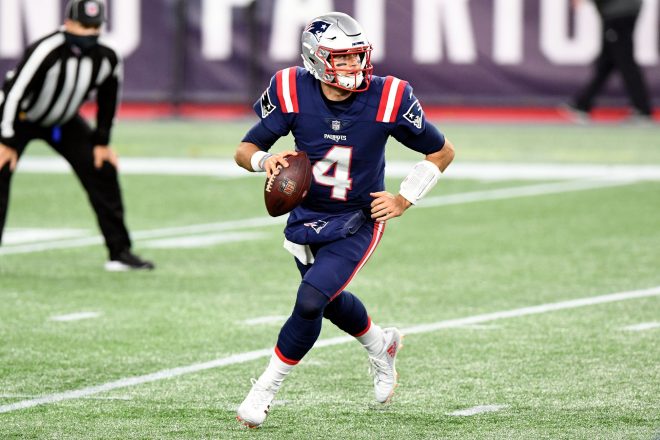 If ever there was a player who needed to get back to the drawing board, it’s former 4th-round pick, Jarrett Stidham.

Stidham ended up on a wild ride last season, with his stock at an all-time high after New England came out of the NFL Draft without a quarterback, which left many believing that it appeared to be Stidham’s job to lose heading into the 2020 training camp.

Instead, the Patriots called a last-minute audible and signed Cam Newton in a deal that came together at the end of June, nearly a month before the start of the preseason.

That derailed Stidham’s potential ascension and seemingly put that opportunity on hold.

From there, everyone knows how last season unfolded and ultimately how it finished.  Stidham came in on the right and wrong end of a few blowouts, while Newton guided them to an uneven and frustrating 7-9 record.  Over that span, according to reports, Stidham didn’t fight hard enough and struggled to the point where the coaches clearly lost confidence in him and refused to start him, even long after the club was out of playoff contention.

With Newton now in the rearview, the Patriots find themselves back at the beginning and it appears Stidham is starting over also.  He was recently spotted working out in California, with photos on his Instagram account showing him working with Jordan Palmer, trying to put himself back in a position to possibly convince New England not to give up on him just yet.

The former standout from Auburn had a rough year in 2020, completing 22-of-44 (50%) for 256-yards along with two touchdowns and three interceptions during his limited snaps.

Give him credit for putting in the work and trying to get himself back in the position to compete for a starting role.  But after not seizing the opportunity last season and leaving coaches disappointed, the chance to take the reigns will only be there if Stidham steps up and outperforms whoever New England opts to bring in this offseason.

After all, we’ve seen it done once before.  But whether or not Stidham is up for the challenge given how last season went for him remains to be seen.