2 years ago at 11:47 am ET
Follow @IanLogue
Posted Under: Patriots Rumors 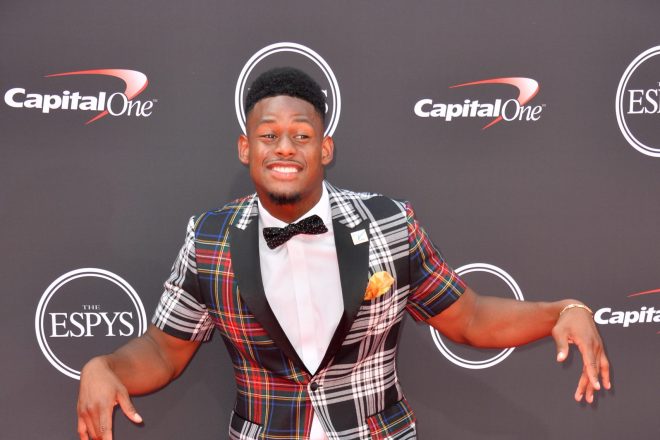 Tom Curran recently said in an interview on WEEI that he’s heard the Patriots plan on being “extremely and uncharacteristically aggressive in this offseason”, which would lead you to believe they’ll make some big splashes to get back in position to be contenders again.

They’ve got their work cut out for them, especially considering they don’t have a quarterback and they’re still in need of skill position players in this offense.

That’s going to be one of the biggest challenges this offseason as they try and potentially lure free agents.  While some obviously want to get paid what they believe they’re worth, others also want to go to teams with the best chance to win.

Out in Pittsburgh, wide receiver JuJu Smith-Schuster will be a free agent this offseason and he’s an attractive option for a team like the Patriots, who could use someone of his caliber to build around.

The problem is, judging by Smith-Shuster’s comments, it sounds like the Patriots might not fit the mold of what he’s looking for.

“I’m always about winning,” Smith-Schuster told FOX Sports Radio via BehindTheSteelCurtain.com. “I want to be on a team that is fighting and competing for the playoffs every year. As far as the business side and the money, I want to be paid for what I am worth. Obviously for what I do for the team particularly.”

That’s where things are going to be tough.  The Patriots typically don’t pay top-dollar for a player, and with Tom Brady no longer with the team, the promise of competing for the postseason might also be tough to sell until New England comes up with a solution at quarterback.

Smith-Schuster’s acquisition would certainly change things.  He would essentially create a domino effect because bringing him in would potentially set up better match-ups for a player like Jakobi Meyers, who could find himself matched up one-on-one against lesser defensive backs as teams are forced to account for where Smith-Schuster is on the field.

If you bring in that type of talent and it increases production in another, that’s certainly a move worth making.  The 24-year old receiver has been terrific for the Steelers. He started all 16 games last season and finished with a career-high 97 receptions with 831-yards receiving and 9 touchdowns.

For a team looking to revamp its roster, especially at his young age, he’s certainly the type of building block that you’d love to add. Not to mention that they need to start looking forward with Julian Edelman’s future in doubt and the fact they need a playmaker to make Meyers and N’Keal Harry more productive.

He’s definitely a game-changer and someone New England will likely do some due-diligence this offseason. Everyone knows Belichick loves to win, but whether or not he can convince Smith-Schuster to accept a deal to help put them both in a position to contend every season is another story.

📺@GottliebShow: "Juju, since the season has ended, have you spoken with Ben (Roethlisberger)?

📺@TeamJuJu: "I have not talked to Ben…since the last game."