2 years ago at 10:53 am ET
Follow @IanLogue
Posted Under: NFL Rumors 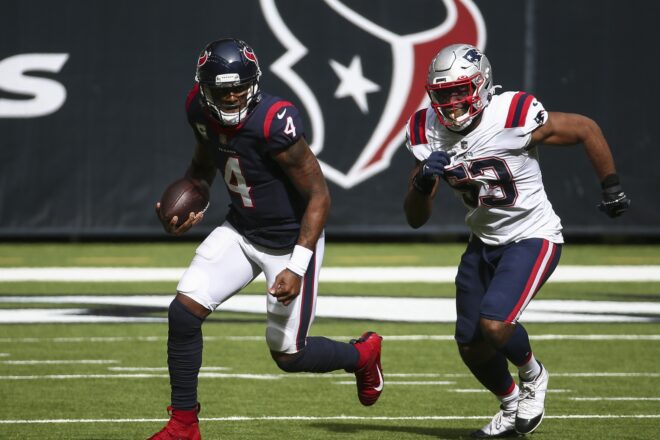 Out in Houston, it sounds like they may potentially be among teams in the NFL with a new quarterback next season.

Newly hired GM Nick Caserio has made it clear that the Texans have no plans in moving Deshaun Watson, with the goal to put personnel around him to finally give him a championship-caliber team.

That’s the commitment Caserio has made to Watson, but that only works if the quarterback plans on being there.

According to NBC Sports’ Chris Simms, the 25-year old has already made up his mind about his future.  Watson apparently has no intention of suiting up there again and may sit out the year if they don’t move him.

Simms said on Pro Football Talk that he’s heard that Watson plans on forcing a trade and as far as he’s concerned, it’s over.

“There’s no way that Deshaun Watson will play for the Houston Texans again,” said Simms via NJ.com. “I have been told by somebody that I trust that says Deshaun Watson will not play for the Houston Texans ever again, and he’s willing to sit out football for the year if he has to.  That’s where I’ve been led to understand this situation and where it’s at right now, and like I said, it’s someone that I trust very much.”

The Watson situation remains one to keep an eye on here in New England.  While it’s unlikely that the Patriots would be able to offer up enough to bring him here, he may still affect things in the event Houston does finally move him and sends him out of the conference to somewhere like San Francisco.  That would potentially give the 49ers a reason to part with Jimmy Garoppolo, which would open up the door for Bill Belichick to bring him back to Foxboro.

It remains an interesting story to follow, but it’s sounding more and more like Watson may join a group of quarterbacks who might be starting somewhere else in 2021.