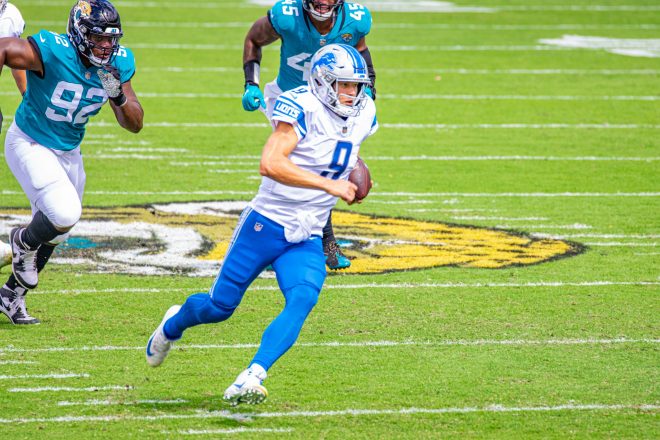 For any Patriots fans who were hoping Matt Stafford would have landed in New England, it appears that even despite being traded to Los Angeles, the possibility was never there anyway.

According to NBC Sports Boston’s Tom Curran, New England was the only place he wasn’t willing to go.

That news speaks volumes in regards to his feelings about Matt Patricia, to who Stafford appears to harbor some ill-feelings.  Patricia recently rejoined Bill Belichick in New England after having been fired by the Lions earlier this season.

Detroit reached an agreement Saturday night to send Stafford to the Rams in exchange for draft picks and Los Angeles quarterback, Jared Goff.  It was a surprising move and gives both players a fresh start in their respective cities.

For anyone who might be disappointed that Stafford won’t be playing for the Patriots, don’t be too sad.  Lions fans can tell you first hand about quite a few last-second frustrating losses and untimely second-half turnovers, which has become an all-too-frequent occurrence for a player who simply hasn’t lived up to his potential.

As for the Rams, they appear pretty excited, with the trade putting them with the third-best odds behind just the Chiefs and Buccaneers to win the Super Bowl next season.

But for that to happen, that begs the question whether or not Stafford can step up in big moments.  History certainly hasn’t shown that to be the case and given Stafford’s previous postseason showings (0-3 in the playoffs), they’re putting a lot of faith in a player who has never been able to make a significant playoff run, let alone win it all.

Maybe a change of scenery will do the trick.  Or maybe Rams fans will simply get a first-hand look at what Lions fans have had to watch during Stafford’s frustrating NFL career.