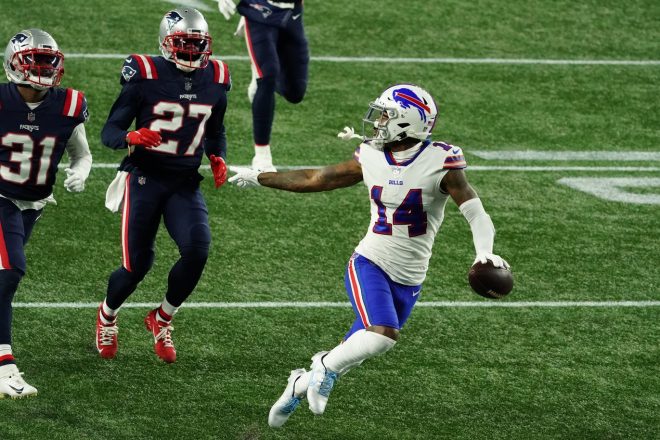 Three things cannot be long hidden: the sun, the moon, and the truth.

The Patriots weren’t just beaten on Monday Night Football against Buffalo, they were hammered, dominated, and looked like the substandard team they’ve been all season.

Let’s just face facts here, this isn’t even close to being a good football team, and despite the head coach, the 2020 New England Patriots are a shell of what they’ve been in years past…and that is the truth.

Buffalo has been building a very good football team for the past few years, and on MNF, they showed their nemesis what it feels like to get hammered on national television, something the Patriots did to them many times in the past two decades.

So, here are our grades this week for the Patriots-Bills game.

Cam Newton is a good, no a great teammate, he’s been excellent in the locker room and he’s been 100 percent accountable. But he has been absolutely terrible for much of the season. And on MNF, it was more of the same.  Newton was 5-10 for just 34 yards. That’s horrible for even the dead-ball era of 4 yards and a cloud of dust in the NFL’s infancy. Was it all his fault that the Patriots lost? Not even close. As strange as it may sound, he wasn’t the worst of their issues against the Bills.

On Josh McDaniels trick play call, the Bills were totally faked out and Newton actually delivered the ball perfectly to Damiere Byrd. So well, that it hit Byrd in the face… but he didn’t catch it, a fact that many on social media placed on Newton. Not that time. He ran pretty well and had an impressive 9-yard touchdown run, the Patriots’ first and only score in three games.

The running game was led once again by Sony Michel who gained 69 yards on just ten carries, including a couple of big gainers. On the Patriots’ first drive, Michel ripped off a nice 29-yard run. On their only TD drive, Michel had a 21-yard run followed by J.J. Taylor’s 28-yard run. James White and Newton also chipped in. As a team, the Patriots ran for 145 yards and averaged over six yards per carry. This was with the Bills knowing the Patriots would try to and could only run. Nothing in the Patriots’ offensive struggles can be pointed at the RBs. Jakob Johnson had a solid game blocking.

Okay, we just slammed the QB play, which was awful, and the WRs can’t be expected to catch passes that skip 2-3 yards in front of them. But six catches for 55 yards? That’s just awful.  Jakoby Meyers had just four catches for 45, including a 22-yarder, which puts him at the top of the class.

Byrd has been showing a troubling penchant for drops in recent weeks and when the offense is struggling to throw the ball so badly and your QB delivers a would-be TD pass, you absolutely, have to catch it. Harry was the target on a pair of skipped throws and had one catch for three yards…fantastic.

O stands for 0 (zero), no scores, first downs, or even catches. The tight end position, a disaster in 2019, has gotten appreciably worse in 2020.

The anticipation and confidence of seeing the two rookies on the field is gone, at least for this season and they’ve contributed nothing to the offense. Devin Asiasi was targeted twice and had one go right through his hands. And his chip on a blitzing safety didn’t slow the player at all and Newton was sacked. Ugly.

The offensive line did a good job of opening holes for the backs to run effectively against a very good and aggressive Bills defense. Justin Herron, filling in at left tackle was good in the running game. David Andrews played through a calf injury but was later replaced by James Ferentz. After the Bills began to roll offensively, they pinned their ears back on defense and got after Newton and Stidham. The issues offensively were not the fault of the OL (like the running backs).

The defensive line was part of the defensive manhandling by the Bills’ offense. The Bills could do whatever they wanted offensively and knew it. Two out of the three fourth-down conversions that the Bills converted were on the defense.

Although the damage was done by Allen through the air, the Bills also ran for 130 yards and averaged 4.7 yards per carry. Adam Butler had two offsides penalties, the second of which wiped out a J.C. Jackson interception. The Patriots didn’t sack Allen once and got zero QB hits on him as well. That is awful.

Terez Hall got some love on television for crashing down in run support on some plays with some big hits, but he whiffed on a goalline play with Zach Moss scoring from five yards out. John Simon and Chase Winovich both moments when they were washed out. Anfernee Jennings wasn’t a factor and Josh Uche was hurt in the game.

The Patriots’ secondary was missing Stephon Gilmore, but Josh Allen carved them up, passing for 320 yards completing 27-36 with four touchdowns and 0 interceptions. His passer rating was a whopping 138.7.

J.C. Jackson was matched up with Stefon Diggs and was talking a lot of smack early. But Diggs ended up with nine catches for 145 yards with a career-high three TDs, and Jackson ended up on the bench for Joejuan Williams. Jackson was burned for a 50-yard TD catch and run. And he and Jonathan Jones both failed to tackle Diggs at the five-yard line. Jackson, who many peg to be the #1 corner next season, and is a restricted free agent, didn’t do his checkbook any favors once again in Gilmore’s absence.

Lee Smith the behemoth blocking tight end caught two passes for 31 yards including a four-yard touchdown. The Bills were passing at will all over the field. Bills passers completed 30 passes to 10 different receivers.

The bright spot for this unit was Jake Bailey whose net punting average for seven punts was 48.1 yards. Nick Folk kept his field goal streak alive but missed an extra point. Donte Moncrief had a decent return to begin the game but had another one that only went to the 10-yard line.

The coverage units allowed a 49-yard return by Andre Roberts. Worse was the fourth-down conversion where the Patriots tried to show punt block and they left the gunner all alone. Buffalo recognized it and completed an easy pass and first down. Even Matthew Slater had a penalty.

The Patriots coaching staff seemed to have a good game plan to beat the Bills, but that game plan wasn’t executed very well at all. Even if Josh McDaniels’ trick play had worked, would that have spurred the team on to playing better for the rest of the game? That is doubtful at best. The defense was gashed badly, all game long. Again, the calls seemed to be there, but the execution was lacking…but that is a coaching issue too.

Ernie Adams called down with a bad challenge on a Dawson Knox catch on the Patriots sideline. The replay cleared showed a good catch which prompted Bill Belichick to launch the phone in a pique of anger. It was that kind of night and season

We’re on to the suddenly hot New York Jets for the season finale.