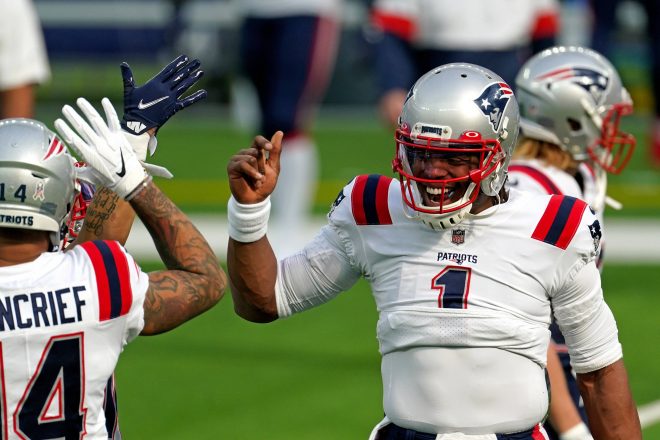 The Patriots began their west coast swing on Sunday against the 3-8 Los Angeles Chargers looking to return to .500 on the season for the first time since week four.

The matchup marked the first meeting between the two franchises for the first time since the 2018 AFC Divisional round in Foxboro.

Take a look at all the best sights and sounds from social media throughout the game below.

In the first quarter, the Patriots scored on their first possession of the contest and an early lead thanks to a Cam Newton dive into the end zone at the goal line. 7-0 Patriots after a quarter of play.

SUPERMAN! Cam Newton dives into the end zone to give the #Patriots a early lead! pic.twitter.com/qbeFbhEYJa

In the second quarter, Gunner Olszewski got his revenge after having a previous punt return called back on a penalty last week.

Olszewski ran this punt back 70 yards for his first career NFL touchdown and a 14-0 Patriots lead early in the second quarter.

When you see the end zone waiting for you. pic.twitter.com/YnQtU5hXAp

Meanwhile on defense, the Patriots shut down Chargers rookie quarterback Justin Herbert thanks to plays like this one by Josh Uche.

The following drive saw the Patriots push their lead to three touchdowns.

A Cam Newton two-yard rushing score gave the Patriots a 21-0 lead midway through the second quarter.

.@CameronNewton would not be denied.

With the clock winding down on the first half, the Chargers attempted their to get their first points of the game on a 58-yard field goal attempt.

Instead the Patriots special teams unit again punished the Chargers.

"I knew today, I was going to score."

"My cause, my cleats representing the tears organization for child loss. Just knowing my wife would be back home watching… I knew I'd find a way to get into the endzone so she could see it and the rest of my kids would see that."@ABC6 pic.twitter.com/iXLEmdYPtl

Devin McCourty hit 21.11 MPH on that touchdown return, per @NextGenStats. He's the third-fastest ball-carrier of the week so far.

In the third quarter the Patriots defense kept pouring it on as Chase Winovich logged his first career interception.

The turnover set the Patriots offense up to score once again as Cam Newton would later find N’Keal Harry for six and an unprecedented 35-0 lead in Southern California.

📹 @CameronNewton VERY happy for @NkealHarry15 after connecting for a touchdown pass in #Patriots 45-0 win over the Chargers #WBZ pic.twitter.com/Mn8AU1fQue

J.C. Jackson has 15 interceptions in his first three NFL seasons and there are still four games left this year.

In the fourth quarter, Gunner Olszewski continued his career day as the Chargers special teams unit continued to struggle on all phases.

With the game well out of reach, Jarrett Stidham took over for Newton but the points kept coming for the Patriots.

A Nick Folk 32 yard field goal and a Gunner Olszewski 38 touchdown pass from Stidham put the icing on the victory cake for the Patriots dominating blowout victory.

Gunner Olszewski is the first Patriots player to have a Rec TD and punt return TD in the same game since Julian Edelman in 2014.

The only other player to do that this season is Keelan Cole in Week 10 at the Packers. pic.twitter.com/XYR1RPi1X2

Cam Newton pumped up and happy for Stidham after the nice TD pass to Gunner. It’s impossible not to like the 2020 Patriots pic.twitter.com/LqSRPtwcPj

The Patriots would return to .500 (6-6) in 2020 as they prepare to move on quickly as a Super Bowl rematch with the Los Angeles Rams looms on Thursday night, also at Sofi Stadium.

Patriots closed as 1.5 point underdogs. They become just the third underdog in NFL history to win by at least 45 points pic.twitter.com/bGFt6rWQ24

From @ESPNStatsInfo: 45-0 is the 2nd-largest shutout win in Patriots history, trailing only their 59-0 win over the Titans in 2009.

New England Patriots are the first team to shut out an opponent, on the road, and win by ≥ 45 since 1989

And only the 8th team in NFL history

"Today was a great example of who we felt like we were all year."

This is the 4th time in Bill Belichick's head coaching career he won a game by 45+ points.

That ties Tom Landry for the most such wins by a head coach in the Super Bowl Era (since 1966) pic.twitter.com/8nYufrxpwF