2 years ago at 6:00 am ET
Follow @MarkMorse5
Posted Under: Patriots News 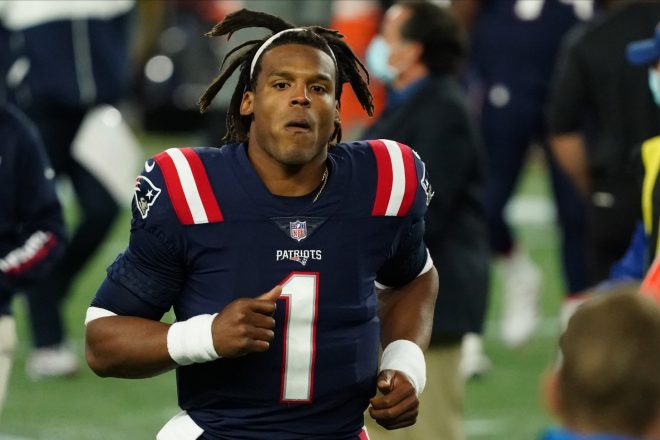 It’s time to replace Cam Newton as QB of the Patriots.

The Patriots beat Arizona last week despite Newton.  His QB rating was an abysmal 20.  He cannot throw anything short.  He has too many balls tipped at the line of scrimmage, one that led to an interception last week.  He throws with a flat or downward trajectory.  He has a long delivery and throws everything hard.  His mechanics are awful.  His 2nd interception of the game (which should have been the game-winner for ARI) was a case of his bad mechanics.  He continually “Steps in the Bucket”, stepping toward the sideline, and relying strictly on his arm strength to complete passes.  He doesn’t anticipate the receiver’s breaks but waits for them to break open before delivering the ball.   He takes too long at the line of scrimmage and has a very drawn-out cadence which can be timed by the defense.  He doesn’t read defenses very well at all.  Opponents are daring him to try and beat them with his arm, knowing that he can’t pass.  They are loading the box with 8-10 players to stop the run.  Newton has thrown 1 TD to a WR this year.

Some writers say that Bill Belichick has seen Jarrett Stidham every day in practice and that he is not ready.  If Stidham cannot beat out a QB with a 20 QB rating and 2 INT’s then he doesn’t belong in the NFL and is stealing a roster spot.  Newton is ignoring the TE position even though Izzo has been wide open.  The Patriots cannot do worse than what Newton is giving them.  I don’t care if they use Hoyer, Newton is not the answer.

N’Keal Harry has disappeared as a player.  He has more holding calls than receptions in the last two games.  The Patriots need to bench or release him and admit they made a huge mistake drafting him in the first round (when they could have had Deebo Samuel).  The scout that recommended he be drafted should be fired.  How did they not see the issues that Harry has when they were scouting him?  I want to see an undrafted free agent that has the desire and will to overcome his limitations rather than a pampered, entitled, physically imposing but limited athlete.  Does he not have the mental capacity to play the position, adjust when it’s called for, and stop making mental mistakes?  That’s a question we need an answer to sooner than later.

READ NEXT:
Patriots-Chargers Week 13 Key Matchups, Who Has the Razor’s Edge?
Posted Under: Patriots News