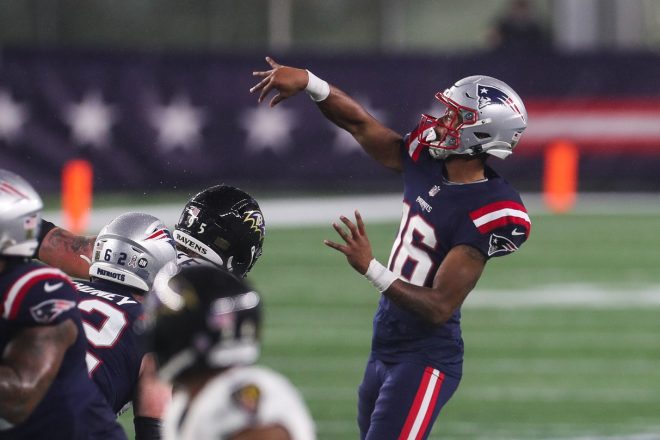 The Patriots leaned heavily on their running game and the defense stepped up with a huge fourth-quarter holding the Ravens to just 25 yards in their final three drives, holding on to a 23-17 win.

The big story of the night was once again Damien Harris who ran for 121 yards on 22 carries. He was questionable to even play in this one, he’s been suffering from a lingering ankle injury and a chest injury he suffered last week against the Jets. But the Patriots set the tone with him right off the bat, as he carried the ball five straight times on the night as the Patriots eventually began to surprisingly assert their will on a strong Ravens defense.

This was a typical Patriots-Ravens heavyweight bout with each team sustaining big body shots and coming back to punish the other. There wasn’t anything fancy about this game, it was just old-fashioned, hard-nosed football. Played in the backdrop of downpours and gusty wind which helped New England who practices outside in conditions like these all the time.

The win was a huge boost for a Patriots team that is trying to find itself after a horrible 2-5 start. They’ve won two-in-a-row and in doing so, snapped the Ravens 10-game road winning streak.

After missing the first three games with a broken finger, Harris has produced three 100-yard games in the last six, solidifying his role as the Patriots lead back. Sony Michel is still on IR but it would be hard right now to envision him getting his job back at this point. Harris was the catalyst to the Patriots rushing for 173 yards as a team against a Ravens team that was allowing only 101.8 yards per game entering tonight.

The Patriots were mixing things up on defense and did a much, much better job of stopping the run than they have through most of this season and especially much better than they did when they met the Ravens a year ago. Baltimore rushed for 115 yards on 28 carries, which is 55 yards fewer than their season average. Lamar Jackson rushed for 55 yards but wasn’t able to light the Patriots up as he did a year ago. He did pass for 249 yards attacking a lot of zone coverage New England was utilizing.

After the Ravens went on a long time-consuming drive to go up 7-0, the Patriots went on one of their best drives of the season going 75 yards in just seven plays with Cam Newton passing to Rex Burkhead for the touchdown.

The Ravens went on another long drive but this time the Patriots stiffened and stopped them on their six-yard line where the automatic Justin Tucker made it 10-7 Baltimore. The Patriots’ final drive of the half was a beauty and harkened back to the playoff game a few years ago. With just over a minute remaining, Newton threw a backward pass to Jakobi Meyers. Meyers, a former QB turned WR then launched a perfect arcing pass down the right sideline to Rex Burkhead who blew past Patrick Queen for the catch in the end zone for a touchdown. The extra point was no-good and the Patriots led 13-10.

“It’s something we’ve practiced over the past couple of weeks. Just never knew when it was going to come up,” Meyers said. “I’m surprised it came up during a rain game, but… I saw Rex out there. Rex is a playmaker… I just put it up there and he did the rest. When I saw the leverage he had on the defender, I knew I was giving him a chance. It was either Rex or nobody. If I couldn’t get it to Rex or throw it out of bounds, I was going to try to get back to the line of scrimmage.”

Jackson tried to force one in the final seconds deep down the sideline, but J.C. Jackson had perfect coverage and picked it off. It was Jackson’s fifth game in a row with an interception, a new team record.

The big question was how would the Patriots react after halftime, receiving the second-half kickoff after a strong showing in the next 30 minutes. The first drive was even more impressive than their first scoring one. Harris gashed the Ravens defense for two long runs, Newton then fired a deep pass down inside the 10 to Meyers and the Patriots were in business. Newton scored easily on a keeper to the right side and the Patriots were up 20-10 and now the feeling was, they were asserting their will in the running game with a great chance to win a much-needed victory.

The weather then played a critical factor. Ravens coach John Harbaugh made a curious decision to take out the reigning MVP Jackson on a 4th and 1, and run a Wildcat play with Mark Ingram. Regardless, the snap was errant and lost 11 yards and set up the Patriots to take a commanding lead. The Patriots drove down to the Baltimore two-yard line but Newton’s pass to an open Meyers in the end zone was short. Scoring a touchdown there would have just about put the Ravens away. Settling for three, the score was 23-10 and the missed extra point could loom large.

But a few things were standing in the way of that comeback, however. The Ravens were 5-0 when winning the turnover battle but just 1-2 when losing it (now 1-3). And Jackson was just 1-6 in his short career when behind at the half. The Patriots defense was trying to take away their running game and was going to take their chances with Baltimore’s passing game.

Jackson led another long scoring drive capped off with a nice 18-yard touchdown pass to Willie Snead narrowing the lead to 23-17 late in the third quarter. But the Patriots defense, aided by near monsoon conditions at times stiffened in the fourth quarter. Baltimore’s three 4th quarter drives netted a total of just 25 yards with their final 4th down pass falling incomplete.

The Patriots showed some tremendous energy on the field, and on a short week after playing on Monday night were extremely well prepared on both sides of the ball. This was a huge boost psychologically for a team trying to claw its way back into the playoff picture.

Offensively Harris, and Rex Burkhead, who had another big game paced the offense. Burkhead rushed 6 times for 31 yards and caught four passes for 35 yards and two touchdowns. Meyers caught five passes for 59 yards and completed his one pass for 24 yards and a touchdown. Newton had another strong game leading the offense, passing for one score and running for another. His only blip was the missed connection with Meyers in the back of the endzone.

Defensively, the Patriots put forth a tremendous effort and handed the Ravens a crushing third loss which leaves them three games behind the Steelers. The younger players on defense Kyle Dugger (playing down in the box) and Terez Hall led the way with 12 and 10 tackles individually.

“Defense was just playing off. The defense just played off, they played great defense,” Jackson said after the game. “At times we wanted to take shots — (against) Cover 3, zone — we just couldn’t do nothing about it.”

Nice win for the Pats. Exciting game to watch.