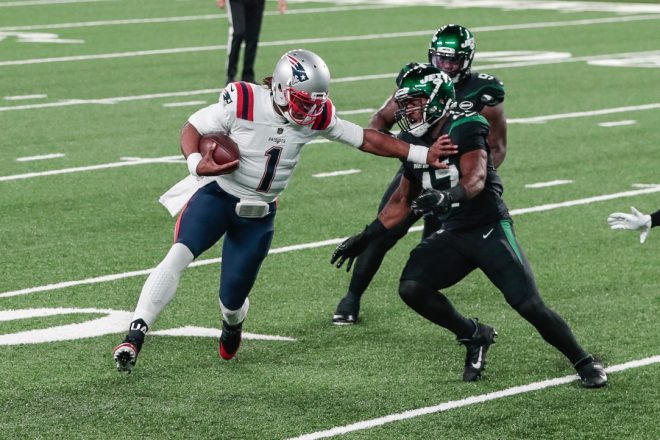 The Patriots and Cam Newton finally were able to pull out a late-game comeback for a victory on Monday Night Football. Riding a dominant quarter where New England totally owned time of possession, Newton drove the Patriots down the field with less than a minute remaining where Nick Folk booted a 51-yard field goal as time expired and the Patriots beat the Jets 30-27.

That’s the good news, and … let’s face it, it was long overdue. They’ve had the previous potential late game-winning drives against Seattle, Denver, and Buffalo fall short. However, as we wrote last week even if they had pulled them all out and sat at 6-2 now, they are a deeply flawed team and aren’t going anywhere.

So now they sit at 3-5 and while the oft-repeated (and technically true) line is that their playoff hopes are still alive, that isn’t happening. Watching this team, they are no closer to making the playoffs than they are to securing the Trevor Lawrence pick (NE currently picks 11th), which fans were clamoring for all game long on social media.

After weeks of frustration, it was obvious that the players felt a huge sigh of relief to get off the schneid of losing. And they battled hard, overcoming a 10-point fourth-quarter deficit to win the game at the gun. And we’ll get to the bright spots in just a moment, but the big caveat here is that this win was against the Jets.

Yes, the Jets are 0-9, and very much deservedly so. They’ve lost their previous 8 games with an average margin of 18 points. They are a mess and rank at or near the bottom in every conceivable offensive category. But with Sam Darnold out and backup QB Joe Flacco in, he shredded the Patriots secondary with far too much ease tonight.

Flacco is far removed from the guy who had a red-hot playoff run with the Ravens a few years ago. But tonight he turned the clocks back and completed 18-25 for 262 yards, with 3 TDs and one INT. For all the talk about needing weapons on offense, the play of the defense right now is a much, much bigger issue.

So, here are some observations scribbled down tonight as the game unfolded:

So, the team flight back from New York had to be a lot better than the one from Buffalo a week ago. But that won’t last long as they have to get right back to work on a short week and a Sunday Night matchup with the Baltimore Ravens.

There remains a lot of work to do, but patience (always in short supply in Boston) is the key here. The coaching staff has a lot of young players and how well they progress will have a lot to do with how this season eventually plays out.

Look for our report card later as we break down the game by position and then we’ll begin previewing the Ravens.