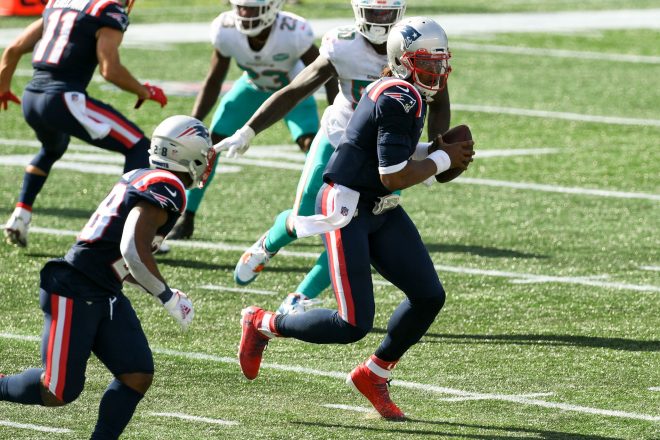 Cam Newton’s first game as a Patriot went off without a hitch on Sunday, with the team coming away with a big win over Miami at Gillette Stadium.

The former Panthers quarterback had a strong outing during the Patriots 21-11 victory over the Dolphins, playing a key role as New England took care of business at home to start the 2020 season off on a high note.

But Newton didn’t just win this one with his arm. He actually finished the afternoon as the team’s leading rusher, taking off and running the football 15 times for 75-yards, including two touchdowns. It was the most rushing yardage by a Patriots quarterback since Steve Grogan rushed for 81-yards against Buffalo back in 1977.

He also had a pretty good afternoon throwing the football. He misfired on just four passes, connecting on 15-of-19 for 155-yards against a Dolphins defense that didn’t make it easy. But Newton took what the Dolphins gave him, with Julian Edelman and N’Keal Harry as the two players who he relied on the most, with both catching 5 passes on the afternoon.

However, it was clear how the Patriots plan on using him this season. We saw a fair amount of the read option, with Newton doing a great job faking the hand off and riding out the football until the last moment and creating enough of an opening with the misdirection to take off upfield. As a big, athletic player, the Dolphins had a tough time slowing him down and the result was a Patriots team that controlled the clock for nearly 35 minutes.

Give offensive coordinator Josh McDaniels credit. He helped put together a game plan that took advantage of Newton’s unique talents and helped them get things off to a strong start. The veteran quarterback admitted after the game that his first outing as a Patriot was different, but he was happy with the results.

“It was different,” said Newton after the game. “It was great for the team to find a way. Things showed up that we would not of expected, as we knew. And things showed up that we did kind of expect. One of the coaching points of the game was to ‘be accessible to in-game adjustments’ and that’s what it pretty much came down to. Getting a win like that, that’s not necessarily ‘pretty’ at times, that’s good overall for the team character and I think we just gotta keep building from this.”

It wasn’t completely without incident. Newton did have a moment late where he got into an altercation with Dolphins players at the end after, according to Newton, they attempted to rip a chain he was wearing off his neck, which he didn’t appreciate. Fortunately, he kept his cool because as far as he was concerned, the win was more important.

“No, I still got my chain. I got two of them,” said Newton. “They were reaching for my chain, though, they were reaching for my chain. And I think that kind of got up under my skin. But through it all…listen, I don’t want anything to be taken away from a great team game that we did have. And I don’t want to be selfish or dwell on that. I think for us as a team, or me personally, a lot of tempers can flare. I was just teasing with coaches, letting them know, ‘that college park almost came out of me.’ It was all fun and games. It was expected.”

Not a bad beginning for a player looking for a new start. For now, the Patriots finish with a win and more importantly, a division win in an AFC East Division that is expected to be competitive this season. The Bills appear to be as tough as most thought, with Buffalo opening with a 27-17 win over the Jets, which was no where near as close as the final score might indicate.

With Newton at the helm, it appears the Patriots aren’t quite done yet. However, we’ll find out just how good they really are next weekend. They’ll face their first big challenge when they head out to Seattle for Sunday night football, with the Seahawks having blown out the Cardinals 38-25 on Sunday.