Best Of Social Media: A Celebration Of Matthew Slater On His Birthday

“How do we feeeeeeel about Matthew Slater’s birthday?”

On Wednesday, the New England Patriots and some teammates celebrated Slater’s 35th birthday.

The NFL veteran and ten-time special teams captain will enter his 12th professional season since being drafted by the Patriots in the fifth round of the 2008 draft.

With Tom Brady and Stephen Gostkowski moving on to other teams, Slater is now the longest tenured member of the franchise.

Check out some of the best social media posts honoring Slater on his special day below. 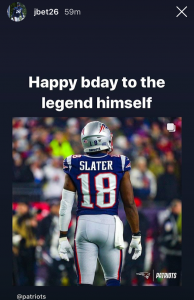 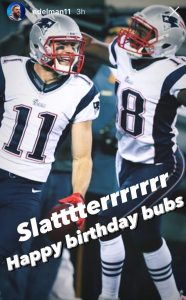 HAPPY BIRTHDAY CAPTAIN MATTHEW SLATER! HOW DO WE FEEL👇! pic.twitter.com/3Nrgd6FsRJ

Happy Birthday to the incomparable special teams ace, Matthew Slater! Hopefully today is as good as this moment last season:pic.twitter.com/lOsavE2pKu

Not sure he has ever made the wrong playpic.twitter.com/XrV2VryX9z

PHOTO: Julian Edelman Spends Fall Day With Daughter In Latest Instagram Post
By: Robert Alvarez
| Patriots Photos
Julian Edelman shares photograph of himself picking out pumpkins on fall day with his daughter in latest post to Instagram.
2 days ago

VIDEO: Sights and Sounds From Week 7 Against The 49ers
By: Robert Alvarez
| Patriots Video
Sights and sounds from the sidelines during the Patriots week 7 matchup with the San Francisco 49ers.
3 days ago
wpDiscuz