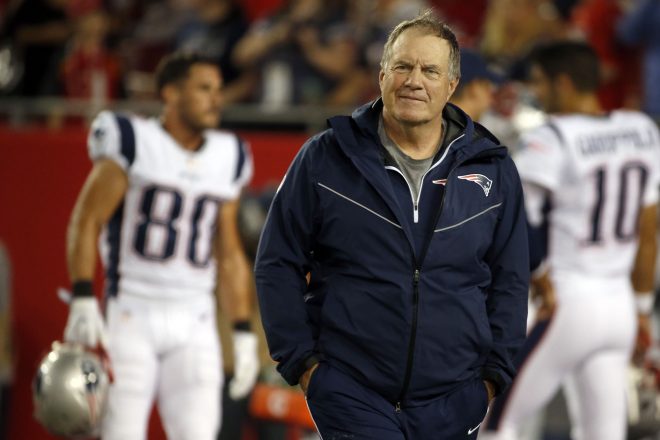 We’re all used to Bill Belichick’s habit of giving half-answers to questions or the occasional grunt and exhale and ignoring some of them completely. But on Wednesday, Belichick was asked about the possibility of platooning his QBs (Jarrett Stidham and Cam Newton), and while he didn’t embrace it, he didn’t rule it completely out either.

Belichick, who is noticeably more relaxed during these virtual press conferences, (have you noticed, he’s smiling much more these days? Unconventional season Bill seems to be a happy camper) gave an intriguing response to the question of possibly platooning QBs and whether it would work, immediately set tongues wagging.

“Yeah, it might. I always say that I’ll do what’s best for the team, what gives us the best chance to win,” Belichick said. “Whatever that is, I would certainly consider it. If it’s running an unbalanced line or a double-unbalanced line, or 23-personnel (2 RBs, 3 TEs 0 WRs), whatever it is. If it helps us win, I would consider everything.”

It is a different season. In a normal year where if Cam Newton had signed with the team back in March or April, his comfort level in the Patriots offense and his grasp of it would be much farther along. But he’s only been with the team since early July and it shows on the field. He’s having to process things and his comfort level and familiarity within the system aren’t there yet. That means that he’s taking longer to make his decisions and holding the ball too long.

That isn’t an indictment of Newton, his time to interact with the players and actually work on the field has been extremely limited, and this is something we’ve mentioned since he was signed. It was going to be an issue, and although he still has about 4 weeks until the games begin for real, he could still be a bit off with his comfort level when the Dolphins arrive on September 13.

Stidham and Brian Hoyer, having had much more time within the system are clearly more comfortable running the Patriots offense right now, which the coaching staff no doubt had anticipated. What happens if 24 days from today, he’s still not completely there? The possible scenarios become intriguing.

One possible scenario (and one we talked about on our last 4th & 2 video podcast, would be for Stidham to start the games and have a set package(s) of plays for Newton to come in and run, such as short-yardage, goalline situations where the defense would have to respect Newton’s ability to run and it would open up different matchups that would favor the offense.

Mike Reiss of ESPN, had the idea that from the X’s and O’s standpoint, that type of situation would make the Dolphins Brian Flores’ job that much harder, having to prepare for two different QB’s skillsets. As Reiss put it, the Patriots could be utilizing QB1A and QB1B, at least to begin the season.

Such a situation would serve several purposes. It would pressure the defense, give Newton the time he needs to fully grasp the offense, and it would save some wear and tear on Newton himself, who has suffered more than his share of injuries during his career.  Obviously having him healthy for a stretch run after Thanksgiving is more important than having him under center in mid-September when the first few weeks will be pretty much glorified preseason games.

Would Newton accept this? That’s the big question. He made it clear earlier this year that he wanted to be the starting QB of wherever he ended up. But this would be a temporary situation scenario.

It is possible that they could give Stidham the job outright and announce him as the starting QB at the end of camp. Would Newton then accept the back-up role? Doubtful. But again, without the benefit of joint practices, preseason games and just a handful of padded practices, that scenario is doubtful from our perspective.

And of course, it could play out that in the next three and a half weeks, Newton finds his comfort level in the offense and he’s ready to go for Miami on September 13. That would probably work out the best for the team and they’ll see how things play out in 2020.

But a long-term platoon situation? No. When you have two QBs, the prevailing train of thought is…you have none.

I remember back in the early 1970s when the Redskins and Cowboys both tried platooning QBs. When Roger Staubach finished his Vietnam and Navy hitch, the Cowboys experimented with him and Craig Morton platooning at QB in 1970-71 and it failed. Finally, he went with Staubach and the Cowboys rolled off 10 straight including a Super Bowl win over the Dolphins.

In 1973-74, George Allen and the Washington “football team” alternated aging QBs Sonny Jurgensen and Billy Kilmer, including having both play in a playoff game against the Rams in 1974 and they lost badly.

The Saints have toyed with the idea but taking a HOF QB in Drew Brees off the field? I think it is simply over-thinking things, but I do get what they’re trying to do.

So, while Belichick didn’t completely shoot down the idea, this is probably just some Belichick-ian PSYOPs against his opponents. This would be a short-term arrangement, at best.