4 years ago at 9:11 am ET
Follow @IanLogue
Posted Under: Daily Patriots Notebook 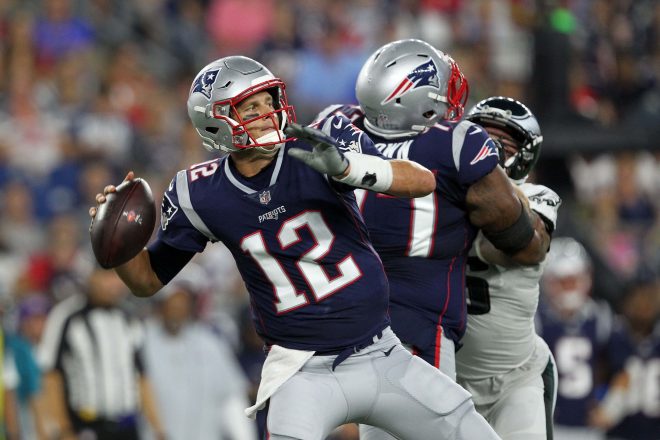 It’s the start of another week and here are some news and notes as we begin this Monday.

Patriots trying to Hide Punter? – One interesting bit of information from Mike Reiss’ Sunday notes was the fact that Reiss believes there may be a reason why we have yet to see punter Corey Bojorquez get any action during a game this preseason.

Bojorquez, who is seemingly in a competition with incumbent Ryan Allen, has been active for both contests against the Redskins and Eagles but hasn’t seen the field.  Over that span Allen has had 13 punts, including four inside the 20-yard line.

While Bill Belichick has downplayed the situation, saying players have to earn their opportunities, Reiss believes Belichick may be keeping Bojorquez on the sideline to prevent other teams from getting tape on him in the hopes Belichick can potentially stash him on the practice squad should he clear wavers at the end of the preseason.

The Patriots find themselves in a tough situation after this season with Allen heading into the final year of his contract.  By keeping Bojorquez in the fold, they would at least give themselves a contingency plan if Allen were to move on to another team.

It’s an interesting notion and will certainly be something to watch over the final two weeks.

Britt Making Progress – The Patriots obviously still have questions at the receiving position heading into the regular season, but it appears despite being out of action, Kenny Britt may be on the verge of providing some help as the season approaches.

The receiver appeared to be in good spirits Sunday and said his hamstring is getting better, although he’s still taking things one day at a time.

“Each day. Every day, I’m doing something different. Feeling better,” he said via Boston Sports Journal. “Right now? My focus is just being able to get out there tomorrow.

“I went out there today. It felt good a little bit,” he added. “(I’m) just doing what they asked me to do. That’s it. Tomorrow is the same thing.”

Getting out there would certainly be an improvement, especially with Julian Edelman sidelined for the first four weeks, as well as the fact the team jettisoned Malcolm Mitchell from the roster after he couldn’t get healthy.  The biggest problem Britt likely faces is the difficulty of getting on the same page with quarterback Tom Brady before the beginning of the regular season after having missed this much time while sidelined due to his hamstring injury.

Britt appeared in the final three games of the regular season in 2017 after being acquired from Cleveland and had two receptions for 23 yards on five targets, four of which came from Brady.  He was inactive for all three postseason games, including the Super Bowl.

Quarterbacks Solid Inside the Red Zone – After putting together the preseason totals over the weekend, there were some interesting totals that stand out after New Engalnd’s first two preseason match-ups.

One thing that was notable was the fact New England’s quarterbacks right now have combined for 5-of-6 (83%) down in the red zone, including two touchdowns.

Brady was a perfect 2-of-2 last week against the Eagles, with one of those completions being a touchdown to Chris Hogan.

As for Brian Hoyer, he’s 3-of-4 (75%) including a touchdown, which also came Thursday night when Cordarrelle Patterson left a defender on the ground as he juked around him and beat three more defensive backs on his way to the end zone.

Meanwhile, looking at another area, the overall third down totals for each quarterback are noticeably different.  Hoyer has completed just 4-of-13 (31%) for 44-yards, while Brady was 4-of-6 (67%) with a touchdown during his start Thursday night.  Danny Etling, who hasn’t seen much action this preseason, is 0-for-1.  Inside the red zone, both Brady and Hoyer are 1-of-1 on third down, with Brady’s pass being Hogan’s TD.

One final stat of note is the fact the running backs have done a good job on third down, combining for 10 carries while converting 7 first downs including a touchdown.  They carried four times with three first downs Thursday night against Philadelphia.

Patriots’ Locker Room Not the Only State of the Art Facility – While the Patriots’ locker room got a huge upgrade this offseason, it looks like there was another that is similarly impressive, albeit at the college ranks.

Business Insider posted a video of the inside of the Texas Longhorn’s locker room, which shows some similarities to what the Patriots did at Gillette Stadium.  Like the Patriots, there are video screens above the lockers and it’s obvious that it’s a state of the art upgrade compared to what most universities and pro stadiums have.  One slight difference is the fact the Longhorn’s lockers are made of stainless steel and have cooling fans for the helmets, along with vents along the bottom to deal with the the orders from their equipment.

The Patriots’ lockers do have folding doors that slide in and were well-designed from an organizational standpoint, but it was surprising to see this type of upgrade at the college level.  The university reportedly spent $7 million on the project.

One thing that stood out was the “Core Values” that are prominently featured for all players to see, which stress, “Honesty, Treat Women With Respect, No Drugs, No Stealing, No Weapons.”

The Longhorns will have to wait a bit to enjoy their new digs on game day.  They open their regular season on the road on September 1st against Maryland and will play their first home game on 9/8 at 8pm against Tulsa.