2 years ago at 10:03 am ET
Follow @MarkMorse5
Posted Under: Patriots News

It’s the weekend before the NFL Draft and the rumor mills are flying with activity.   Smoke and mirrors, cloak and dagger, every team is floating rumors of who they are interested in through their local media members.

What the teams are actually doing is like playing a game of poker.  They’re watching to see if any of the other teams might show a tell, give away what their true intentions are about certain players.  Sometimes the rumors are correct.  Last year, the Giants selecting QB Daniel Jones was the hot rumor.  Many pundits dismissed this rumor, however the Giants pulled the trigger with the 6th pick and now have their QB of the future.

Wonderlic scores of individual players are starting to be leaked by the media.  One disappointing score was from Van Jefferson WR Florida.  He was a player that had been linked to the Patriots as a mid round selection.  Jefferson, the son of former Patriots WR Shawn Jefferson, only scored a 12 on the test.

Everyone knows how difficult it is for WR’s to grasp the intricacies of the Patriots passing game.  I think this score may knock Jefferson out of consideration.  Two other players with high scores were Michael Pittman WR USC and Adam Trautman TE Dayton.  They scored 26 and 25 respectively.  I think everyone knows what I think of Trautman, but Pittman has been flying under the radar because he is a west coast player.  At 6’4” and 223 lbs, Pittman still ran 4.52.  He is tough in traffic too.

He’s currently projected to go somewhere in the 2nd or 3rd round.  Pittman is the son of 11 year NFL veteran RB of the same name.  His father played for the Raiders in the Super Bowl.

– One Patriots rumor that has been spread from several local news outlets includes one claiming the Patriots “have done a lot of homework” on Alabama Edge rusher Terrell Lewis.  Not that this would be a surprise, it’s just part of their due process.  Lewis had a major ACL injury that cost him his season last year and this was his second significant injury during his college career.  He has bounced back and was terrific at the combine.  Oh and there are nine teams that have done the same thing including Philadelphia, who each managed to conduct a meeting with  him.   Lewis is a terrific player and if healthy, he should go in round 2.

– Philly is in the news again, this time the rumor has it they are moving up to take WR CeeDee Lamb Oklahoma.  I’m not buying this one.  The draft is so deep in WR’s that you can get just as serviceable a WR in Rd 3 as in Rd 1.

– Giants are reportedly having lots of discussions, especially about moving back in the draft.  Isaiah Simmons, LB Clemson, should be sitting at #4.  However the Giants are apparently leaning towards taking a big body offensive lineman.  I think they would like to find a trade partner and drop back and pick up an extra draft pick and still get a quality OT.

– Speaking of Big Uglies, rumor is out there that the 1st OT off the board will be Georgia OT Andrew Thomas.  There could be 6 OT’s taken in the 1st round, including the fastest riser on draft boards, Ezra Cleveland OT Boise St.  Cleveland wowed them at the combine with his quick feet and great setup.  He was fast too at 6’ 6”, 311, he ran a 4.93 40 yard dash.  Would the Patriots have the guts to take Cleveland at #23? 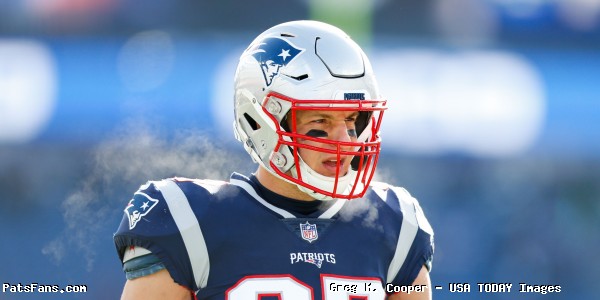 Could Gronk be potentially set for a Brady reunion in Tampa to bring Howard to New England?

– OJ Howard TE Tampa Bay is rumored to be on the trading block.  There was a rumor this week that Gronk might want to return, and that he wants to play with Tom Brady in Tampa Bay.  Could a trade be made?  I’d make that swap.  There is no one better in this draft class and Howard is still young.  Gronk may be great for part of a season but one hit and he could be done.  Even if he plays for the entire season, how much will he have left?  I would consider it getting something for nothing.

– Zack Baun EDGE Wisconsin had a diluted urine sample at the combine.  This is considered a failed drug test, but by new rules in the CBA, will not count against Baun.  This was reported by ESPN’s Adam Schefter and is something to monitor to see if Braun drops in the draft because of this.  His explanation was that he drank too much water, trying to boost his weight for the weigh-ins!

– Rodrigo Blankenship K Georgia is a favorite by many to be selected by the Patriots on Day 3 of the draft.  However, he had a problem with blocked kicks.  Was that on him or the ST unit?  He also kicked in warm weather with just barely above average results.  Would someone like Chase Vinatieri, nephew of Adam Vinatieri be a better choice?  Chase stands 6’ 2” 211 lbs and kicked at South Dakota St.  He is accustomed to playing in bad weather.

– Two excellent articles that are worth reading.  First is Jeff Howe of the Athletic on the scouting of and drafting of Rob Gronkowski LINK .  Of note in the article are the number of scouts that are now working for other teams, especially the GM’s.  Bill Belichick can pick up the phone and talk to Bill O’Brien (HOU), Jason Licht (TB), Tom Dimitroff (ATL), John Robinson (TEN), and Bob Quinn (DET).  They are all former Patriots coaches, scouting directors.  The bad side of that is they all structure their scouting, drafts and draft boards like the Patriots do.

– There was also a great article by Bernd Buchmasser of PatsPulpit.com (LINK) on Dan Famosi, the Patriots IT Director.  He may end up being the MVP of this draft because of this virtual draft and dependency on the Information Technology.  He is also the answer to a great trivia question.  He has been on the Patriots Staff for 20 years and is one of only six people (excluding owners and office staff) that has six rings.  Time to shine Dan.   Famosi will be the only member of the team allowed in the same location as Bill Belichick, per the league instructions.