4 weeks ago at 11:51 am ET
Follow @IanLogue
Posted Under: Patriots News 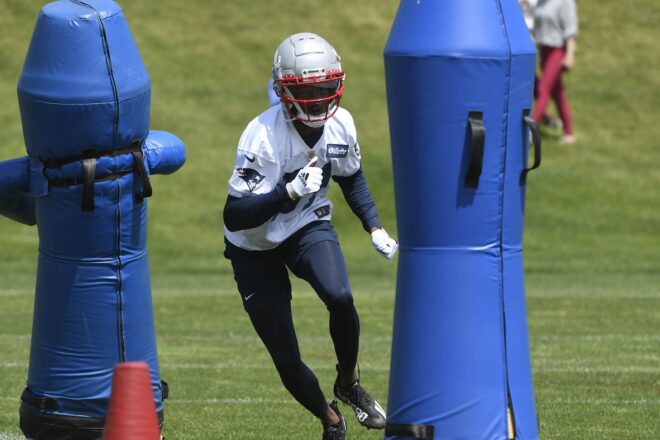 – Malcolm Butler has been working hard since coming back to New England and while he’s glad to be here, he talked about the fact that each day he’s focused on establishing himself again.  “I feel like I have a lot to prove, especially to myself,” Butler said via AL.com. “And if I do it myself, I prove it to my teammates at the same time, so that’s why I’m working hard every day and trying to stay focused where I am.”

– Butler’s teammate, Jonathan Jones said earlier this week that not much has changed with Butler, who he believes has essentially picked up where he left off.  “Malcolm’s the same player, in my opinion,” said Jones. “He comes out, he works hard and just wants to get better every day. He hasn’t lost that itch for the game.”

– Jones is probably the player who will be in the spotlight the most this season, as he was on the rise prior to his season-ending injury in 2021.  He was terrific in coverage and he’s been a player who has had success defending some of the opponents’ best players, including notable names like Miami’s Tyreek Hill.  Given the changes in the team’s secondary, his ascension, if it does indeed happen this year, would be great to see and it could be a big key to their success in 2022.

– While thinking a little more about rookie receiver Tyquan Thornton, I keep coming back to the fact that it wouldn’t be surprising if Bill Belichick had him watching tape of former New England Patriots receiver, Deion Branch.  Anyone who remembers Branch likely recalls the fact he was the master when it came to self-preservation, often dropping down after a catch and cutting his losses instead of taking a big hit.  While people talked about Thornton’s lack of yards after the catch and typically don’t like seeing guys give themselves up, I think most people would be fine with big plays and seeing the rookie protect himself enough to keep making them.

What to Do With Wynn?

Tom Curran of NBC Sports Boston pondered the situation with Isaiah Wynn, which remains an interesting one and leaves the Patriots with a difficult decision heading into this season.

Curran suggests possibly trading Wynn, which while possibly giving New England draft capital in 2023 is appealing, it joins the trade of Shaq Mason in that it creates another issue.

Complicating things even further is the injury history of Trent Brown and the fact he hasn’t played at left tackle since he handled that role in 2018. Brown was missing from the team’s practice earlier this week, although there was no context behind the absence.

He had been present previously, so it’s tough to say why he wasn’t out there during the Patriots’ session on Tuesday.

However, the idea of Yodny Cajuste, who filled in at left tackle on Tuesday, being the guy potentially protecting Mac Jones’ blindside in 2022 if the team were to trade Wynn and Brown was to suffer an injury and miss time isn’t exactly appealing.

At the same time, the Patriots are in a tough spot.  They have Wynn in the final year of his contract after picking up his fifth-year option.  Letting him walk at the end of the season isn’t ideal, especially if they can potentially get something for him and clear his money off the books.

As Curran points out, given the team’s cash-strapped situation, moving Wynn would certainly solve that.

At the same time, it creates another problem they’ll need to solve because they just don’t have the depth to weather it.  This is a team that doesn’t have the luxury of a deep group of tackles and is heading into a key year.

After an embarrassing playoff exit in January, Belichick needs to get things back on track and that’s difficult to do if his second-year quarterback is taking unnecessary hits due to a void they created by dealing Wynn.

In a perfect world, they could live with Brown for a full season at left tackle and possibly have Justin Herron, who was at right tackle last week and again on Tuesday, handle those duties.  But that’s provided everyone stays healthy for the entire year and nothing drastic happens.  After seeing what happened injury-wise with that group last season, it’s tough to feel overly confident about things playing out that way.

Whether or not Belichick opts to roll the dice will remain something to watch but the fact Wynn hasn’t been here so far is definitely concerning.

– Thornton talked to reporters earlier this week and said that while he’s working out, people shouldn’t expect to see a big change to his size.  “Just staying true to myself,” said Thornton. “Always look at myself in the mirror. You know, this is my body type. This is my frame. I don’t see myself being 225 pounds. Been thin all my life.”

– He added that his biggest focus during his training regimen has been on making sure he keeps his speed and quickness.  “Just getting stronger in the weight room,” said Thornton. “Building my muscles so I can have that fast twitch.”

– Newcomer DeVante Parker hasn’t been here long but he’s seen enough of Jones to know the second-year quarterback has what it takes and is definitely in command.  “He’s a leader. He’s a young guy, but he’s vocal as a leader. That’s what this team needs,” Parker said. “I’ve been out here a few weeks, but I see it though.”

– Anyone hoping to see the Patriots clear some cap space and possibly add Akiem Hicks, who had still been a free agent, will likely be disappointed.  Hicks signed with the Buccaneers, signing a one-year deal worth $6.5 million.  However, according to reporter Greg Auman of The Athletic, that deal also reportedly includes $1.5 million in per-game roster bonuses and $2 million in incentives, which could see him reach $10 million.

– What’s interesting about Hicks’ signing is it seemingly closes the door on Ndamukong Suh returning to the Buccaneers.  While it’s fun to speculate on where someone like him could end up, for now, until the Patriots get their finances straight, seeing him potentially end up in Foxboro seems unlikely.