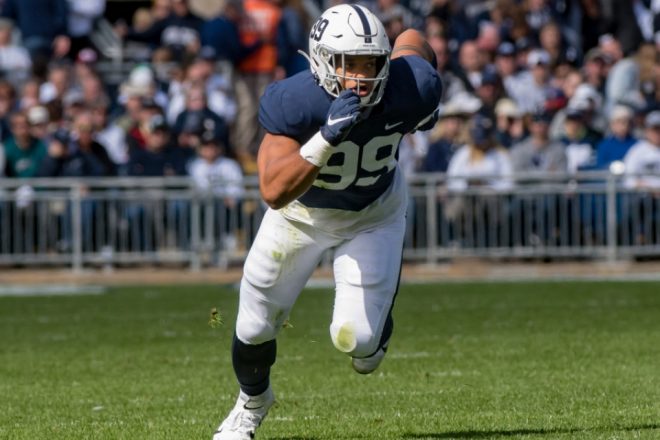 We’ve taken a look at a couple of linebackers and at safety but today we’ll look at the defensive line, specifically the defensive end/edge area.

The Patriots don’t like to rely on one designated pass rusher but a collective effort where they can use different players to create mismatches by using stunts and blitzes to get after the opposing QB. The Patriots were tied for 7th in 2019 with 47 sacks but the leading sack producer was Jamie Collins with 7 followed by Kyle Van Noy with 6.5. Both of them are gone, so the production will have to come from elsewhere.

On the edge, the Patriots currently have among the players on the roster Deatrich Wise, John Simon, Chase Winovich and Derek Rivers. They can use some fresh blood in there and provide them with the production that they received from Trey Flowers who signed with Detroit a year ago.

So, let’s take a look at another one of the prospects that we feel would be a good fit for the Patriots and vice versa. A while back we wrote about Iowa DE A.J. Epenesa who could fall to them late in the first round of the upcoming draft. But this next player has an intriguing story.

Yetur Gross-Matos from Penn State is a very productive defensive end who is another talented defender just scratching the surface of his professional potential. He’s a long fluid athlete and has the prototypical size for a defensive end at 6’5, 265.

He’s got excellent quickness and speed to power and consistently walks tackles back into the pocket. His production spiked in his last two seasons and last year had 40 tackles, 15.5 tackles for a loss with 9.5 sacks and 7 QB hits.

Gross-Matos had to overcome a lot in his early life as he lost his father to a drowning accident and a brother who was struck by lightning before he was 11 years old. He checks all of the blocks with size, speed, production, and athleticism.

– Very good change of direction, and can disrupt the play at the LOS

– Growing more as a pass rusher

– Sometimes allows blockers to get in his chest

– Still needs to grow into his frame

Gross-Matos would initially be a sub-package pass rusher as a rookie. But he has the ability, with good coaching to become an every-down player

Yes, in Year 2 he should be competing for starting reps

No one. His potential mirrors that of the former defensive end Trey Flowers.

Conclusion:
Bleacher Report’s Matt Miller, their resident draft expert wrote about the Litany Lion, “Yetur Gross-Matos is an impressive person and player. He has the size (6’5″, 266 lbs) to play 4-3 defensive end right out of the gate and will remind fans of Trey Flowers with his mixture of power and quickness. He’s also just scratching the surface of what he can be down the road with good coaching—something he’ll get plenty of in New England.

Gross-Matos is not yet the sum of his parts. The best word when describing him is “potential”. He’s one of those twitchy edge rushers with the size, length, bend and burst that teams covet at defensive end.

While he’s far from a finished product and could easily pack on another 10-15 pounds of muscle on his frame, he also needs to improve his hand usage, something the Patriots have a perfect mentor in Joe Kim, who uses a martial arts background to teach that.

Once Gross-Matos harnesses his potential with his speed-to-power moves and improves in the small things that he needs to clean up, he has a ton of upside. In a draft without a ton of talented pass rushers, he is one of the top 3-4 with the ability to become a star in the making. If the Patriots decide to use #23 or trade back into the 2nd round, Gross-Matos should still be available to them.