Larry Eisenhauer played pro football for nine years, all with the Boston Patriots. He never missed a game until his seventh season when knee injuries sidelined him for a few weeks. Eisenhauer was a four time AFL All-Star, named first team All Pro three times, and a member of the All-AFL Anniversary Team. Eisenhauer, Bob Dee, Houston Antwine and Jim Lee Hunt teamed for a ferocious front four. Their tenacious play resulted in the Patriot defense being the best in the league from 1963 to 1966.

Eisenhauer totaled 47½ career sacks, leading the team in that category for four straight seasons (1962-65). He was named to the Patriots 1960s All-Decade Team in 1971, the Patriots 35th Anniversary Team, and inducted into the Boston College Varsity Club Athletic Hall of Fame in 1978. After retiring in 1970 he became owner and operator of Data Metal Company, a computer hardware business in Boston.

Nicknamed the ‘Wild Man’, Larry Eisenhauer would psyche himself up before games by smashing walls and destroying lockers. He knocked five opposing quarterbacks out of the game with injuries, and once ran onto the field during a snowstorm in Kansas City dressed in nothing but a helmet and jock strap.

Billy Sullivan was always seeking free publicity and one day had Rex Trailer of the local Boomtown show film a promo. The slow sidekick named Pablo put on a uniform and was supposed to run through the Pats defense and score a touchdown. Just before the end zone Eisenhauer shocked everyone by leveling Pablo. He stood over the shocked and dazed actor and screamed “Nobody gets across our goal line! Not even a clown!” 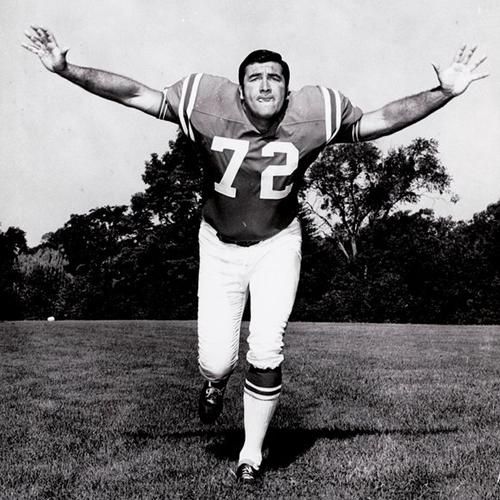 In 1963 the Patriots were in San Diego for the AFL title game. The Stardust Hotel had a rooftop bar next to a pool.  It featured a show with women dressed up as mermaids performing synchronized swimming beneath the surface, in front of windows one floor below. Eisenhauer and his father were enjoying a few cocktails when the program began. They decided to take a dip but had no bathing suits. No problem, they simply dropped their drawers and jumped in, enjoying the refreshing water. This obviously disrupted the show – much to the delight of several teammates and other bar patrons who were watching downstairs. Unfortunately this was long before cell phone videos, because we would all really enjoy being able to watch that.

Inexplicably Eisenhauer is not a member of the Patriots Hall of Fame. It is unfortunate that he will join Jim Nance, Leon Gray and Houston Antwine as players that eventually received that honor too late to enjoy it. Larry Eisenhauer passed away last month on January 20 at the age of 79. 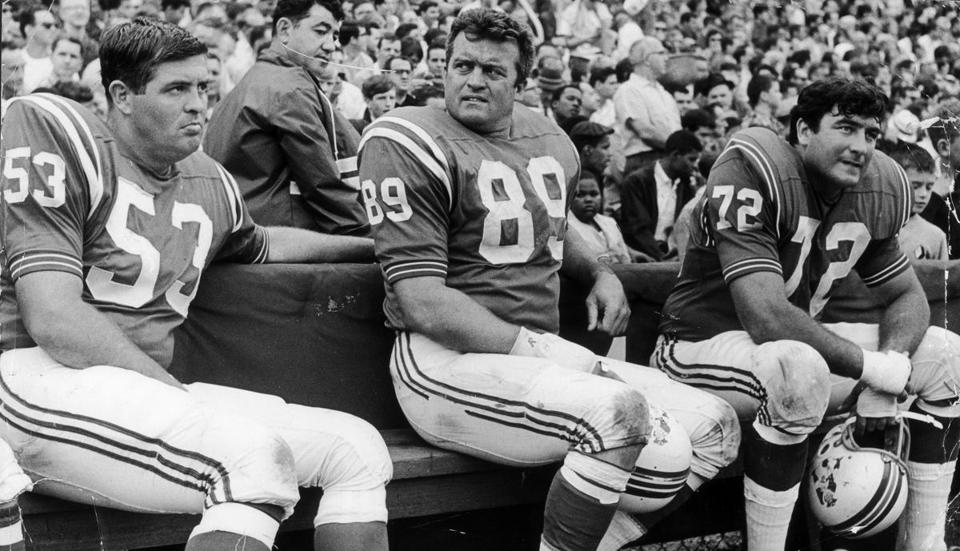 Shawn Jefferson was a ninth round pick by the Oilers in 1991, from Central Florida. Houston traded him to San Diego prior to the start of the season, where he played sparingly before becoming a starter in 1994. The Pats signed him to what was big free agent money in ’96: a four-year, $6.4 million deal that included a $1.4 million signing bonus. Jefferson only missed one game in four seasons with the Pats. He led the team in receiving yards in ’97, in receiving touchdowns in ’99, and had a league-best 22.7 yards per reception in 1998.

Jefferson also had 24 receptions for 284 yards in six playoff games. In the 1997 postseason game against Pittsburgh he was at his best, with nine catches for 104 yards. Jefferson spent twelve seasons in the NFL, with 470 receptions for 7,023 yards.

His status on the Patriots all time leader board is quite impressive when you consider the fact that he was with New England for only four years, and played before Bill Polian tinkered with the rule book. Jefferson’s 3,081 yards receiving was eighth in franchise history when he departed after the 1999 season (it ranks 18th now). His 178 receptions was 15th most at that time (now 25th) and the 14 touchdown catches were also 15th (now 27th). Since 2006 Jefferson has worked in the NFL as a wide receivers coach, for the Lions, Titans, Dolphins and now Jets.

Fast forward to the final two minutes of the game for the Shawn Jefferson highlight reel below.

Max lane spent his entire NFL career with the Patriots, playing in 107 games. He was a versatile lineman, starting at right tackle, left guard and right guard over seven seasons. Lane was given a five-year contract worth $11 million in 1998, after having been paid $200,000 the previous year. In missed four games early with a broken thumb and then went on IR after a week 11 leg injury. The salary, age and injuries all led to his being released on May 4, 2001 as part of Bill Belichick’s house cleaning.

Unfortunately Max Lane is probably most well remembered for being overwhelmed by Reggie White in the second half of Super Bowl 31 versus Green Bay – something that gnawed at Lane’s psyche for years. Lane has been a volunteer coach at Georgetown High School in recent years. He works for Crown Mortgage and helps raise money to aid research for tubular myopathy.

Antwain Spann appeared in 22 games for the Patriots over three seasons. He was primarily used on special teams, often bouncing between the practice squad and active roster. Spann also played in all three 2006 postseason games. He was originally signed as an undrafted rookie from Louisiana-Lafayette by the Giants in 2005.

Saving the best for last

I would be remiss if this important historic event were not included as well.

February 22, 2019:
The world finds out about Robert Kraft’s happy ending at the Orchids of Asia Day Spa in Jupiter, Florida. The 77-year old billionaire was charged with two counts of soliciting prostitution that law enforcement uncovered as part of a sex trafficking investigation. Things are looking up for Bob now though, as he has moved on from a girlfriend young enough to be his granddaughter to one that is only about thirty years younger than he is.

By: Steve Balestrieri
Despite garnering only 18 snaps, Bourne was the Patriots' second most productive receiver catching four passes for 58 yards
20 hours ago

By: Robert Alvarez
Prior to Sunday’s matchup with the Baltimore Ravens, the New England Patriots held a special induction ceremony on Saturday for former nose tackle Vince Wilfork…
1 day ago

By: Robert Alvarez
A look at defensive lineman Davon Godchaux’s journey to the NFL from Louisiana State University Football to the New England Patriots.
1 day ago