3 years ago at 6:00 am ET
Follow @AllThingsPats
Posted Under: Patriots Commentary 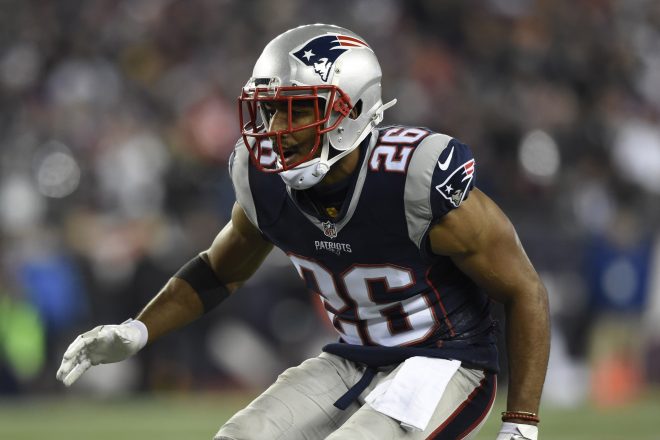 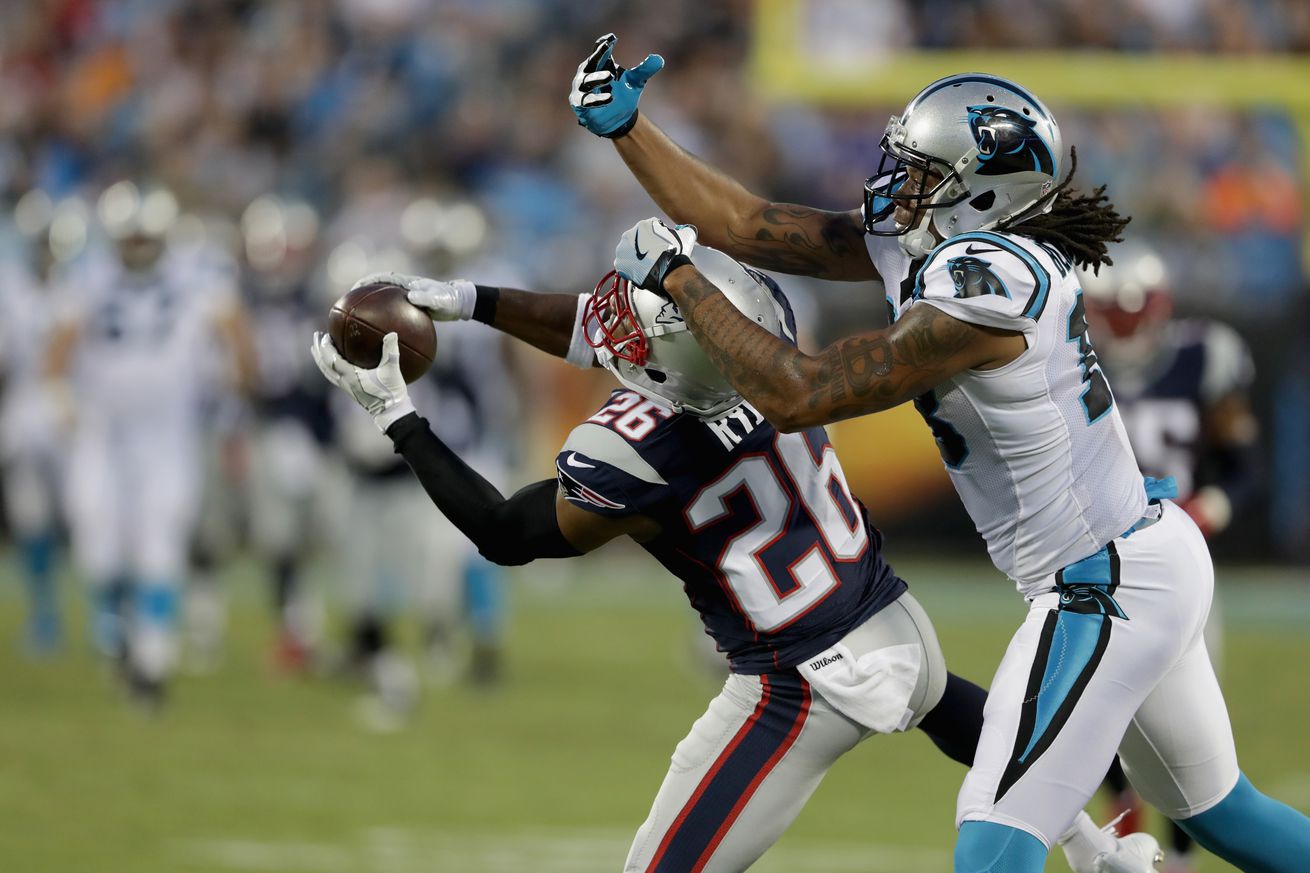 Logan Ryan never missed a game while with the Patriots, appearing in 64 games with 40 starts. In the regular season he had 13 interceptions, including a 79 yard pick-six off Geno Smith.

During his time in Foxborough the corner made 259 tackles (202 solo) with 2½ sacks, four forced fumbles, five tackles for a loss and six quarterback hits.

Logan Ryan also appeared in ten playoff games for New England, with the Patriots going 8-2 in those contests. He earned rings for Super Bowl victories over Seattle and Atlanta. He was on the field for 976 defensive snaps in 2015 (89%) and 897 in 2016 (86%), and for all but one defensive snap in the five 2016 and 2017 postseason games. Ryan’s fourth quarter interception against Houston that he ran back to the six yard line – just after the Texans had scored – set up the game clinching touchdown run by Dion Lewis.

Tennessee lured Ryan away in 2017 with a three year, $30 million contract. That was a nice payday for Logan, and he is due for one more. Ryan will be a coveted cornerback in free agency in 2020.

Doctor Patrick O’Neill handled kickoffs and punts with the Patriots for a year and a half. He could have gone on to have a much longer NFL career, but instead put his brain power to use for a better purpose.

The Big, Slow Guy Wins the Race for the Football | New York Times

Late in the third quarter, with the Jets leading, 13-10, the Patriots faced fourth down and 7 yards to go from New York’s 31-yard line. It seemed time for a 49-yard field goal attempt but the Patriots’ kicker, Matt Bahr, while making 23 of 28 this year, had not kicked one beyond 48 yards.

The Patriots sent out their field-goal team – but with Pat O’Neill, the punter and long-distance field-goal kicker, rather than Bahr. Everyone expected a field-goal attempt – everyone except Scott Zolak, the holder. On the sideline, he was told to call the fake.

The Jets lined up for a field goal, but Zolak called the signal that said it would be a fake. Zolak put his hands out to take the supposed snap. Instead, it went directly to O’Neill, who kicked a soft punt instead.

The ball landed on the 10-yard line and bounced toward the end zone. A team expecting a punt would have had someone back there to block anyone trying to down the ball short of the end zone. But the Jets were expecting a field-goal attempt and had no one stationed deep. Todd Rucci, the 291-pound guard for the Patriots, had clear sailing past Ronnie Lott. He downed the football on the 1, and the Jets had their backs to the goal.

The trick play sparked the Patriots to their fourth straight win after a miserable start. They kept it up through their last game, tying Miami’s record at 10-6 and winning a wild-card playoff berth.

The Patriots drew the Cleveland Browns in the first round, and O’Neill pulled off another trick play, throwing a pass for a first down. Percentage-wise, he had a better day than quarterback Drew Bledsoe, who threw three interceptions in a 20-13 loss.

That first year he averaged 41 yards per punt, good for playing half his games at open, wind-swept Foxboro. It placed him 10th in the 14-team league, but less than a yard off the average punter. He also hit the fourth-longest punt of any kicker that year.

The numbers, though, masked a challenging season. Punting looks simple on television, but November brings cold and trials invisible to the cameras.

“The ball’s a piece of stone, the wind blows, you have no footing because the grass won’t grow and the field doesn’t absorb moisture,” he said.

“There were games where I was as good as anyone I’d seen. Then there were games I didn’t do well,” he said recently, at the end of a day of seeing patients. “At some point, I said, ‘I like this, but is it worth it?’”

So that off-season, while his teammates rested, he tackled something in some ways more arduous than training camp: He took the MCAT, the medical school admission test.

Dr. O’Neill is an orthopaedic surgeon with advanced fellowship training in the treatment of the foot and ankle. This is the highest level of training possible and Dr. O’Neill is the only one in Sarasota County who can make this claim. His medical school, training, and fellowship in Foot and Ankle were completed at the Johns Hopkins/Union Memorial Hospital program in Baltimore, MD, where he studied with nationally and internationally renowned surgeons. He received his undergraduate degree in Bioengineering from Syracuse University.

Dr. O’Neill is highly trained in the latest non-surgical and surgical treatments for a wide range of disorders of the foot and ankle. He treats sports-related injuries, tendon disorders, foot and ankle trauma, diabetes, nerve disorders, rheumatoid and osteoarthritis, heel pain, bunions, hammer toes, and amputations. Any area of the foot and ankle may be involved, including the forefoot, midfoot, hindfoot, or ankle. Patients may have either simple common problems, or more complex problems which could require complicated reconstructive procedures.

While at Syracuse University, Dr. O’Neill excelled both on and off the playing field. Some of his academic accomplishments include Academic All-American and University Scholar, Syracuse’s highest honor. Dr. O’Neill was also a member of the Syracuse Orangemen football team as a Punter and Kicker, and was ultimately named to the All-20th Century Football Team. Upon leaving Syracuse, Dr. O’Neill was drafted in the 5th round of the NFL draft by the New England Patriots, and in his first year he was named the NFL All-rookie Punter.

Terry Billups went undrafted out of North Carolina, and spent time with Dallas in 1998. In ’99 he played for the Rhein Fire in NFL Europe, and also saw action in two games for the Patriots. With four tackles in one game against Baltimore he is okay in my book.

Billups is another player who has had a nice professional post-NFL career. He was a federal law clerk in Illinois, then an attorney in Cleveland from 2006 to 2014. He then worked as general counsel at Ursuline College for over five years, and opened his own law firm in 2019.

Dan Ross would have been 63 today
Born Feb 9, 1957 in Malden
Went to Everett High School and Northeastern

Ross was the Bengals’ second-round choice in the 1979 draft, the 30th player selected overall that year. He earned a starting berth as a rookie and notched 41 catches for 516 yards and one touchdown. In his first five seasons with the Bengals, Ross posted more than 40 receptions every year, and he averaged 51.4 catches and 628.2 yards and scored 16 touchdowns.

Ross left the Bengals following the 1983 season to sign with the New Orleans Breakers of the USFL. He returned to Cincinnati in 1985 and split that season between the Bengals and Seattle Seahawks. His final season in the NFL was in 1986 with the Green Bay Packers.

Dom Principe
Born Feb 9, 1917 in Brockton
Sandwiched around his time in the war, the Brockton High School alum was a fullback for the NFL’s New York Giants and AAFC Brooklyn Dodgers.

Tommy Myers
Born Feb 9, 1901 in New Britain CT
The Fordham Flash was a blocking back for a couple seasons in the twenties.

Dick King
Born February 9, 1895 in Boston
Richard Stewart Cutter King went to Boston Latin High School and Harvard University. He was a coach and roadshow star fullback-wingback-tailback before the NFL was the NFL, when semi-pro teams toured middle america. In NFL’s infancy King played for teams like the Hammond Pros, Milwaukee Badgers, Rochester Jeffersons and St. Louis All-Stars. King was an anomaly, a married Harvard student working his way through college to pay for the two children he had by the age of twenty. He later made headlines marrying a twice-divorced woman, then died a mysterious death at the age of 35 in Bogata, Columbia.