Mac Jones can take a hit, but Patriots QB took too many in debut 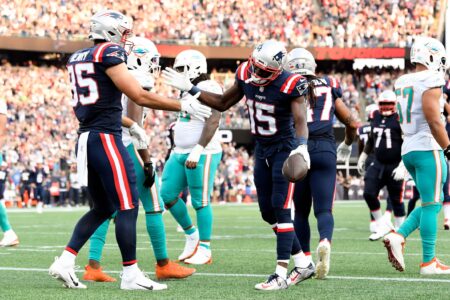 2020 Patriots Offseason:
VIDEO: Sights and Sounds From Week 1 Between The Patriots and Dolphins
By: Robert Alvarez

FOXBORO, MA -- It looks like the Patriots won't be taking a runningback in this weekend's NFL Draft.

New England traded one of their second round picks (56th overall) for the Bengal's all-time leading rusher who likely will replace Antowain Smith as the team's featured back.

Dillon's reputation of being difficult may cause a few fans to wonder why Belichick would take a chance on bringing him to New England. He reportedly threw his helmet, shoulder pads, and cleats into the stands at Paul Brown Stadium after a loss to Cleveland left the Bengals at 8-8 and ended their season. At the time Dillon had told reporters that he wanted out.

Dillon then reportedly renewed his push for a trade last month when he went on a national sports talk show dressed in a Raiders Jersey, and also lashed out at Pro Bowl offensive tackle Willie Anderson by calling him "a bum." Anderson had apparently criticized Dillon for being selfish while the team was in playoff contention.

But Steve Feldman, Dillon's agent, told the Bengals' official website that Cincinnati had given Belichick permission to talk to Dillon prior to the trade, with the Patriots coach likely laying the ground rules of would be required of Dillon in order to make the deal a reality, and give him a chance at a possible championship.

"[Belichick] obviously heard what he wanted to hear," Feldman told the website.

Needless to say his client is excited about joining a team who has won two championships over the past three seasons.

"[Dillon]'s absolutely, positively thrilled with the move to the Patriots," Feldman told the Associated Press. "He just wanted to go to a winner. It gives him the opportunity to restart, and gives them another piece to add to the puzzle."

The Providence Journal had reported back in March that Feldman had said he'd been talking to the Patriots about Dillon. According to the report back then the conversations were reportedly one-sided, with Feldman doing most of the talking. The agent also didn't indicate much interest on the part of the New England at that time.

Apparently in the end the price wasn't high enough to prevent the Patriots from taking a chance on him. Dillon is coming off of a season where he suffered a torn groin, which limited his playing time in 2003. The injury allowed teammate Rudi Johnson to prove himself to head coach Marvin Lewis, who like Belichick is trying to build a young nucleus of players that is committed to the coach's program.

In the end Lewis obviously felt the deal was a good one for both Dillon and the Bengals, and Belichick was apparently just fine with it as well.

"We are very excited about Corey Dillon becoming a Patriot," Belichick said on the Patriots' official website. "Corey joins Kevin Faulk and our other very good backs to deepen an already competitive running back position. We acquired multiple draft choices with the intention of strengthening the team and Corey Dillon and Rodney Bailey should help achieve that goal."

Dillon certainly has a lot to prove. He believes he is a workhorse and should be carrying the ball more than 20-times a game, but hasn't carried more than 23 times in a game in more than a year, when he went for 138 yards on 30 carries back on Oct. 27, 2002 in a 30-24 loss to Tennessee.

In seven seasons with the Bengals, Dillon rushed for over 100 yards 28 times, including three 200-yard performances.