3 years ago at 9:52 am ET
Follow @IanLogue
Posted Under: Patriots News 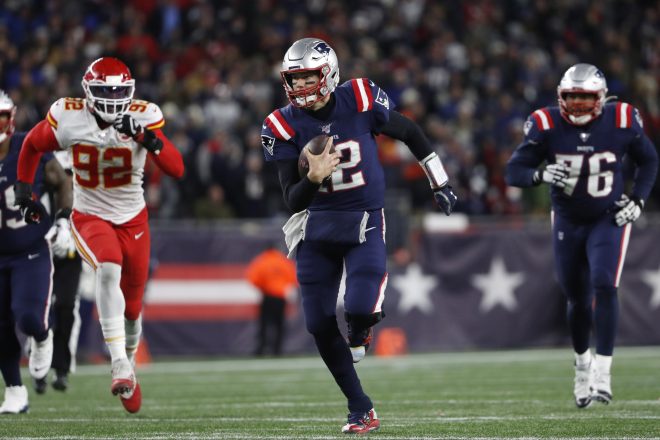 When the Patriots look back at Sunday’s loss to the Chiefs, while the officiating was beyond frustrating, the bigger frustration really centered around the fact that they had more than enough chances to win this football game but just couldn’t make enough plays when it mattered.

That’s been the storyline all season and it continued on Sunday.  Despite being at home, the Patriots still couldn’t fix what’s wrong with an offense that managed to put up just sixteen points against an explosive Chiefs team that New England’s defense completely shut down in the second half.

Make no mistake, despite giving up 17 second-quarter points, that group did more than enough for the Patriots to win the game.  They held Patrick Mahomes and the Chiefs’ offense to just 3 second-half points, putting Brady and the offense in position for a comeback.  The only problem was, New England’s offense just doesn’t have quite enough at this point to pull off the same types of miracles we’re used to seeing.

To make matters worse, for a team that was already dealing with little margin for error in this game, it didn’t help that the officials made their own mistakes that cost the Patriots badly in this loss.  That will be the topic of discussion for at least a few days until the sting wears off.  After that, the fact Bill Belichick’s team could have kept it from ever reaching that point is the reality we remain left with and overcoming that remains the bigger problem.

Heading into the final weeks of the season, it’s time to accept the fact the problems they have are what they are.  They’re not going to change and it’s no secret that some of their issues have been caused by the fact the club made some personnel missteps and gambles that simply didn’t pay off.

The biggest one that remains frustrating was the fact they gambled on Antonio Brown, who lasted with the club for just one game before it blew up in their face, with Brown being accused of sexual assault.  The accusations were one thing, but the fact he was unable to just allow the people he was paying to do their job instead of harassing an accuser via text ended up costing him his place on this football team.

But it didn’t end there.  Brown ended up being his own worst enemy and he made it worse with his social media outbursts that further complicated things here for him, seemingly damaging any chance he had for a potential return.  On Sunday, Adam Schefter confirmed previous reports that a reunion in New England isn’t likely and that the Patriots don’t intend on re-signing him.  The market is reportedly expected to be busy for Brown when he does become eligible to play again, which likely would have further complicated things.

But Brown wasn’t the only player that let them down.  They gambled on Josh Gordon, devoting a roster spot to a player who let them down last season and according to reports, the embattled receiver started having issues internally this year and it led to the team ultimately waiving him.  At the time, the addition of Brown and Gordon’s place on the roster ultimately led to them parting ways with Demaryius Thomas, who scored a touchdown with the Jets on Sunday.

They gambled by acquiring Mohamed Sanu at the trade deadline, who initially looked like a pretty solid pick up.  But a high ankle sprain has hampered him and it remains to be seen whether or not, if the team can still pull off a first-round bye in the playoff seeding, Sanu will be able to get healthy enough to somehow be able to be a difference-maker in the postseason. 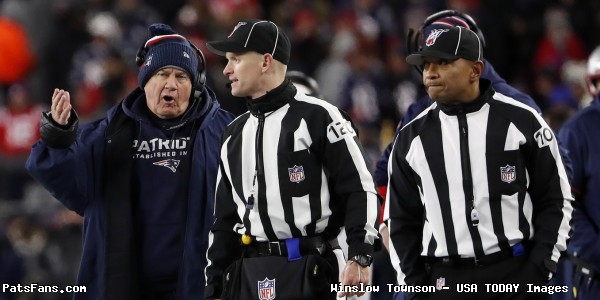 Belichick had to battle the officials during Sunday’s loss to Kansas City.

From there, they’re just a team full of question marks.  On paper, they seem like they have enough to work with in the passing game.  They have veteran receivers Julian Edelman, Sanu and Phillip Dorsett.  They have dynamic running backs in James White and Rex Burkhead.  They have speedy rookies in Jakobi Meyers and first-round pick N’Keal Harry.

The problem is, injuries and inexperience are absolutely killing them.  Two of their key veteran receivers are banged up.  Sanu is still recovering from his ankle injury.  Dorsett is clearly still not 100% and left the game briefly again on Sunday.  Both Harry and Meyers continue to be shakey out there, with neither player clearly on the same page with quarterback Tom Brady.  To make matters worse, Harry suffered an apparent hip injury while diving for the pylon as he tried to score a touchdown late in Sunday’s contest.

The officials blew the call after saying Harry stepped out, despite the fact replay showed he never went out of bounds. The kind folks running the jumbotron at Gillette Stadium replayed that over and over, firing up an already irritated crowd who had to endure one of the worst officiating performances we’ve seen in a game that held serious importance given that the Patriots were trying to keep pace with the Ravens, who beat the Bills on Sunday.

So now, Harry’s status for next weekend is in question, potentially leaving the Patriots down another body in an area where they couldn’t afford to be any thinner.  Meyers had a couple of drops and finished Sunday exactly the same way he came into it as a player who still clearly has a long way to go.

As a result, Brady will still find himself next Sunday dropping back and looking for guys that he still doesn’t have a lot of faith in out in Cincinnati.

The offensive line has been their other big problem.  They’ve struggled running the football this season and have had difficulty protecting Brady, which has been largely due to injuries.  Their problems started with David Andrews developing blood clots in his lungs just before the start of the season.  He was one of their most ferocious inside linemen and his loss, along with other injuries up front, have plagued them all year.  They were shorthanded again on Sunday after Ted Karras was sidelined and James Ferentz stepped in at center, but the Chiefs were able to get pressure inside and it caused problems all game long.  They’ve made some progress running the football, but they’re still a long way from where they were at this point last season.

It’s frustrating.  It’s about to be week 15 and the Patriots aren’t any closer to solving their offensive problems than they were coming into Sunday’s contest.  The one positive they can take away is the fact that despite all their issues, they fought, they never gave up and they were in the game right until the end but just came up short.

Maybe that’s just how it’s going to be for the rest of the season.  With the Bengals, Bills and Dolphins left on the schedule, the Patriots still have a chance to run the table and put themselves in position for a top playoff seed.  The rematch against Buffalo remains the biggest concern, although the Patriots will at least play the next one on their terms in Foxboro having already beaten the Bills once on the road earlier this season.

Should they put themselves in a position with a high enough playoff seed to sit out the first round, all bets are off.  After all, there were similar questions heading into last year’s postseason and after two weeks to get a little healthier and work things out, the Patriots came out of the bye looking like a completely different team and they took care of business in the postseason.

Unfortunately, getting there remains the challenge and it’s obvious that this team still has quite a bit to figure out if they have any hope of making it that far.  One thing we know is that they still face an uphill battle as they head into this stretch with an offense that hasn’t gotten out of neutral all season.

Whether or not they can ultimately kick things into gear remains the biggest question.  At 10-3, things could definitely be worse and with Belichick and Brady, they remain a team that could still surprise everyone in the coming weeks.

Unfortunately, this loss is simply another reminder that they’ve still got a long way to go if they want to ultimately pull off another surprising turnaround.  After what we saw Sunday, it definitely looks like they have their work cut out for them and they’re running out of time if they hope to figure it out.